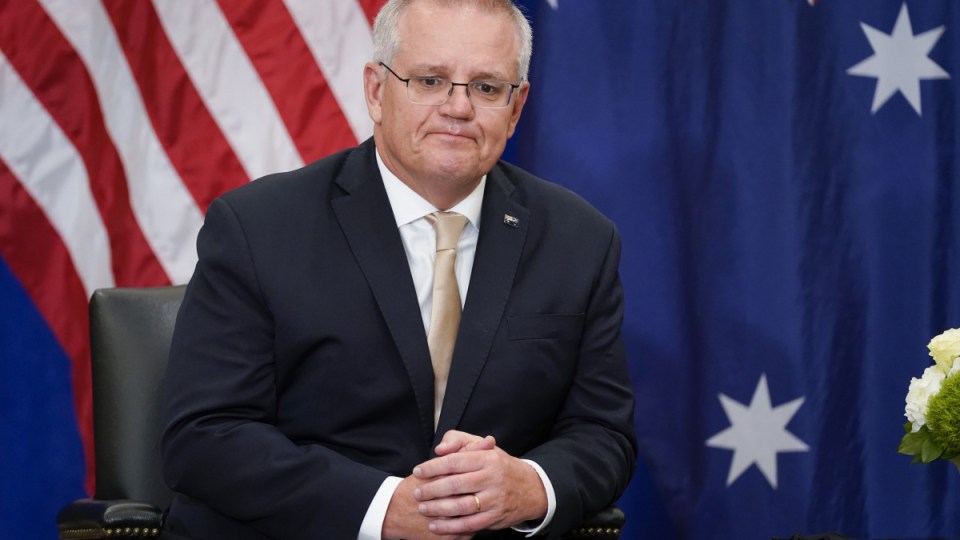 Scott Morrison is running out of time to announce a 2050 net zero target. Photo: AAP

Scott Morrison has 27 days to break a decade-long impasse on climate change.

Again holed up in The Lodge for two weeks of quarantine, Mr Morrison could face an uncertain political future if he fails to stitch together a plan that goes far enough to satisfy his inner-city Liberal MPs, without going so far as to anger his rural Nationals MPs.

Mr Morrison’s plan must also be ambitious enough for Australia to dodge global knuckle-dragger status at the Glasgow climate summit.

And he has less than four weeks to get it over the line.

Yet for all the years of climate dithering; for all the months of Mr Morrison “inching” towards more ambitious goals; and for all the weeks of moderate Liberals calling for greater action while the Nationals dig in their heels to demand firmer plans; it seems there is still no finalised proposal for Coalition MPs to debate.

For months, the Prime Minister has been moving in the direction of a net-zero target – slowly building the case for it and talking up the benefits for the regional communities that the Nationals say will suffer most from the transition.

The talk had been that Mr Morrison would officially commit to the target in Glasgow.

Yet in a thinly veiled admission of the difficulties he is having balancing the concerns of inner-city Liberals on the one hand, and hesitant rural Nationals MPs on the other, Mr Morrison told Channel Seven just last week he was trying “to bring my government together”.

“I’m keen to ensure I bring people together on this so Australians can have confidence we are dealing with climate change, that we care deeply about their concerns about what the change means for them,” the PM said.

With less than four weeks to go until COP26, such difficulties appear to be unresolved.

The government has still yet to show the Nationals the all-important plan for how it will get to net zero by 2050 – let alone debated or agreed to it.

Indeed, it’s still unclear whether Mr Morrison will even commit Australia to the goal, or just stick to his recent rhetoric that the nation would “preferably” reach net zero by 2050.

All this yet to be decided and with only 27 days to go. Talk about cutting it fine.

With the likes of Barnaby Joyce (“Tell me what it costs”), Matt Canavan (“deadset against it”) and Keith Pitt (“deadset against doing dumb things”) likely to take a lot of convincing – not to mention the Nationals putting off discussions of their own until they can meet in person in Canberra in two weeks’ time – the clock really is ticking.

The timing could see Parliament’s next sitting from October 18 once again explode over climate.

Of course, it doesn’t have to be like this.

Indeed, the fact Australia is even having this debate, on the eve of COP26, speaks to how far Australia trails behind other developed nations.

In the hysteria and madness of Australia’s debate, it’s easy to forget net zero by 2050 is actually an uncontroversial and unambitious target by world standards. It’s a goal to which Australia’s closest allies and trading partners have long since signed up, with many pledging far more ambitious targets while the Coalition dithers on this first step.

British Prime Minister Boris Johnson, a conservative with whom Mr Morrison enjoys a close personal relationship, is one of the world’s more strident advocates for net-zero emissions and has pressured Australia to do much more.

At Glasgow, nations are expected to outline impressive emissions reduction goals to achieve by 2030 or 2035.

Sky News reported on Sunday that Mr Morrison may make a special climate change address before Glasgow, potentially locking in a stronger 2030 or 2035 emissions goal in addition to net zero by 2050.

If that’s the case, that would set up a furious flurry of activity in Canberra in two weeks’ time, with agreement needed to be reached in the next parliamentary sitting fortnight.

A stronger short-term target would go some way to answering critics who claim the focus on net zero by 2050 is partly to avoid a debate on more ambitious action before then.

Professor Will Steffen, one of Australia’s leading climate scientists, called net zero by 2050 “a furphy”.

“It means they can put off meaningful action now,” he said.

“The real critical action that will be the determining factor in where climate goes is between now and 2030.”

History to be written

Delay seems to be the watchword of Australia’s climate debate.

It’s 14 years since Liberal PM John Howard committed to an emissions trading scheme; 12 years since Malcolm Turnbull was rolled as opposition leader over his support for Labor’s carbon pollution reduction scheme; and 11 years since Kevin Rudd’s first prime ministership was blown up when he shelved those plans.

It’s nine years since Julia Gillard’s carbon price; seven years since Tony Abbott’s government abolished it; and three years since Mr Turnbull was rolled as PM, in another backbench coup over energy and emissions.

Now, with the world quickly moving on to more ambitious goals and watching with disappointment as Australia’s debate remains stuck in the past, Mr Morrison will write the next chapter in our climate story.

Will it be forward-looking, putting Australia back on the world map as a climate leader? Or will it be yet another squib, another missed opportunity consigning us to remain a global laggard?

Other articles in this series include an analysis of the financial costs of climate inaction, and a review of what other countries are saying about Australia’s climate change record.

Road to net zero: Scott Morrison has less than a month to unite his government