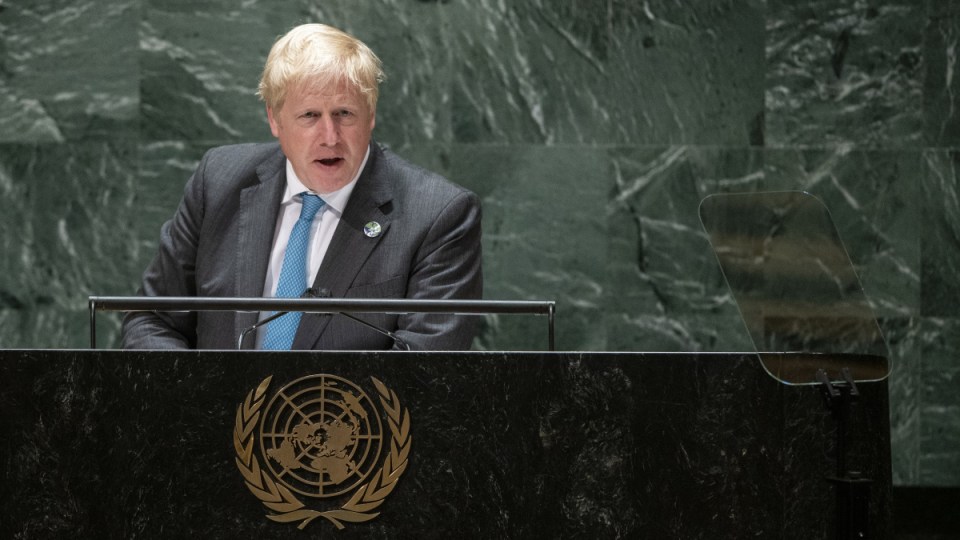 Boris Johnson has compared humanity's approach to climate change to that of a risk-taking teen. Photo: Getty

British Prime Minister Boris Johnson has told world leaders at the United Nations that humanity has to “grow up” and tackle climate change, saying humans must stop trashing the planet like a teenager on a bender.

Mr Johnson is due to host a major UN climate summit in Scotland in six weeks and is using a trip to the UN General Assembly in New York to press governments for tougher emissions-cutting targets and more money to help poor countries clean up their economies.

In a speech on Wednesday (local time), he said it was now or never if the world was to meet its goal of limiting the global temperature rise to 1.5 degree above pre-industrial levels.

“If we keep on the current track, then the temperatures will go up by 2.7 degrees or more by the end of the century. And never mind what that will do to the ice floes,” Mr Johnson said.

“We will see desertification, drought, crop failure, and mass movements of humanity on a scale not seen before.

“Not because of some unforeseen natural event or disaster, but because of us. Because of what we are doing now.”

Mr Johnson compared humanity to an impetuous 16-year-old – “just old enough to get ourselves into serious trouble”.

“We have come to that fateful age when we know roughly how to drive and we know how to unlock the drinks cabinet, and to engage in all sorts of activity that is not only potentially embarrassing but also terminal,” he said.

“We trash our habitats again and again with the inductive reasoning that we have got away with it so far, and therefore we will get away with it again.

“My friends, the adolescence of humanity is coming to an end. We must come together in a collective coming of age.”

Hopes for a successful Glasgow summit have been boosted by announcements this week from the world’s two biggest economies and largest carbon polluters, the US and China.

China’s leader Xi Jinping said his country will no longer fund coal-fired power plants abroad, while US President Joe Biden announced a plan to double financial aid for green growth to poorer nations to $US11.4 billion ($A15.7 billion) by 2024.

Britain has pledged to reduce its carbon emissions to net zero by 2050, and Mr Johnson has championed the expansion of renewable energy, saying Britain could become the “Saudi Arabia of wind”.

But he is under fire from environmentalists for failing to scrap new North Sea oil drilling and a proposed new coal mine in north-west England.