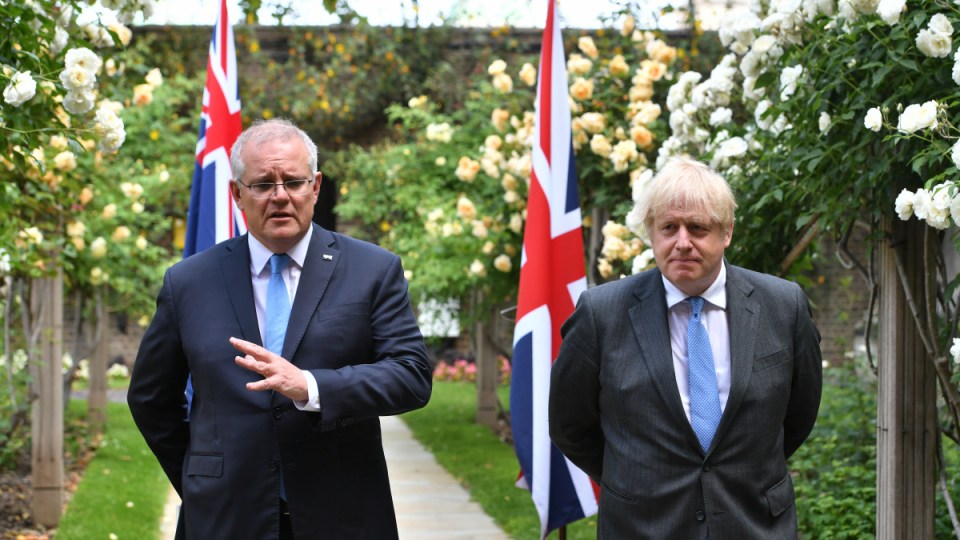 Boris Johnson has 'been clear' when he has met Scott Morrison that Britain wants Australia to do more, the high commissioner says. Photo: AAP

Mr Morrison is yet to confirm if he will head to November’s meeting as the federal Coalition wrangles to get conservative Nationals on board with a goal for net zero emissions by 2050.

British high commissioner to Australia Victoria Treadell said Britain would be “very disappointed” if Mr Morrison did not attend and instead sent a minister.

“We’d very much love him (Mr Morrison) to attend. We haven’t received confirmation one way or the other. But I know that a decision will be pending so we remain hopeful,” she told ABC radio on Wednesday.

“But whatever the level of participation, we would still be asking the same requirement of Australia for a yet more ambitious position on climate action.”

“It’s great too that Prime Minister Morrison says ‘preferably’, but we would like preferably to be converted to a firm commitment,” Ms Treadell said.

“Prime Minister [Boris] Johnson has been clear every time that they have met that he’s looking for higher ambition.”

She praised the stance of the NSW government, which has got its Nationals partners on board with a plan to halve emissions by 2030.

“This is an economic imperative. Financial and capital markets are already preparing for a lower emissions net zero future. That means investments are being geared in that direction,” Ms Treadell said.

NSW Environment Minister Matt Kean doesn’t see acting on climate change as a choice between the environment and the economy.

“It will not only set our state up for success in the areas of industry and electricity and electric vehicles, but it will also support agriculture,” he said.

“This is not about hurting our farmers, this is about supporting them and making them more profitable.”

Federal Finance Minister Simon Birmingham insisted a net-zero goal was right for the environment and economy. But he maintained Nationals politicians opposed to the target were asking the right questions.

“We are considering these issues in parallel to make sure we can take the strongest possible position to Glasgow.”

A report by the Beyond Zero Emissions think tank suggests Australia could reap $333 billion by 2050 from selling green energy overseas.

It wants the federal government to set up a $100 billion green export target by 2035 for renewable hydrogen, critical minerals, and green steel and aluminium,

It has also called for green exports to become the focus of foreign affairs and trade policy.

The group has proposed a five-year plan to establish 14 renewable energy precincts and a $20 billion lending authority set up to support large-scale investments in the energy grid.