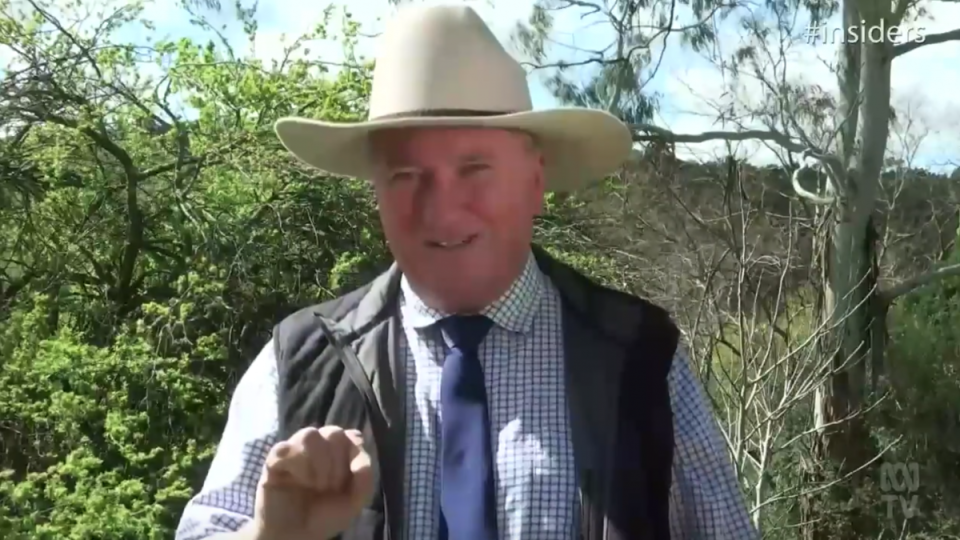 Australia faces another ugly political fight over net-zero emissions, with acting Prime Minister Barnaby Joyce and the Nationals yet again refusing to sign up to the key target.

Fracturing inside the junior Coalition partner has now resulted in former minister and Joyce critic Darren Chester temporarily walk out on the Nationals, blaming a “failure” of leadership.

PM Scott Morrison was on his way home from Washington DC when Mr Chester made that announcement.

Mr Morrison now has just five weeks to finally win over the Nationals and stitch up a long-delayed agreement on net zero, before he is expected to formally commit to the policy at November’s United Nations climate summit in Glasgow.

“We look at it through the eyes of making sure that there is not an unreasonable loss of jobs or any loss of jobs in regional areas,” he told the ABC’s Insiders on Sunday.

The Nationals, the Liberal Party’s partner in the Coalition government, would have to sign off on any net-zero move.

Mr Joyce has repeatedly railed against a net-zero target in interviews over recent months, complaining that the government had failed to set out its cost or present a “menu” of options.

On Sunday, he appeared warmer to the prospect, but warned any such target should not “pull the economic rug out from underneath” the regions.

One of Mr Joyce’s tests was that it must include keeping Australia’s mining industry operating.

Mr Morrison said on Sunday he had been trying “to bring my government together on this issue”, hinting at the difficulties reconciling Liberal and National views on the issue.

“What I’ve been working to do is to bring my government together to get a plan that we can take to the Australian people,” the PM told Seven’s Sunrise.

“I’m keen to ensure I bring people together on this so Australians can have confidence we are dealing with climate change, that we care deeply about their concerns about what the change means for them.”

Senator Canavan, a key Joyce ally, tweeted he was “deadset against net zero”, claiming it “would just make us weaker”.

Mr Morrison says he wants a “technology, not taxes” approach to hitting the target.

On Sky News on Sunday, Mr Littleproud said he expected a technology roadmap would soon be presented to the National Party.

“Never pre-empt the National Party party room. That is always a dangerous thing to do,” Mr Littleproud said.

“But I think you’ll find they are pragmatic members and senators, all 21 of us. We need to look through this through the lens of opportunity, not just cost, and I think this is where National Party members are pragmatic.”

The Nationals’ split was further highlighted when Mr Chester, a more moderate voice in the party room, announced on Sunday he would “take a break” from the party for several weeks.

He stressed he wasn’t quitting the party, and planned to contest the next election for his seat of Gippsland, but said he needed “time away” from the Nationals “to reflect on a number of significant issues”.

“My decision follows months of frustration with the repeated failure of the leadership to even attempt to moderate some of the more disrespectful and offensive views expressed by a minority of colleagues,” Mr Chester said.

The debate has been running for some time, but Mr Morrison now faces an immovable deadline.

He is due to attend the United Nations COP26 climate summit at the beginning of November in Glasgow, where he must update the world on Australia’s environmental goals beyond those agreed in Paris in 2015.

Mr Morrison is expected to formally confirm Australia’s net-zero goal by 2050 at the summit, or risk further global ostracism.

A ‘roadblock’ to progress

“It’s very clear that they are completely divided when it comes to climate change,” he said.

“Australia remains a pariah whilst we don’t adopt net zero by 2050. This is a target that’s been adopted by every state and territory government in the country, by all of our major trading partners in the developed world.”

Until relatively recently, some Labor figures had wondered if Mr Morrison would call an election for November or December and avoid attending the Glasgow summit, thereby further delaying any net-zero commitment.

The tension inside the Coalition on emissions was highlighted by Liberal MP Jason Falinski calling Senator Canavan’s claims “disingenuous” and “not right”.

Mr Falinski, from Sydney’s northern beaches, supports a net-zero target but is likely to face a pro-climate independent challenger at the next election.

Mr Morrison was last week praised by US House speaker Nancy Pelosi for “leading the way” on climate.

Sunday showed there is still some way to go before both sides of the Coalition can agree on net zero.