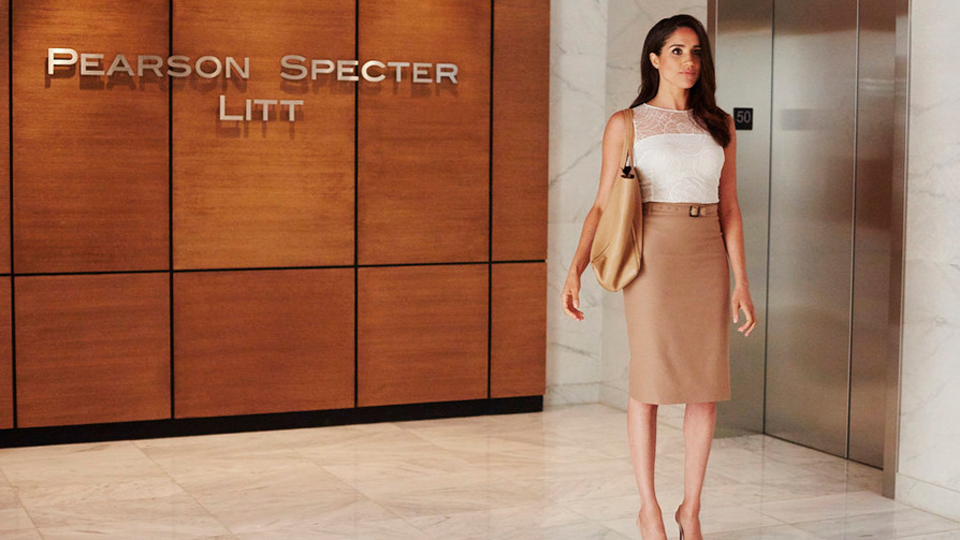 Meghan Markle (in Suits) could soon be walking Hollywood's halls of powers again, Harry by her side. Photo: USA Network

Staff at Prince Harry and Meghan Markle’s Windsor home Frogmore Cottage were “let go” on Friday, ahead of the move by the couple formerly known as senior royals to a new life in Canada.

Harry and Meghan themselves are in a similar boat to their ex house manager and cleaner – the Good Ship Unemployment – but their professional prospects as they ditch family handouts and strike out to make their own money are more dazzling.

That’s according to Hollywood publicists and power brokers, who spoke with The Hollywood Reporter about how the Sussexes might go about bringing home the bacon.

And while the pair has registered over 100 items under the Sussex Royal trademark, they’re much more likely to be planning world domination based on showbiz than novelty pyjamas.

“If Meghan called anybody right now, believe me, we’d all run to the phone,” said Bill McGoldrick, president of original content at NBC Universal Entertainment Networks.

She and Harry are likely to broker a series of Obama-style “info-tainment” pro-social deals, to “raise money and make movies that are about issues that are important to her,” McGoldrick said.

While Meghan’s former agency, Gersh, is saying nothing, a speedy return to acting is “off the books for the moment,” Nick Bullen, co-founder of royal-focused SVOD service True Royalty, told THR.

Security and insurance costs would be prohibitive, and any Markle role could be seen as “stunt” casting, according to a talent agent.

Still, predictions are that the fame and intrigue around the Sussexes’ story is “probably unparalleled at the moment,” and could spark a bidding war among streamers or networks.

“They could make hundreds of millions of dollars,” noted PR veteran Howard Bragman.

What is certain is master planner Meghan will be leaving nothing to chance in launching the Sussexes’ new projects.

She met with her former Hollywood agent Keleigh Thomas Morgan from Sunshine Sachs before Christmas to crank out a blueprint for Harry and Meghan’s new charity and money spinning endeavours.

Some of it might be hard for Harry, who has long been pricked by what he calls the “relentless propaganda” of the British media and will now perhaps find himself in even sharper hands.

Without the protection of the practised and protective palace spin machine, the “paranoid” duke will instead be relying on Hollywood agents for PR advice.

“It seems a little counter-intuitive for him now to be entrusting his reputation to spinners, lawyers and business managers more concerned with their 10 per cent cut than an allegiance to Queen and country,” The Telegraph said.

Cut off from family and longstanding friends – many old chums haven’t had his phone number since his marriage, according to People – Harry’s inner circle will now by largely Meghan’s friends and contacts.

Another tricky part for the prince in adjusting to his role as Harry Wales could be that he may have to play “second fiddle”, as it’s been put, to his full-tilt wife.

While Meghan never cracked it for an Emmys invite during her seven years on Suits, she was snapped at a Weinstein Company Golden Globes after party in 2012, and a year later at NBC’s post party.

Meanwhile, despite her public blessing, the Queen is “desperately trying to find some way to keep the doors open for Harry” if he wants to come home in a few years, according to royals author Tina Brown.

“Not alienate him because who knows, this could be like a year’s experimental thing and then he’s going to want to come back into the royal family.”

While his family wants him back, Canada’s biggest newspaper The Globe and Mail feels the opposite, telling the Sussexes in a sucker punch editorial they are not welcome.

“Canada is not a halfway house for anyone looking to get out of Britain while remaining a royal,” the paper said, telling the Trudeau government to just say “no” to Harry and Meghan.

“Our royals don’t live here. They reign from a distance. Close to our hearts, far from our hearths. If you’re a senior member of our royal family, this country cannot become your home.”

Meghan and Harry could make ‘hundreds of millions’ in Hollywood