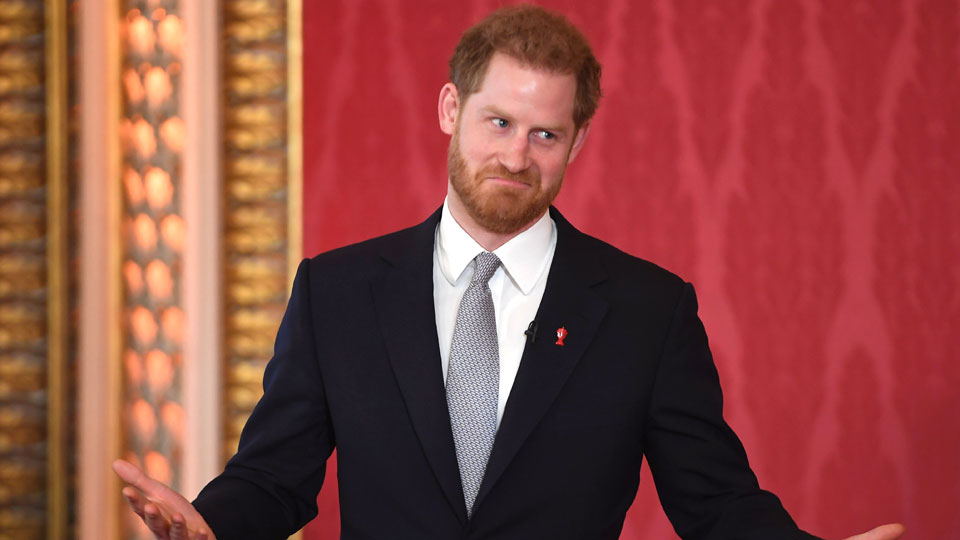 A cheerful Prince Harry has fronted the world for the first time since he and wife Meghan Markle announced plans to quit life as senior royals to hang out their business shingle.

And because the engagement will also likely be his last official royal duty as a fully fledged member of ‘The Firm’, the normally routine job was suddenly historic.

Before that, the duke watched children play on a pop up rugby pitch in the palace’s back garden. When a reporter shouted, “How are the discussions going on your future?” Harry smiled but said nothing.

The duke also announced a mental fitness charter for the tournament in a video posted to the Sussex Royal Instagram account. It was quickly decoded for subliminal messages.

Looking slightly heavy eyed, Harry talks about “a community that takes care of its own” as the Stone Roses’ hit This is the One plays in the background. One lyric?: “I’d like to leave the country”.

Ahead of time, it was said the vibe at the palace was “likely to be tense”.

According to Vanity Fair, some courtiers are “angry and upset” with Meghan and Harry’s handling of their semi-abdication, despite the Queen giving it her blessing at the Sandringham summit.

It’s not just staff who are feeling the pinch, but Harry too, a friend told the site.

“He is saying that he is fine, but I know him well and he’s not fine. He loves his family and this fall out will be heartbreaking for him,” the source said.

“That said, he is very loyal to his wife and he wants her to be happy.”

An “isolated” Harry has also slowly shed many of his trusted childhood friends since marrying Meghan, reports claim.

“Most no longer even have his [mobile phone] number,” an ‘insider’ told People.

“They totally understand that men often drift from their friends after marriage, but there’s still a lot of resentment because they had been close for so long.”

Like Harry, on Thursday Meghan broke cover for the second time after leaving son Archie, 8 months, behind on Vancouver Island while she caught a seaplane to the mainland.

The duchess, 38, showed up to support a feminist climate change group called Justice for Girls. She was again dressed down in leggings and a loose cashmere jumper.

Yesterday, The Duchess of Sussex, Meghan Markle visited to discuss climate justice for girls and the rights of Indigenous peoples. Was great to talk about the importance of a holistic approach to social justice, and the power of young women’s leadership. #DuchessOfSussex pic.twitter.com/M9LaqEELl7

A day earlier, her visit to a vulnerable women’s centre was reportedly organized by Meghan’s assistant, who sent a “mysterious” email from a Hotmail account shortly before the duchess arrived.

When Harry joins Meghan in Canada, they “plan to hit the ground running” work wise, a source told the Daily Mail: “There will be more private engagements and you’ll be seeing a lot more on social media.”

Harry and Meghan said on their website while announcing their brave new world that they plan to replace traditional royals reporters with “specialist media” and “up-and-coming” journalists.

It came after the couple sued the Mail on Sunday for what they say is the unlawful publication of a letter sent by Meghan to her apparently estranged father Thomas Markle.

If the case proceeds, both the duchess and her dad may have to testify in court, which will expose the Sussexes to the sort of media scrutiny they have made clear they wish to avoid.

Harry reportedly has a handful of private engagements in the UK next week as attempts to finalize the Sussexes’ plans continue.