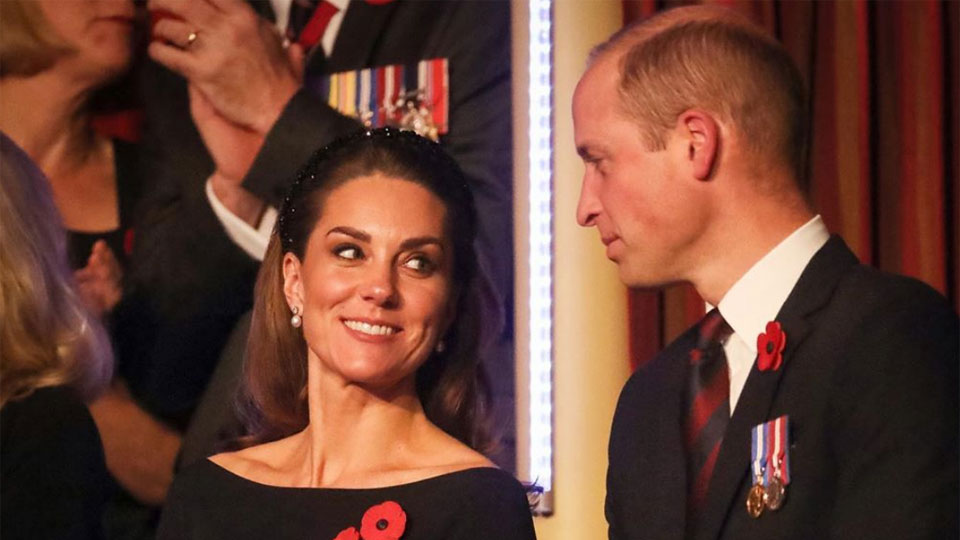 Pegged as a dramatic reunion between two couples with tensions and unresolved rivalries, the first public coming together in months of Meghan Markle and Prince Harry and Kate Middleton and Prince William was a fizzer.

Theatrically, at least. There was no pantomime-worthy last minute twist or set jaws, just two couples obliged to go out with their grandmother and assorted aunts and uncles on a Saturday night.

The royal couples, dubbed the ‘Fab Four’ before they disbanded their charities and courts earlier this year, attended the Royal British Legion Festival of Remembrance at the Royal Albert Hall on November 9.

Almost every working member of the royal family showed up, including the Queen and her beleaguered son Prince Andrew.

The Duke of York has kept a low profile since being drawn into the Jeffrey Epstein child sex trafficking scandal but was given a great seat between the Duchess of Cornwall and Prime Minister Boris Johnson as if it was all business as usual.

Kate and William, for the record, had a more prestigious placing next to the Queen. Meghan and Harry were demoted to the second row, with Princess Anne’s husband Tim Laurence even closer to the monarch.

The Sussexes and Cambridges were last seen together at an official engagement at June 8’s Trooping the Colour, where they stood at opposite ends of the Buckingham Palace balcony.

Tonight, members of the Royal Family are at the Royal Albert Hall for the Festival of Remembrance. The annual event, held in honour of those who have given their lives in the service of their country, has been marked since 1923. Tomorrow, Remembrance events culminate in the Cenotaph service on Whitehall which will be attended by more than 10,000 veterans and serving members of the Armed Forces. 📸 Press Association

There was speculation ahead of the event that things could be awkward between Harry and William after the younger prince’s revelation in an interview pegged to his tour of South Africa with Meghan that he and the future king are “on different paths.”

This was hardly headline making news. Since their births, it’s been known William is the heir, Harry the spare, and one has much more freedom than the other.

More telling was Harry’s openness about his love for William.

“Part of this role and part of this job and this family being under the pressure that it’s under … stuff happens,” he said said.

“We don’t see each other as much as we used to because we’re so busy but I love him dearly.”

That business has meant that the last time the Sussexes and Cambridges were out together was in July at a charity polo day in Berkshire.

The royal wives minded their children while the princes saddled up.

Four days earlier, they had gathered behind famously closed doors for the christening of Harry and Meghan’s son Archie.

In a rush on gatherings, the royals will also step out at London’s Cenotaph for a Remembrance Sunday on November 10.

Harry and Meghan have had a busy week at work – on November 7 they laid wreaths at the 91st Field of Remembrance at Westminster Abbey, Meghan in slouch boots, a Sentaler coat and Philip Treacy fascinator – ahead of a reported six weeks off from royal duties.

According to The Sunday Times, the Sussexes are taking Archie to America to spend Thanksgiving with the duchess’ mother, Doria Ragland, in Los Angeles.

The public may not see them again before Christmas, when they are expected to rejoin the Windsors at Sandringham for family celebrations.

“The duke and duchess have a full schedule of engagements and commitments until mid-November, after which they will be taking some much-needed family time,” a royal source said.

Meghan and Harry reunite with Kate and William after ‘rift’ interview