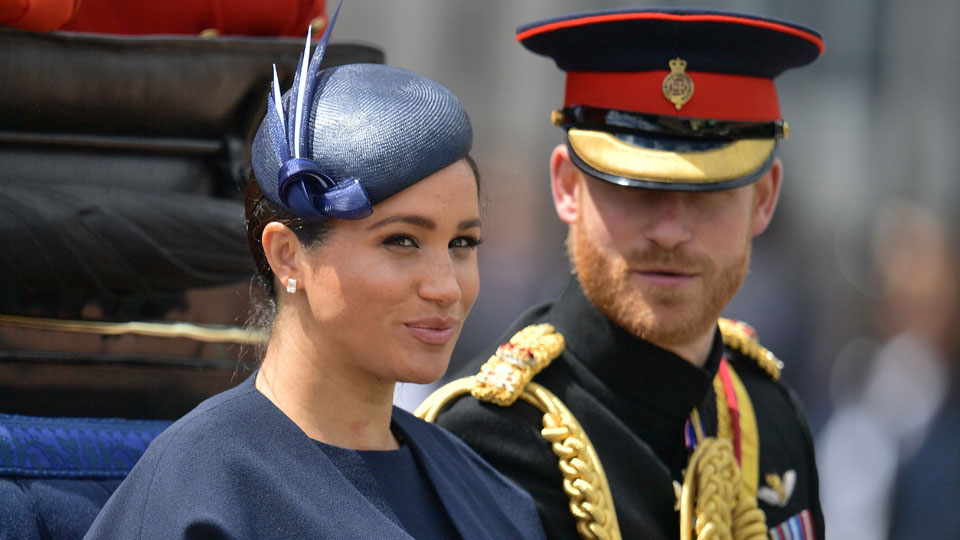 New parents the Duke and Duchess of Sussex at June 8's Trooping the Colour in London. Photo: Getty

Meghan Markle left son Archie for a couple of hours to join the royal family for the annual Trooping the Colour celebration in honour of the Queen’s birthday on Saturday.

Five weeks after giving birth to her baby on May 6, the Duchess of Sussex broke her maternity leave to sit next to husband Prince Harry in a  horse-drawn carriage for the ride down The Mall to Buckingham Palace.

But Meghan’s return to public life was perhaps overshadowed by Prince Louis, 1, whose enthusiastic waving display during his Buckingham Palace balcony debut stamped him as a royal to watch.

Apart from the Queen’s own carriage, Meghan’s was easily the most A-list of the day. Kate, Duchess of Sussex, and Camilla, Duchess of Cornwall, travelled with Meghan and Harry, 34.

The foursome chatted easily during their journey, waving to royals fans lining the route.

The former Suits actress, 37, wore a hat by Noel Stewart.

Kate, 37, struck a more summery note than Meghan in a pale yellow dress from her current go-to designer Alexander McQueen.

Her flower-laden hat was by Philip Treacy, the Irish designer worn this week by Melania Trump for her UK visit.

Thanks to his status as a Royal Colonel of the Household Division, Kate’s husband Prince William, 36, was on horseback in the procession.

The Cambridges and Sussexes have injected glamour to Trooping the Colour, which was once just another semi-fusty date in the royal calendar.

But best dressed on the day wasn’t Kate or Meghan. Sophie, Countess of Wessex, 54, looked fabulous in a bright green dress with sculptural black hat as she rode with husband Prince Edward, 55.

Edward made his own style statement: medals, frogging and an astonishing beret.

One of Sophie’s past daring fashion choices, a pink dress with black lace detail worn to Ascot last year, appeared to have been recycled by her niece, Princess Beatrice, 30.

Beatrice wore the dress riding with sister Princess Eugenie, 29, to celebrate their grandmother’s 93rd birthday, which happened in April.

A tradition dating back 260 years, Trooping the Colour sees 1400 soldiers, 200 horses and 400 musicians parade to mark the Queen’s official birthday.

It closes with an RAF fly-past which is watched by the royal family from the Buckingham Palace balcony.

Before Louis’ wild waving demonstration, he and sister Princess Charlotte, 3, were seen watching the action from a palace window. Big brother Prince George, 5, kept his powder dry until the balcony appearance.

The happy family occasion was soured earlier in the day by news that Prince Harry and Meghan’s wedding photographer was hacked and the couple’s private snaps leaked on social media.

Multiple reports claimed a royals source said “hundreds of photos” taken by photographer Alexi Lubomirski in May last year were taken in the online breach.

Meghan Markle returns to public life at Trooping the Colour