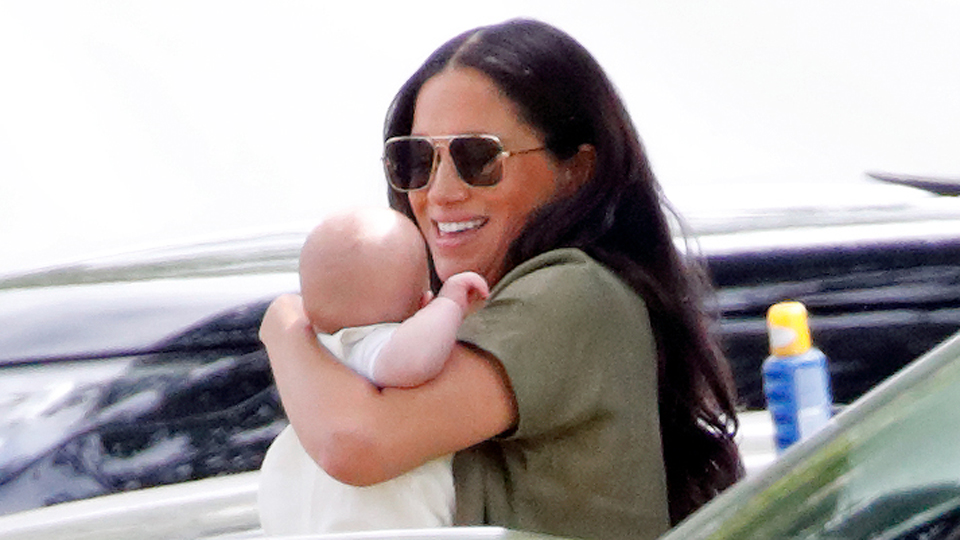 Meghan Markle did something this week no senior royal has ever done before. And it wasn’t wearing a denim jean to Wimbledon.

No, the Duchess of Sussex was much more radical, or as her critics would say, ‘protocol breaking’. She looked after her own baby in public.

Incredible, yes? There was Meghan on Wednesday, her hair and Lisa Marie Fernandez dress both loose, no makeup on, watching her husband Prince Harry play a charity polo game.

And clutched to her chest was eight-week-old son Archie, pale little legs dangling from an everyday onesie.

Seeing him out of Frogmore Cottage captivity was startling enough, given his parents’ effort to keep his July 6 christening under wraps, but Archie’s lack of entourage was even more fascinating.

Royals simply don’t bring their babies out with them unless they’re in a foaming heirloom gown to reject the glamour of Satan. They certainly don’t go anywhere with a baby without a nanny dressed in those terrifying Crimean war era uniforms and ready to do any dirty work.

Kate Middleton, who was at the polo with Meghan – well, she sat nearby – has a rule never to bring her children out until they’re one. That meant Prince Louis made his polo debut the same day Archie did.

Yet there was Meghan, doing it herself, probably inwardly panicking slightly that Archie would need a feed or nappy change. Remember, this was her first time out in the actual world with her baby.

And all the baying British media and public saw was a woman who didn’t look totally comfortable cradling her newborn.

The mom-shaming of Meghan’s baby holding style (and to be honest, if I ran into her in the street I’d advise a muslin wrap to turn Archie into a nice neat parcel) was the fourth salvo directed at the former actress in a week.

She copped it for wearing the afore-mentioned denim to Wimbledon, where she didn’t sit in the Royal Box and didn’t break any dress codes, according to the All England Lawn Tennis Club itself.

Meghan took a second hit when her security officer asked photos not be taken of the duchess. There’s no proof Meghan herself was behind the directive, or that it even happened. Still, it prompted global headlines about her “nightmare” behaviour.

Before that, of course, was Christening Gate, when it seemed likely for a time that a horde carrying flaming torches and pitchforks might march on Windsor Castle, desperate to see a kid dipped in water by a man in a dress.

“Diana would never have done it,” thundered Allison Pearson in The Telegraph in a story headlined ‘It’s time Meghan was taught a well-known British phrase: Get over yourself, love.’

No, she wouldn’t. But then, Diana didn’t have much, if any, choice in her royal life, and look how well that ended.

Given their apparent desire to suddenly join in the royals’ spiritual life, the UK media and all its subjects should be on bended knees at church and giving thanks there are plenty of things Diana did that Meghan won’t.

But no. A fully-formed independent woman with a brain and apparently warm heart is being monstered for ridiculous nothings at a time when she’s a new mum whose own mother and circle of friends are an ocean away.

Britain has already broken one Windsor princess. Their latest toy, so shiny and interesting one short year ago, is in danger of being played with so cruelly that she comes apart at the seams too.

Meghan Markle is the Windsors’ latest princess in peril