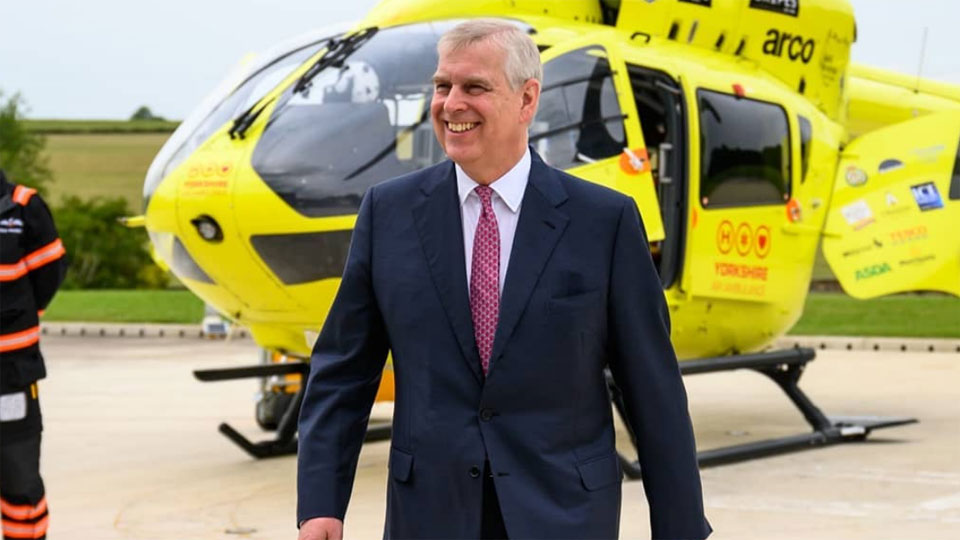 Prince Andrew (in Yorkshire on July 10) has not spoken to the Australian media during his visit to Perth. Photo: Instagram

Even as his nephew Prince Harry dad danced like a gun, defused landmines and threw hand grenades at the media on his tour of South Africa, Prince Andrew is taking a different tack in Australia.

The beleaguered Duke of York, 59, landed in Perth on Monday and has since carried out his meetings with no fanfare and almost no media coverage.

Buckingham Palace has not posted any photos or mentions of Prince Andrew on its Royal Family Instagram account this week, instead peppering its feed with snaps of Harry, Prince William and Princess Anne.

While the palace called it a “working visit”, its official list of future royal engagements has no mention of Andrew for the next six months.

In that almost secretive vein, the Queen’s third child is due to attend a presentation at Government House on Friday, but will not meet the governor and won’t be feted as a guest at the official residence.

“We’re not hosting him,” a Government House spokesperson told The New Daily.

“He’s attending an event in our ballroom, which we often hire out for external events.”

The low-key approach to the business trip to Western Australia comes amid global scrutiny over the duke’s friendship with late pedophile financier Jeffrey Epstein.

Epstein hanged himself in a New York jail cell in August while awaiting further charges.

The FBI’s investigation into his activities continues.

The bureau is actively seeking those who could provide information on the duke, according to a Sunday Times report on September 30.

Australian woman Virginia Roberts Giuffre alleges the royal had sex with her when she was a teenage ‘sex slave’ for Epstein, which Andrew has called “false” and “without foundation”.

The allegations have provided a tough backdrop for the trip by Andrew, whose royal status won’t protect him during the Epstein probe.

Even Prince Edward’s visit to Melbourne and regional Australia in 2018 to promote the niche sport of real tennis was more spotlit.

When the prince spent Wednesday at Perth’s Murdoch University, a media contingent was kept behind a rope in a courtyard as the royal visitor was pitched ideas from entrants in the Pitch@Palace entrepreneur competition.

Andrew founded the initiative five years ago and on past visits to Australia has been keen to talk it up. His last trip here was in 2018.

Congratulations to the 42 Entrepreneurs who took part in #pitchatpalace Australia 3.0 Boot Camp today!

This week no questions were fielded by Andrew, who is staying in a $1500-a-night suite at Perth’s Como The Treasury hotel, said reports.

At the university, he was greeted by a single fan, local school teacher Renae Grljusich-Poolman, according to The Australian.

The diehard royals fan – she discussed “women’s rights and women’s empowerment” with Queen Maxima of the Netherlands in Perth in 2016 – said the almost non-existent turnout for Andrew was “disappointing”.

It may also be fortunate for the prince at this time.

“The controversy around Epstein and the linked relationship has been widely reported,” crisis management strategist Nicole Reaney from Sydney’s InsideOut PR told The New Daily.

“There is likely a concern that comments would be taken out of context or edits made, which could be further damaging.”

But Ms Reaney added that avoiding the press is never a good idea.

“You can’t stop the media from running a story,” Ms Reaney said.

“This kind of evasion can actually have the reverse effect, where a series of media stories are published with Prince Andrew having no control to the final message.”

Deputy premier Roger Cook said WA taxpayers did not foot any of the bill for the Perth visit because Andrew was here on behalf of private organisations.