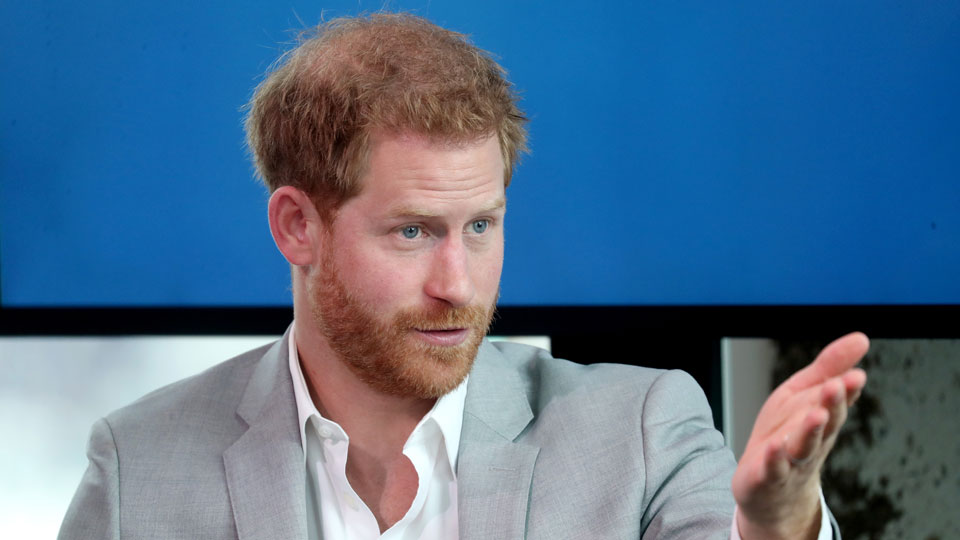 How bizarre to hear the Queen’s grandson Prince Harry defending his use of private jets by saying sometimes the “unique circumstance” of ensuring his family’s safety made it essential.

As veteran royals commentator Richard Kay advised the duke, “When you’re in a hole, stop digging”.

Harry fought his corner in Amsterdam where he was launching an eco-tourism initiative, which itself is – depending on where you stand – either a marvellous contemporary interpretation of his official role or the latest in a slow grubbying of the royal family through business.

While Harry probably has the best of intentions, he and Vogue guest editor turned fashion designer wife Meghan Markle are veering more down the path of cash-grabbing Sarah Ferguson with her Budgie the Little Helicopter books than Princess Diana and her landmines.

The duke, 34, insisted on Wednesday (Australian time) he wouldn’t fly privately by choice if there were other options – like, only Gulfstreams go to France.

He also admitted “we can all do better” with sustainable travel.

“While no one is perfect, we are all responsible for our own individual impact,” said Harry, who flew commercial to Amsterdam and said he does it “99 per cent” of the time, a claim later disputed.

“The question is what we do to balance it out.”

As to the answer, Harry was short on detail, long on waffle about the vexed issue of how to square being a prince of the blood who loves travel with being an eco-warrior.

Should we all start moving around by slow boat or is ticking the carbon offset box enough? Harry seemed more for the latter; we need to make it “cool” he said.

Because he was spruiking for Travalyst, a collaboration of five big . companies including Booking.com and Skyscanner, the prince didn’t mention summering in the backyard of your own castle is also an option.

He did talk “symbiosis”.

We are excited to announce the launch of ‘Travalyst’, a global initiative striving to change the impact of travel, for good. Partnering alongside key travel industry giants @Bookingcom, #Ctrip, @Skyscanner, @TripAdvisor and @Visa_US, our aim is to spark a movement to transform the future of travel, putting communities at the heart of the solution. We believe in the power and importance of travel. We also have a shared responsibility to our planet and to each other. • “I want to start with a little bit of background as to specifically why I’m here today, because as you may know, I am not a tourism or business expert, but through my travels I have observed the unique relationship between community and environment, and have noticed something alarming. There wasn’t the symbiosis or connection there needed to be and I wanted to understand why. I am one of those people fortunate enough to have a platform and I want to use it to tackle hard problems, in the hope of finding solutions…and that’s how Travalyst was born” – The Duke of Sussex The name #Travalyst comes from The Duke and partners viewing our role in sustainable travel as catalysts to accelerate positive changes in travel. Travel + catalyst = Travalyst #Travalyst aims to make travel more sustainable, to help protect destinations and benefit communities long into the future, and to enable consumers to make more environmental friendly choices whilst traveling. The Duke of Sussex, having invited the founding partners to start the conversation, believes that the organisations – with operations in nearly every country, hundreds of millions of customers that use their products every day, and business relationships around the world – have sufficient influence and the critical mass necessary to catalyse real system change in the travel industry, for the benefit of destinations, communities and ecosystems. To discover more about the new initiative, visit www.Travalyst.org

Perhaps suffering a touch of altitude hypoxia, Harry claimed to be in the “unique” position of having to protect his family by keeping them off a regular plane when they wanted to have a mini-break at Elton John’s French villa or live it up at Ibiza, Spain.

It implies he thinks he is the only person in the world who worries his flight might go down with his kid (and him) on board.

It implies he doesn’t trust the pilots, engineers, security officers or fellow passengers on commercial planes.

And that while everyone else can risk their safety, he’s so not going to.

While Harry seemed to be vaguely plumping for a healthier planet in Amsterdam, the bottom line is he was schilling in a way most royals don’t.

It’s one thing to have Prince Charles selling organic chutney from the Highgrove farm shop, another to have a senior royal trading on his name for what is yet no clear “deliverables”.

The Travalyst message was to keep booking – surprise! – but “educate” yourself first on visitor saturation in your destination and “sustainable travel”.

In the Q&A session in Amsterdam, Harry – who in the past year has flown to Australia, Fiji, Tonga, New Zealand, Italy, France, Sicily and Spain – asked whether people should be encouraged to fly less.

So … better planes, not fewer trips.

“Somehow we need to connect people to where this money is actually going and the moment you have that connection, feel you have a bigger connection in life and you can actually see the difference that you’re making, then I think that’s acceptable,” Harry said.

So … not sure what that means.

Instead of doing lots of earnest talking and frowning, Harry could let his actions speak loudest.

He and Meghan, 38, could decide their tour of South Africa later this month with son Archie is going to cost the planet more than it gives it.

They could stay home, drop into some community playgroups with their boy, and offset any more accusations of hot air.