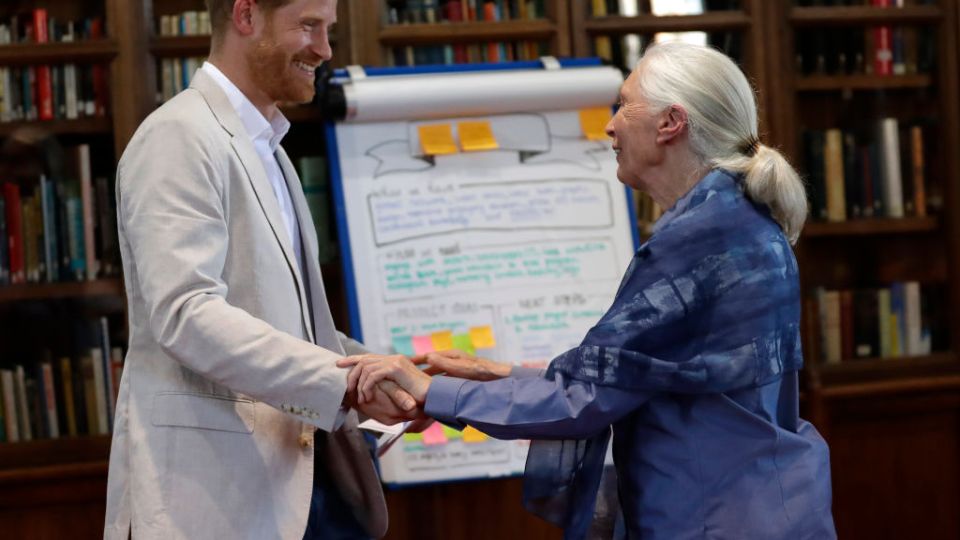 Prince Harry has told environmental activist Dr Jane Goodall he only wanted two children because of his fears for the planet. Photo: Getty

Prince Harry and Meghan Markle will limit their royal brood to only two children over concerns about the future of the planet.

The 34-year-old father revealed the couple’s decision in an interview for the September issue of British Vogue which his wife Meghan, 37, has guest edited.

The prince expressed his concerns about future generations, climate change and described his love of nature in the Q&A section with environmentalist Dr Jane Goodall.

Already a lover of the environment before his son Archie’s birth in May, Harry said his attitude towards the planet had changed further after his first-born son’s arrival.

“I view it differently now, without question,” he told Dr Goodall. “But I’ve always wanted to try and ensure that, even before having a child and hoping to have children.”

As he talked about children, Dr Goodall jumped in, cautioning: “Not too many,” to which Harry responded: “Two, maximum.”

“But I’ve always thought: this place is borrowed,” he continued.

“And, surely, being as intelligent as we all are, or as evolved as we all are supposed to be, we should be able to leave something better behind for the next generation.”

The Sussexes’ conscious family limits are in contrast to Harry’s brother Prince William who already has three children with wife Kate Middleton.

The world currently has a population of 7.7billion people with about 24 people born every five seconds.

On July 29, the planet reportedly reached its annual Earth Overshoot Day when we have used up the resources that natural systems can provide and replace in a year, according to the Global Footprint Network.

Earlier this summer HRH The Duke of Sussex met with world renowned ethologist Dr. Jane Goodall for an intimate conversation on environment, activism, and the world as they see it. This special sit-down was requested by The Duchess of Sussex, who has long admired Dr. Goodall and wanted to feature her in the September issue of @BritishVogue, which HRH has guest edited. HRH and Dr. Goodall spoke candidly about many topics including the effects of unconscious bias, and the need for people to acknowledge that your upbringing and environment can cause you to be prejudiced without realising it. The Duke described that “[when] you start to peel away all the layers, all the taught behaviour, the learned behaviour, the experienced behaviour, you start to peel all that away – and at the end of the day, we’re all humans.” • Through @RootsandShoots the global youth service program @JaneGoodallInst founded in 1991, she has created and encouraged a global youth community to recognise the power of their individual strength – that each day you live, you can make a difference. Photos: ©️SussexRoyal / Chris Allerton #ForcesForChange

The Duke of Sussex also spoke about “unconscious bias”, describing how the way someone was brought up or their environment could shape their outlook, such as racism.

Prince Harry’s expressions about the planet and population come as a report outlines the health impacts of climate change, including children being born less intelligent.

The Global Health Alliance Australia drew on more than 100 pieces of research and policy analysis to show how changes in the environment are affecting various health conditions.

For example children who experienced extreme weather events in the womb  – such as the 2011 Brisbane floods – have on average lower IQs than those who don’t – potentially caused by the mother’s stress hormones.

“It’s been estimated that those kids lost about 14 IQ points because of the stress their mothers went through,” the executive director Misha Coleman said.

The report found allergies and asthma attacks were impacted by increased pollen output from higher temperatures and greenhouse gas concentrations.

Changes in climatic patterns were also leading to lower crop yields, reducing food availability and some people not getting enough nutrients in their diet.

This could contribute to birth defects, brain impairment, stunted growth, anemia and pneumonia, the report suggested.

The alliance has given governments of all levels a nine-point plan to address the issue.

Ms Coleman said there was limited awareness about the broader implications of climate change, including among federal politicians she has spoken to about the organisation’s findings.

Publicly recognising the health impacts of climate change is among nine recommended actions in the report for governments of all levels.

The Global Health Alliance Australia, which represents 47 different organisations, also suggests wording up the health workforce on the threats emerging from climate change.