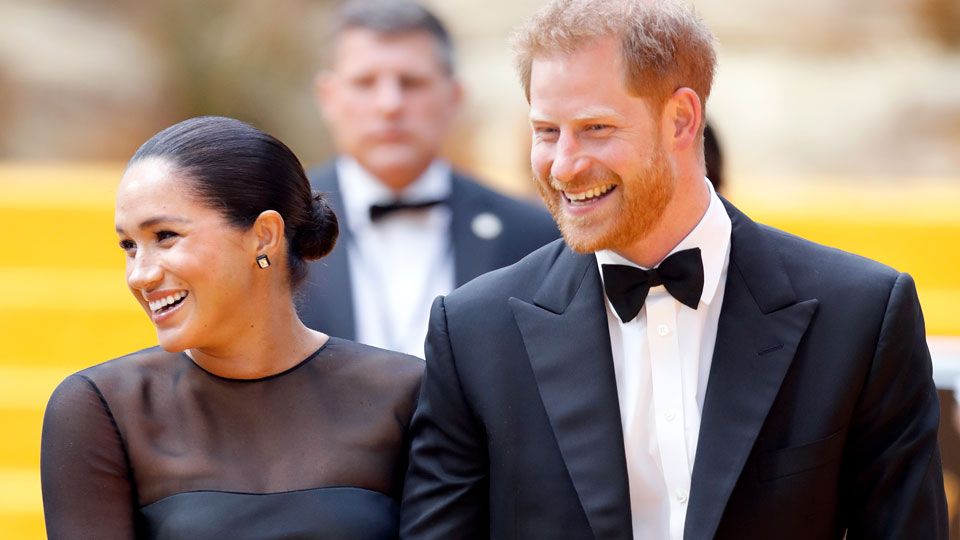 Meghan Markle and Prince Harry at the premiere of The Lion King in London on July 14. Photo: Getty

Stepping off their private plane in Ibiza, Spain, with three-month-old son Archie, Meghan Markle – who was celebrating her birthday – and husband Prince Harry must have been looking forward to some hard-earned downtime.

Imagine the Sussexes’ sunlit discussions on their first family holiday: uplifting debates about baby eco linen, whether you can serve David Attenborough meat at dinner, who tagged the most elephants in Africa in 2017 and who it meant more to.

But no. The real world intruded on their idyll when Harry (or ‘H’ as he styled himself in James Bond fashion in his Insta birthday post to his wife) and Meghan found themselves in the gun for just doing something all super rich and powerful jetsetters do: fly on jets.

For mine, the choice of location was the most intriguing part. Ibiza! Maybe Meghan browsed for handmade sandals then danced to Club Can’t Handle Me with Jade Jagger.

Wishing HRH The Duchess of Sussex a very Happy Birthday 🎂 • ‘Happy Birthday to my amazing wife. Thank you for joining me on this adventure!’ – Love, H Photo©️PA/Doug Peters

Just weeks ago Harry, 34, decreed in Meghan’s British Vogue September issue that for the sake of the planet, they’ll be having two kids, “maximum.”

No mention of what happens if they have twins, but I digress. Because by August 15, as headlines jeered, the Sussexes were instead saving the planet one jet at a time.

Their use of the private plane – reportedly belonging to the same generous unnamed friend who whisked Meghan, 38, to New York for her bougie baby shower – says a lot about the couple.

One, that they really don’t read anything about themselves, or if they do, they don’t give a fig. There’s Botswana jewellery designers to foster. How fast can we get there?

Also, when is the next world day of something so we can get around it?

🐘🐘🐘🐘🐘🐘🐘🐘 Today is #WorldElephantDay and we are pleased to announce that since we followed our friends at @ElephantswithoutBorders (EWB) on Instagram in July, when we were celebrating the environment, you and our friend @TheEllenFund (@TheEllenShow) have spread the word and EWB have been able to help protect 25 elephants by fitting them with satellite navigation collars! These collars allow the team at EWB to track the elephants, as well as to learn their essential migratory patterns to keep their corridors safe and open so future generations of elephants can roam freely. In honour of this amazing support, EWB have named their most recently collared Elephant…ELLEN! We can’t wait to see where she will go! 🐘 Two years ago on World Elephant Day, The Duke and Duchess of Sussex joined Dr Chase to help in this conservation effort. Below, a few words from Mike and his partner Kelly at EWB: • ‘Today is a day to honor and celebrate the majestic elephant and to make a strong stand for conserving and protecting one of the world’s most beloved animals. elephants are intelligent, sentient beings capable of emotions from joy to grief. They are ‘environmental engineers,’ a key-stone umbrella species, and the fight to save them is in effect, a fight to save entire ecosystems and all wildlife. Today elephants are facing many challenges; habitat loss and competition for resources creates conflict with humans, climate change and fires destroy much needed resources and poaching for the demand of ivory makes elephants bigger targets than ever. African elephants are especially prone to human-wildlife conflict because of their large home ranges. Finding, preserving and creating elephant corridors is therefore of great importance in helping to maintain habitats suitable for movement and minimising human-elephant conflict. Corridors are a mitigation technique to better the livelihoods of local communities and the elephants themselves, by providing environment and ample space for wildlife to navigate from one habitat patch to another, without affecting the livelihoods of communities.’ • EWB – Dr Mike Chase, Ms Kelly Landen . 📸 by DOS © SussexRoyal Additional photos: EWB

A government poll of 9000 UK residents was released this week, showing in a year Harry’s popularity has tumbled so far that he’s no longer the most popular royal.

That title goes to a Windsor with plenty of them already, the Queen.

So while the public is revolting, it may not matter to the armour-plated Sussexes, who are busily building their brand based around a mix of earnest humanitarian good deeds and Californian pyscho-babble.

The duke has form with mixed messages: he is a wildlife patron who hunts and last month reportedly spoke on climate change at 2019’s Google Camp after flying to Sicily on another private jet.

In Rome for a polo match in May – don’t stress, commercial flight – he told staff at his hotel not to return his laundered shirts in plastic and not to put plastic lids on his coffee.

Even Princess Diana’s former protection officer Ken Wharfe waded in this time, telling Harry via Vanity Fair he “can’t be preaching about the catastrophic effects of climate change whilst jetting around the world on a private plane.

Well, actually he can. And he’ll probably keep doing it.

Come on, people. Yes, there’s a hilariously terrible disconnect between Harry and Meghan’s work passions and their preferred mode of transport. But there’s also a disconnect if the public really thinks it wants their royals to be more stock standard.

Royals aren’t like everyone else. They’re beyond posh. They do posh things. Or whacky ones, like writing messages on bananas to sex workers.

It’s the actual point of them – to be glittering and bizarre and astonishing. It throws the fact they’re still human into sharp relief.

I for one don’t want them to be like the mum next to me on the tram.

Actually, that’s half true. I wouldn’t mind seeing Kate Middleton wheeling a screaming Louis in a trolley at the supermarket or watching one of them clean a shower or cook a lasagna, purely for the novelty factor.

By and large, the royals’ machine still exists because tourists keep the UK economy afloat by visiting the UK to see castles. The Windsors are like animals in a zoo. Super comfortable but in captivity for the enjoyment of others.

For the younger titled set, that means enjoying the perks of money and fame as much as the next famous commoner multi-millionaire while we watch on.

I say we let them do it. I want my royals with Givenchy gowns more than I want them with woke politics.

Let’s let them soar, if only because it’s part of the extraordinary Sussex soap opera we all love to see unfold. Imagine if we clip their wings and the fun stops.