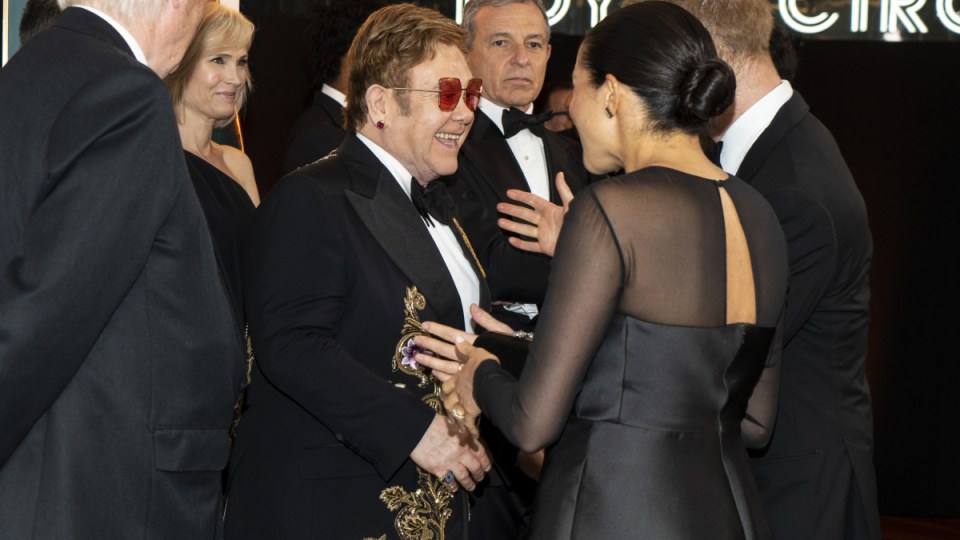 Sir Elton with the Duke and Duchess of Sussex. Photo: Getty

Elton John has publicly defended Meghan Markle and Prince Harry over “malicious” reporting of the eco-friendly royal couple’s use of a private jet for a getaway at his luxury French estate.

Invoking his “dear” friendship with Harry’s late mother Princess Diana, a “deeply distressed” Elton said he felt a “profound sense of obligation” to protect Harry, 34, and his family from “press intrusion.”

To that end, Elton – snapped chatting with Victoria and David Beckham at the Sussexes’ 2018 wedding – was their benefactor for their flights and accommodation for the trip to Nice.

After Elton weighed in, TV host Ellen DeGeneres also stuck up for the “compassionate” duke and duchess on social media.

‘Heir heads’ Harry and Meghan faced renewed heat from commentators and a riled-up public for using the private plane to fly with three-month-old son Archie to Elton’s villa.

It followed criticism of their use of a jet for a getaway this month to the Spanish island of Ibiza to celebrate Meghan’s 38th birthday.

The duke and duchess were labelled hypocrites by the press for not using a commercial airline for the jaunts given their avowed dedication to the environment.

But Elton, 72, was prompted by “distorted and malicious” coverage of the Sussexes’ holidays to say he made sure the flights were carbon-neutral “by making the appropriate contribution” to Carbon Footprint.

That news didn’t appease some social media users. “When will the rich learn you can’t buy your way out of the climate issue?” responded one.

The star and husband David Furnish, 56, wanted Harry and Meghan to have a holiday “inside the safety and tranquility” of the Nice home “after a hectic year continuing their hard work and dedication to charity.”

After a hectic year continuing their hard work and dedication to charity, David and I wanted the young family to have a private holiday inside the safety and tranquility of our home. To maintain a high level of much-needed protection, we provided them with a private jet flight.

Elton said he provided the private jet for security reasons, although Harry and Meghan flew commercial to Australia last October.

Diana’s former bodyguard Ken Wharfe told Vanity Fair last week that British Airways was preferred over private flights for royals because “there’s no guarantee the security is better” on jets.

But Elton maintained the Sussex trio needed “a high level of much-needed protection” and thus he forked out for the flight.

“I highly respect and applaud both Harry and Meghan’s commitment to charity,” he said, calling for the press to cease “relentless and untrue assassinations” aimed at the pair “on an almost daily basis.”

In British Vogue’s September issue guest edited by his wife, Harry said he and Meghan will have two children “maximum” as their way of saving the planet.

After Elton defended them, the Sussexes posted an “inspiring quote for the day” from Desmond Tutu on their Instagram account.

An inspiring quote for the day – wishing you a wonderful week ahead! The Archbishop is an anti-apartheid and human rights activist, who was honoured with the Nobel Peace Prize for his continued efforts to champion equality for all.

DeGeneres went further than a quote.

In a message to her 76 million social media followers, the TV maven, 61, talked about a meeting she and wife Portia De Rossi, 46, had with Meghan and Harry in England to talk wildlife conservation.

Portia and I met Prince Harry and Meghan in England to talk about their work on wildlife conservation. They were the most down-to-earth, compassionate people. Imagine being attacked for everything you do, when all you’re trying to do is make the world better.

“They were the most down-to-earth, compassionate people. Imagine being attacked for everything you do, when all you’re trying to do is make the world better,” DeGeneres wrote.