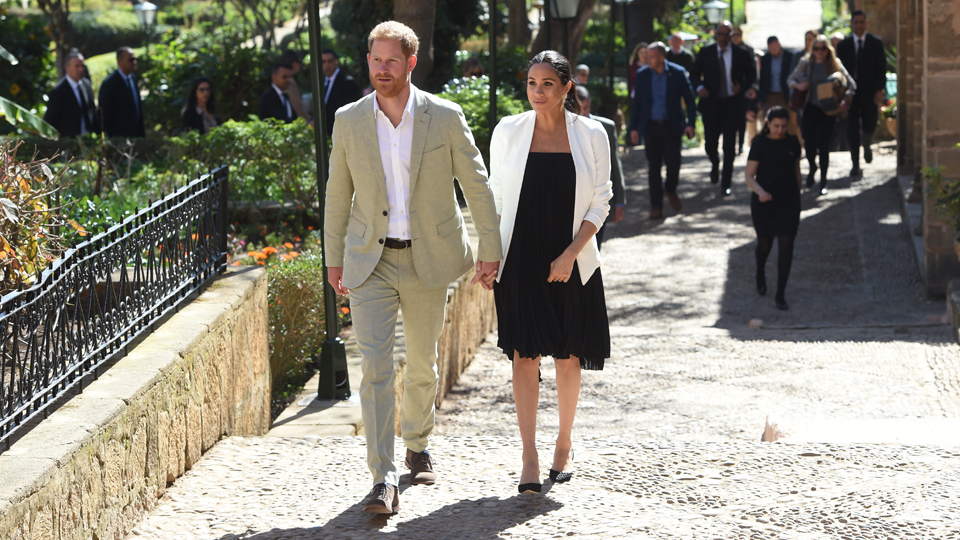 Prince Harry and Meghan Markle in Rabat, Morocco, on their last official tour to Africa in February. Photo: Getty

An “excited” Meghan Markle and Prince Harry will take baby son Archie on a royal tour to South Africa later this year.

The Duke and Duchess of Sussex confirmed to their 8.8 million Sussex Royal Instagram followers on Thursday (UK time) that Archie will travel with his parents for their third working overseas trip.

“This will be their first official tour as a family!” said the post.

The Sussexes said they had been “asked to carry out” the tour “this [northern] autumn”, when Archie will be five months old.

TRH The Duke and Duchess of Sussex are excited to announce that they have been asked to carry out a tour to Southern Africa this autumn. The Foreign and Commonwealth Office have requested a visit to South Africa 🇿🇦 as well as The Duke carrying out visits to Malawi 🇲🇼 and Angola 🇦🇴. His Royal Highness will also do a short working visit to Botswana 🇧🇼 en route to the other countries. The Duke and Duchess are really looking forward to meeting so many of you on the ground and continuing to raise awareness of the high impact work local communities are doing across the Commonwealth and beyond. This will be their first official tour as a family!

The news came days after reports Kate Middleton and Prince William are planning their own royal tour this year, to Asia, in what UK tabloids will be tempted to sell as a rival trip.

At the same time, the alleged ‘differences’ between Kate and Meghan, both 37, were raised again on Thursday by royals biographer Ingrid Seward, editor-in-chief of Majesty magazine.

Ms Seward told The Sun the Queen, 93, “doesn’t have an intimate relationship” with Kate but Meghan “makes her laugh.”

The monarch “admires Kate tremendously but … they don’t have much in common,” Ms Seward claimed.

The Queen and Meghan, however, “have a love of dogs in common.”

The truth of rumours about the duchesses may be put to the test when Wimbledon starts on Monday. Kate is royal patron, and last year took Meghan as her plus one.

Britain’s High Commissioner to South Africa said Meghan and Harry’s “short” trip would only take a few days. While Meghan and Archie will stay in South Africa, Harry will also makes stops in Malawi, Angola and Botswana.

“The Duke and Duchess are really looking forward to meeting so many of you on the ground,” they wrote.

Harry and Meghan – who in April sparked reports they’re planning to move to Africa – share a passion for the continent.

They took a secret holiday to Botswana soon after beginning their romance in mid 2016, and another to celebrate the then-Suits star’s 36th birthday in 2017.

“I managed to persuade her to come and join me in Botswana. We camped out with each other under the stars,” Harry, 34, said in the pair’s BBC engagement interview.

“She came and joined me for five days out there, which was absolutely fantastic. Then we were really by ourselves, which was crucial to me to make sure that we had a chance to know each other.”

In April, Meghan and Harry, who is patron of Rhino Conservation Botswana, shared a photo of the 2017 visit, which showed them helping with elephant conservation efforts.

Harry is seemingly already laying the groundwork for his family trip. Last week he gave his backing to an $85 million land mine clearing initiative in Angola, a cause his late mother Princess Diana championed.

His HIV and AIDS charity Sentebale has expanded from Lesotho and Botswana to Malawi, and Harry may want to see developments in person.

Like that of the Sussexes, the Cambridges’ slated trip will also be a milestone one: their first since the birth of Prince Louis, 1.

The itinerary is not confirmed and it’s also not known if Prince George, 5, Princess Charlotte, 3, and Louis will take part.

Kate and William brought George to Australia and New Zealand in 2014, and their two eldest travelled to Canada with them in 2016.

But with Charlotte joining George at school at Thomas’s Battersea in September, the royal trip may not fit with the Cambridge kids’ schedule.