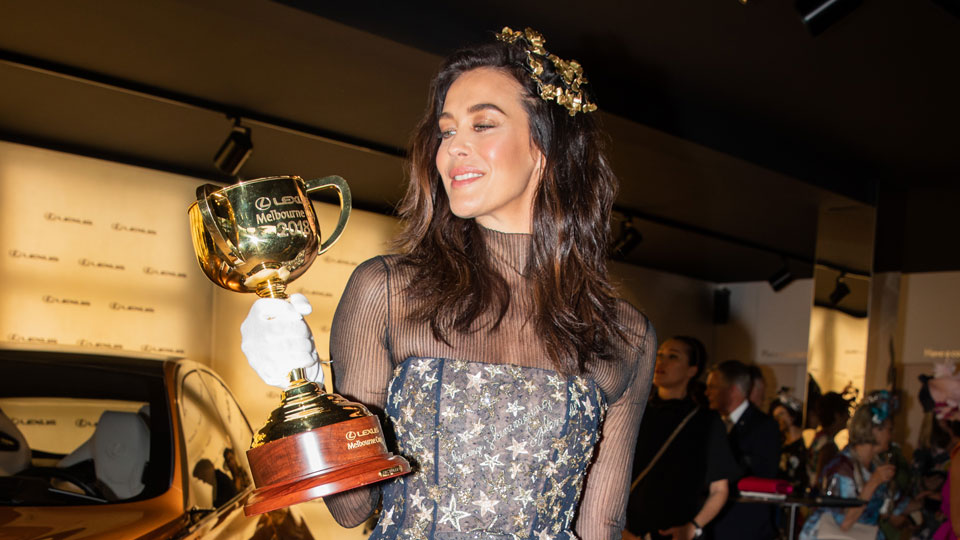 Megan Gale with the Melbourne Cup at the Lexus marquee hours before the 2018 race. Photo: Getty

Megan Gale’s decision to shun the Melbourne Cup has been brushed off by Victorian Premier Daniel Andrews, who says the event is about everyday people and not celebrities.

Model and Lexus ambassador Gale is the latest star to scratch from the November 5 race day.

Until now, the mother-of-two has been a longtime regular at Flemington’s exclusive Birdcage enclosure on Cup and Derby days. Last year she hoisted the actual Melbourne Cup aloft with Kate Waterhouse hours before the race.

Gale’s change of heart comes in the wake of an ABC documentary earlier this month that revealed shocking footage of racehorse cruelty at a slaughterhouse.

“My decision to not attend the races was one I did not make lightly,” Gale said in a statement provided to The New Daily on Thursday.

She said Lexus “has been wonderfully supportive about this” and “I thank them for that and look forward to continuing what is, and will continue to be, a great partnership of mutual respect.”

The luxury car brand is in its second year as Melbourne Cup naming rights sponsor. It “fully respects” Gales’s decision to abandon, according to chief executive Scott Thompson.

He told The New Daily in a statement that Lexus would entertain other “special guests” at the track during the four day carnival.

Pop star Taylor Swift revealed last month she wouldn’t be going ahead with a planned performance, while actress Lana Condor pulled the plug on her attendance last week, Both cited scheduling issues.

Gale’s backflip is the second time this week Flemington’s marquee event has been engulfed in controversy.

On Wednesday Ride Like a Girl director Rachel Griffiths labelled Brae Sokolski, the owner of Derby Day second favourite Thought of That, a ‘top dickhead’ after he replaced Linda Meech with Mark Zahra for Saturday’s race.

Payne was fined for calling Sokolski a “pig” in a now-deleted tweet.

“The Melbourne Cup is not about so-called big celebs visiting us,” the premier said on Thursday.

“It’s about ordinary, hard-working Victorian families who will be there in record numbers and many hundreds of thousands more who will watch the race that stops the nation”.

Mr Andrews is not attending the event himself, but said that has nothing to do with police bracing for more protesters outside Flemington.

Activists from the Coalition for the Protection of Racehorses are planning to make themselves heard outside the gates each day of the Melbourne Cup Carnival, as well as during Monday’s city parade.

The group said it’s been inundated with support since ABC’s 7.30 program broadcast footage last week of racehorses being sent to a slaughterhouse and allegations of animal cruelty at the facility.

Mr Andrews stressed horse welfare is taken “very seriously” in all codes of racing, pointing to Racing Victoria this week announcing a $25 million boost to fund an expanded welfare program.

Victoria Police acting commander Tim Tully said the force is prepared for demonstrations and appealed to protesters to remain peaceful.

“I don’t think there’s any issue out there if people do protest and do it safely without causing any disruption or engaging in any violent activity,” he told 3AW on Thursday.