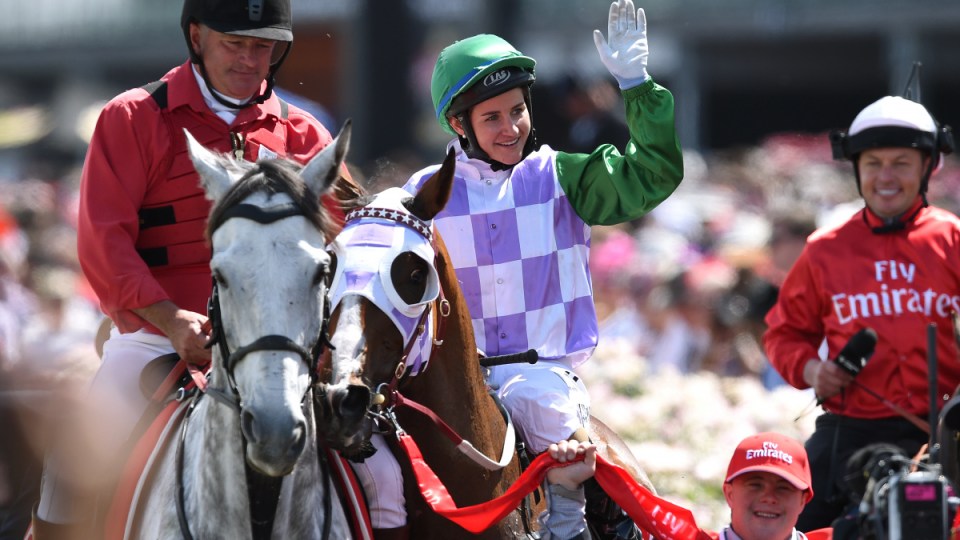 Michelle Payne has been outspoken about women in racing before – most notably immediately after she won the Melbourne Cup in 2015. Photo: AAP

Movie director Rachel Griffiths has labelled the owner of Victoria Derby second favourite Thought of That a “top dickhead” after he decided to sack the winner of the Victorian Jockeys Premiership, Linda Meech, and replace her with Mark Zahra for the big race.

Prominent racing owner Brae Sokolski made the call to change jockeys ahead of the $2 million race on Derby Day.

The decision caused a storm of controversy, with Griffith’s social media post, which has since been edited to remove the phrase “top dickhead”, criticising the decision.

“Men have a better record because women are taken off horses they have qualified for group one races … sooo disappointing to see this behaviour in an industry that needs women in its future.”

The actress and director is not the only one who is unimpressed with Sokolski’s decision. Michelle Payne, the first female jockey to win a Melbourne Cup, called the owner a “pig” on a Twitter post that has now been deleted.

“Not for the public to decide but the public can recognise you as a pig,” Payne tweeted.

Griffiths directed Ride Like A Girl, the film documenting Payne’s 2015 Cup win on Prince of Penzance. Payne famously spoke out after her victory, describing racing as a “chauvinistic sport”.

“I just wanted to say that everyone else get stuffed, because they think women aren’t strong enough but we just beat the world,” she said at the time.

While Payne got away with her post-Melbourne Cup comments, this time Racing Victoria stewards were not impressed by her post, which came after Sokolski declared that while he knew his decision would be “unpopular”, “it’s not a decision for the public”.

Stewards interviewed her on Wednesday morning and Payne pleaded guilty the breaching Australian Rule of Racing 228 (d), which bars people in the racing industry from publishing or posting material or comment that is “obscene, offensive, defamatory, racist, threatening, harassing, discriminatory or abusive to or about any other person involved in the racing industry”.

The stewards found the comments about Sokolski offensive and fined Payne $1000.

Sokolski put out a statement rejecting any inference he had dropped Meech because she was a female jockey.

“I’ve spent my life building a reputation in the business and racing communities for acting with integrity, decency, fairness and respect,” he said.

“To have this reputation now sullied by an impetuous and reckless act is deeply upsetting, not just for myself, but for those close to me.

“Michelle Payne will be held to account and a lesson needs to be learned. And as to those who have followed her with their vitriol, unfortunately it’s a reflection on society.

“It’s regrettable and certainly I would like to move on.”

Owners opt for group one Zahra

Sokolski said Zahra would ride the three-year-old colt instead due to his “superior record”.

The decision by Brae and Thought of That’s connections came despite Meech riding the colt to victory three times, including in its most recent start and win by three and three-quarter lengths in the group three Caulfield Classic a fortnight ago.

Meech’s ride in that race was widely praised, as she took Thought of That straight to the front and dictated the tempo of the race to stack up the field, before kicking away at the 300-metre mark to win easily.

The New Zealand-born Meech, a long-time trackwork rider for former trainer Peter Moody, had been around the industry for many years without making the headlines.

In recent times, however, her profile has increased.

In August, Meech became the first female rider to win the Victorian Jockeys Premiership after she notched up 139 wins last season.

She managed that incredible feat despite missing two months due to a collarbone injury.

Overall in the new season so far, Meech also has a better record than Zahra.

On Victorian metro tracks – including Flemington – Zahra has a 12 per cent winning strike rate and 33 per cent place strike rate (finishing in the first three).

In comparison, Meech has a 14 per cent winning rate and a 28 per cent place strike rate.

However, in group one races, Zahra has more experience and a better record.

His only ride on Thought of That came in the horse’s debut in April, when he finished sixth of nine runners at Sandown.

‘I hope it gets beat’: Meech responds

Meech rode Thought of That in trackwork on Tuesday morning before being told by the horse’s trainers Ciaron Maher and David Eustace that she would not get the ride on Saturday.

The jockey is notoriously media shy, preferring to stay out of the limelight, but she made her feelings plain when speaking to Racing.com.

“I’ve had 20 years in the racing game, and Brae probably hasn’t been there quite as long but I won’t let it get to me,” she said.

“It’s a little bit disappointing. I know he [Sokolski] wanted a group one jockey but Mark Zahra’s had 262 rides in group ones and I’ve had 23 for one winner compared to his 15.

“I think if you’re any good at maths you’ll work out that he’s probably had a lot more opportunities, but his [winning] strike rate is pretty bad, like mine!

“Brae’s a smart enough bloke to stick with the big guns, but I hope it [Thought of That] gets beat.”