It was just a small sign that Australia is moving towards a new normal.

On Wednesday, Bunnings announced the beloved sausage sizzles will soon be back on the weekend menu in the ACT and New South Wales.

Chief operating officer Deb Poole announced the good news on 2GB on Thursday, joking it was ‘‘the biggest crisis out’’.

“We are really, really excited to announce that our Bunnings sausage sizzle is back in NSW and the ACT from this weekend,” she said.

In a post-pandemic world, the return of the humble sausage sizzle is not an insignificant event.

But it’s not just the snag.

Slowly around the country, even in locked-down Melbourne, there are small signs we are crawling into ‘new normal’ territory.

Yes, even in Melbourne

Victorians might be a long way off group hugs, but there is finally light at the end of the long lockdown tunnel.

They can now sit outside for two hours – right in time for swooping season.

If restrictions last until October 26, Melbourne will have been in lockdown for 188 days, making it one of the longest (and strictest) in the world.

Although the city might be sick of hearing ‘not long to go now’ from their interstate mates, things are looking up.

In less than three weeks, they’ll be able to enjoy freedoms they haven’t experienced in months.

Dining out will be back, they can socialise with 10 people outside, and they’ll be able to travel more than five kilometres from their homes.

“Getting a job,” added another.

In comparison to Victoria, the rest of the country has been slowly opening up the past few months with growing signs we are entering ‘the new normal’.

New Year’s Eve was at risk of looking very different, and much darker, this year.

But the NSW government announced that Sydney’s Harbour Bridge fireworks will go ahead, even if they’re a little stripped back.

NSW Premier Gladys Berejiklian said the state government had taken the reins for organising the event, which is usually held by Sydney Council and would help foot the bill for the fireworks.

She said the fireworks were a symbol of hope and “important for our soul and for positive thinking about next year” while warning they would be “toned down”.

“Our strong intent is that there be some sort of fireworks display that evening,” Ms Berejiklian said.

“But the vast majority of us will be watching it from home on the television.”

Live performances will return to NSW from Thursday, with theatres to sell tickets for 50 per cent capacity of venues up to 1000 people.

Corporate events will be able to have 300 people as long as they are seated.

But that’s not all.

Other restrictions, including dancing at weddings, are lifted and more than one parent will be allowed to watch their children’s weekend sports.

There is some forking good news for Queenslanders, with many restaurants using normal cutlery again rather than single-use utensils.

Other restrictions were lifted over the weekend, with a maximum of 30 people now allowed at one house and visitors permitted in hospitals and nursing homes.

The state also eased some of its strict border measures, with ACT residents now allowed to enter the Sunshine State without quarantining, provided they haven’t been in a COVID-19 hotspot in the previous two weeks.

Residents from Byron Bay, Lismore, Richmond Valley, Glen Innes and Ballina will be allowed to enter Queensland from Thursday morning.

Standing and drinking in SA

And there could be good news for South Australians who like to stand at the pub.

The state’s transition committee is due to meet on Thursday to decide if South Australians will be allowed to stand up and have a drink – something the hospitality industry is pushing for. 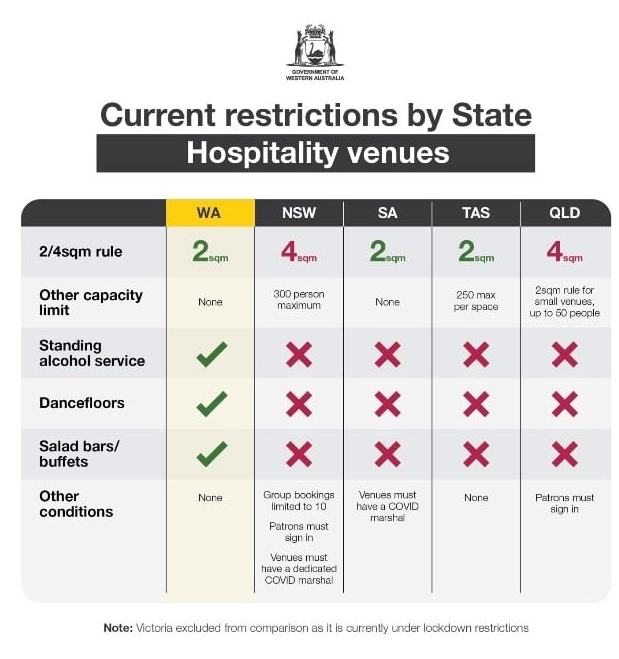 No quarantine in WA

On Wednesday the Western Australian government announced an easing of its border restrictions for people travelling from Victoria and NSW.

From next week Victorians travelling to WA will no longer have to go through hotel quarantine.

“From Monday, October 5, people who have travelled from Victoria will no longer need to quarantine in a hotel facility as long as they have an appropriate premise to quarantine in safely,” Premier Mark McGowan said.

Travellers from NSW will be subject to the same condition of entry that non-Victorians are.

“This is a positive step forward for our nation,” Mr McGowan said.

The small signs that Australia is slowly tiptoeing back to normal