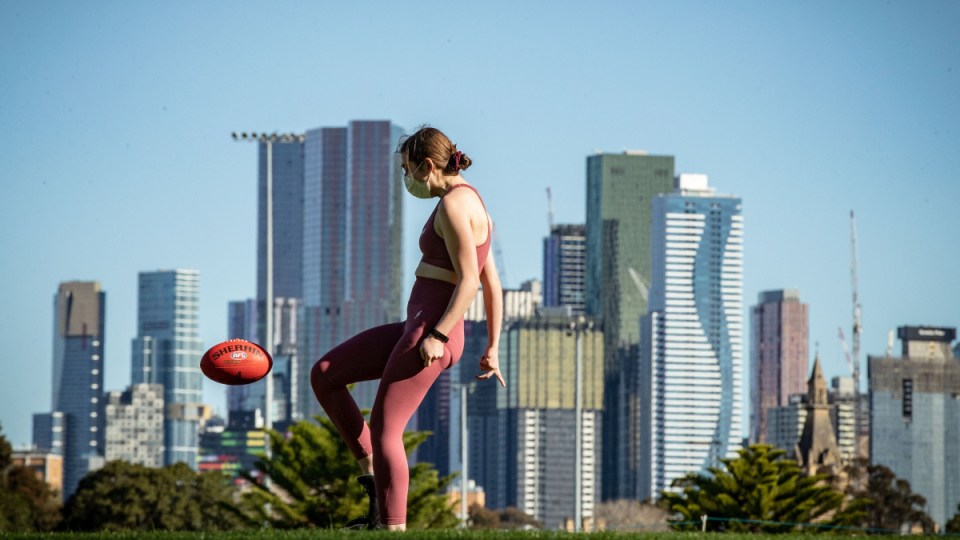 Virus restrictions have lifted slightly for Melburnians – with the promise of more to come on October 19. Photo: Getty

It is the first time since June 16 that the state has had a day with fewer than 10 new infections and comes after nearly a week of daily totals in the low double digits.

Sadly, Victoria’s toll from the pandemic has crept closer to 800, with three more deaths confirmed on Monday. They took the Victorian toll to 787 and the national toll to 875.

Melbourne’s key 14-day average of new infections is down to 20.3, while it remains at 0.6 for the rest of the state.

Premier Daniel Andrews said Monday’s case numbers came from 6807 tests. He said that was a “robust” number, despite being well short of peaks of about 20,000.

“It is not case numbers that will hold us back from taking safe and steady steps toward the COVID-normal to continue opening up,” he said.

“What could be a challenge for us is if we don’t see people coming forward and getting tested and if we start to have doubts about whether we’ve got the most complete picture.”

The three-month low in the daily tally came as Melburnians woke to their first day in eight weeks without a curfew.

The city’s controversial curfew, imposed to bring Victoria’s devastating second wave under control, was repealed from 5am on Monday under widespread rule relaxations unveiled on Sunday.

Mr Andrews said lifting the curfew did not mean people could hold private indoor or outdoor gatherings, with those caught doing so liable for a beefed-up $5000 fine.

“No one has the right to put everything that Victorians have done at risk by going and potentially spreading the virus, one family to another,” he said on Sunday.

A trial contesting the curfew’s legality under the state’s human rights charter – lodged by aspiring Liberal candidate Michelle Loielo – was scheduled to begin in the Supreme Court on Monday.

The Premier denied the move to repeal it was motivated by the legal action.

In other changes, 127,000 Victorians are able to return to work from Monday – close to 30,000 more than originally expected – as industries such as construction, warehousing and abattoirs increase their capacity.

Other rule changes include childcare reopening, allowances for outdoor gatherings of up to five from two households and the lifting of a shopping limit of one person per household a day.

He urged Victorians not to let their guard down, saying the virus would run wild if people pretend the second wave is over.

Prime Minister Scott Morrison, as well as Victorian senior federal ministers Josh Frydenberg and Greg Hunt, welcomed Sunday’s announcement of easing rules, but called for the timetable to be accelerated.

“We note that at similar case levels NSW was fundamentally open while remaining COVID-safe due to a world-class contact tracing facility,” the federal trio said.

“As many epidemiologists have encouraged, we would support Victoria in reviewing the trigger of five and zero cases with regards to the third and last steps.”

There were 399 active cases in Victoria on Sunday, the first time that number has been under 400 since June 30.