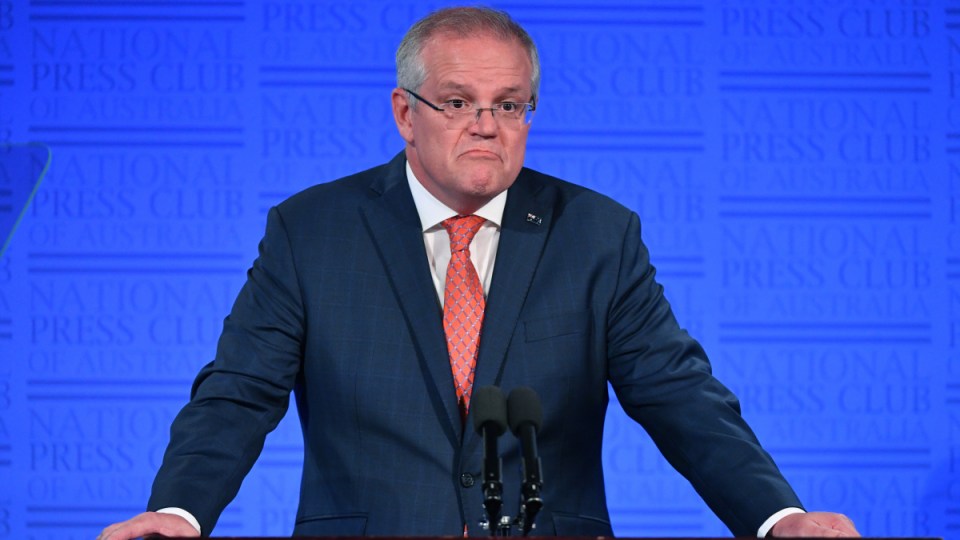 Scott Morrison has denied the controversial $100 million sports grant scheme was used for political benefit, despite the damning Auditor-General’s report into the scandal-plagued program.

The Prime Minister faced a grilling about the scheme at a National Press Club address in Canberra on Wednesday.

He insisted his government’s handling of the grants broke no rules – but admitted guidelines were another matter. And he left the door open to expanding the controversial scheme to clubs that missed out.

The scathing auditor-general’s report into the scheme, administered by then sports minister Bridget McKenzie, found clubs in marginal and targeted seats were favoured ahead of the 2019 federal election.

Senator McKenzie is under pressure to resign over her handling of the grants. The head of the Prime Minister’s department is investigating if ministerial rules were broken.

On Wednesday – under sustained questioning from journalists at the Press Club gathering – Mr Morrison would not rule out funding rejected projects. Many of those knocked back for grants in 2019 were assessed as ranking well above Sport Australia’s threshold.

“I will work with the Treasurer to see how we can better support even more projects in the future,” he said.

“As the Auditor-General found, the rules were followed. Guidelines are separate issues.”

The PM was asked if it was wrong to use public money for political benefit.

Club representatives who spent hundreds of hours preparing applications only to miss out have told the ABC that the process was “gut-wrenching” and hit out at “underhanded” tactics.

Kyneton District Soccer Club, in central Victoria, was one of those that missed out.

Its president Ron Cole said it was “disgusting” to learn Senator McKenzie rejected his club’s $460,000 grant request despite Sport Australia giving it a rating of 87 out of 100.

“It’s disheartening to see that it has become basically a political game rather than clubs being awarded the funding on their merit,” he told the ABC.

This is why the Kyneton Soccer Club President is so upset. Ron Cole said the ground is so bad home games can’t be played in winter. He found out today they were worthy of a Fed gov sports grant. “Absolutely gut-wrenching”, he said. #sportsrorts #mckenzie #auspol pic.twitter.com/8raj2pNEha

Senator McKenzie, the Nationals’ deputy leader, has refused to resign but party room colleagues and the PM aren’t guaranteeing her future.

“Every day that Bridget McKenzie stays as a cabinet minister, it undermines faith in our democracy,” he said.

“Anyone who looks at this knows that this is just a complete rort.”

Deputy Labor leader Richard Marles said leaving the door open to funding more clubs was an attempt by the Prime Minister to avoid responsibility for the issue.

Nationals frontbencher Darren Chester – a potential cabinet replacement for Senator McKenzie if she is axed – refused to publicly defend his fellow Victorian.

A roller derby club in Mr Chester’s Gippsland electorate was one of those knocked back for a grant, despite being ranked 98 out of 100 on the scale of most worthy recipients.

“The greatest deficit we face right now in Australian politics has nothing to do with the budget, it’s a deficit in the trust between us and the public we represent,” he told ABC radio.

Nationals leader Michael McCormack is waiting for the outcome of Department of Prime Minister and Cabinet secretary Philip Gaetjens’ investigation.

Sport Australia warned Senator McKenzie’s office about politicising the grants scheme in March last year, just ahead of the May election.

Mr Gaetjens is also scrutinising a $36,000 grant Senator McKenzie awarded to a Victorian shooting club to which she belonged.