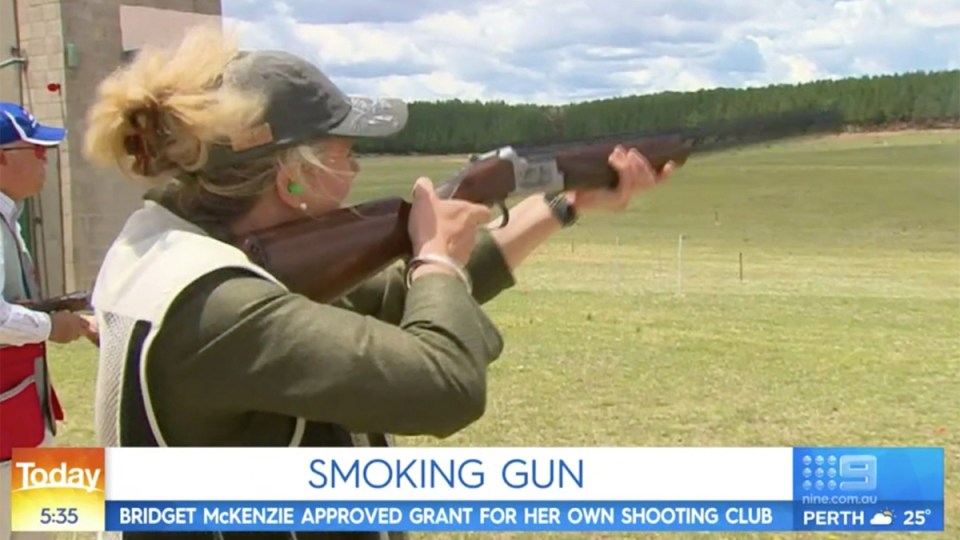 Gun-toting Bridget McKenzie slugged taxpayers over $40,000 for a VIP flight from Adelaide to Western Australia for a Nationals conference and a shooters’ expo, where she declared shooters didn’t want “special deals” but were sick of being treated like “pariahs and terrorists”.

The embattled Agriculture Minister, who faces calls to resign over the sports rorts affair – including her own links to shooting clubs – chose to charter a private jet at taxpayers’ expense despite the fact Finance Minister Mathias Cormann flew from Adelaide to Perth on a domestic flight during the same period.

The total costs were extraordinary, running to $40,230, including flying the RAAF plane empty from Canberra to Adelaide and from Perth back to Canberra.

The Adelaide-Busselton leg alone cost more than $14,000 – or more than a single person receives on Newstart to live for a year.

Senator McKenzie travelled to Busselton in October 2018 for the Nationals’ state conference, where she promptly attacked the Labor government for the state of the terminal.

“It is very disappointing that the state government has not seen to maintain its commitment to this community and the broader region to actually finish the terminal,” she said.

There was also a $7500 ‘ghost flight’ to get the plane in position in Adelaide for Senator McKenzie.

Bizarrely, under the rules, Senator McKenzie flew domestic back to Canberra at a cost of $1800 while the RAAF plane returned empty, at a cost of $15,000. That took the total costs of the weekend trip, including travel allowance, to about $43,000.

The minimum annual wage in Australia is $38,521 – less than Senator McKenzie’s taxpayer expenditure on a single weekend.

The flights follow a storm of controversy over the decision by former speaker Bronwyn Bishop to charter a helicopter to fly from Melbourne to Geelong in November 2014.

But the cost of the unscheduled VIP flight in October 2018 does not appear on Senator McKenzie’s travel declaration for the period, which revealed she was again one of the biggest spenders, running up a $30,000 travel bill over the three-month period.

Senator McKenzie is not required to declare the VIP flights in her travel expenditure to the Independent Parliamentary Expenses Authority, but the cost is tabled to Parliament separately as a special purpose flight organised by the Defence Department.

Senator McKenzie spent about $25,000 on domestic flights from October 2018-January 2019, and claimed a similar amount in travel allowance.

At the Sporting Shooters Association of Australia WA’s Perth Shot Expo, she launched a controversial study on the health benefits of shooting and gun clubs.

“We don’t want special deals. We just don’t want to be treated like pariahs, terrorists, you know, problem children,” the Senator said.

“We are loud and proud and we are in every single country town and capital city.”

Senator McKenzie remains under fire for approving thousands of dollars in grants for gun clubs, including one that she was a member of at the time.

A spokeswoman confirmed Senator McKenzie travelled from Adelaide to Perth on a charter jet but could not immediately explain why this was not included in her travel declaration.

It’s possible another MP booked the flight and she joined the plane, but Senator Cormann’s record for the same period revealed he flew Qantas.

“The minister travelled from Adelaide to Perth via Busselton and Manjimup on a special purpose aircraft,” she said.

Busselton and Manjimup are about two and three hours from Perth, respectively.

“She had a number of ministerial meetings and announced the 600th regional mobile base station before reaching Perth,” the spokeswoman said.

“The next day she attended the Shot Expo, a shooting stakeholder event, to announce a nationwide study into the benefits of hunting and shooting.

“She returned to Canberra by a commercial flight.”

Senator McKenzie’s Independent Parliamentary Expenses Authority filings list her flight from Perth to Canberra as costing $1800, but the VIP flight would be far more expensive.

She also claimed travel allowance of about $400 each night in Adelaide and Perth.

But her travel records did not reveal how she got from Adelaide to Perth – until now.

Senator McKenzie faced further criticism on Tuesday after leaked documents revealed worthy sports clubs missed out on funding under the program she administered, allegedly because the Liberal Party was targeting marginal seats.

A probe into whether Senator McKenzie has breached ministerial standards is expected to be finalised this week.