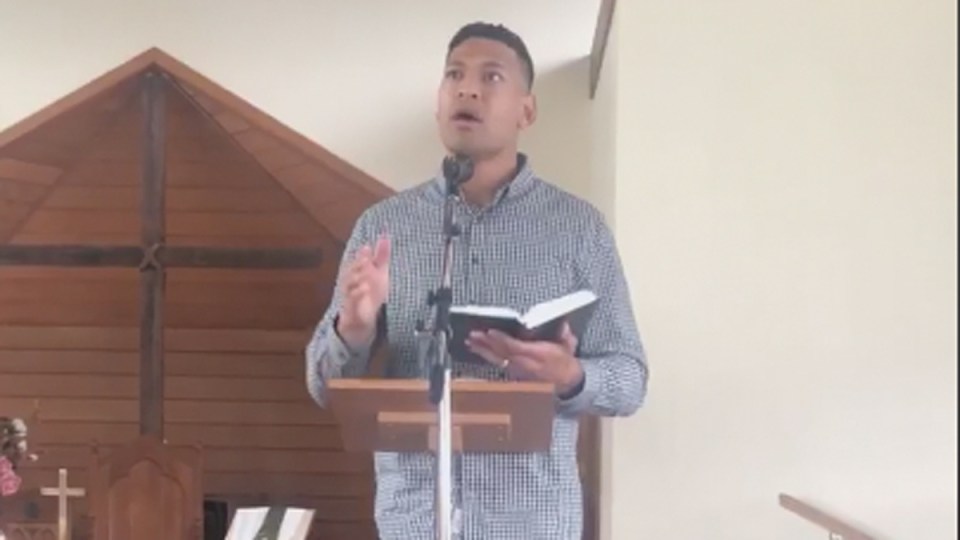 Israel Folau has linked the bushfires to God's judgment in a recent sermon Photo: Facebook/Truth of Jesus Christ Church Sydney

Folau made the claims to followers at his fringe-Christian church, in a sermon also aired online

His claims were made “out of love”, he said.

Folau said he wanted Australians to acknowledge the word of God and “hopefully receive it with open hearts”.

“I’ve been looking around at the events that’s been happening in Australia, this past couple of weeks, with all the natural disasters, the bushfires and the droughts,” he says in the clip on the The Truth of Jesus Christ Church Sydney Facebook page.

“Look how rapid these bushfires these droughts all these things have come in a short period of time. Do you think it’s a coincidence or not?”

“God is speaking to you guys. Australia, you need to repent and take these laws and turn it back to what is right.”

He added the tragic events were just a “taste” of God’s judgment.

It seems being dumped by Rugby Australia in May after claiming that homosexuals and other sinners will go to hell has not extinguished the 30-year-old’s faith in his right to air homophobic views.

But the weekend sermon went too far for even staunch Folau ally Alan Jones, who used his 2GB radio show on Monday morning to tell the former rugby union star to “button up”.

Jones has long been a supporter of Folau, arguing for his right to religious freedom.

But, with four people are dead and hundreds of homes lost to the ongoing fire crisis, Jones urged Folau to keep quiet.

“Israel is a lovely human being, I know him well. Israel, button up. Button up,” he said.

The Prime Minister is a practising Christian but stressed Folau’s comments were not representative of his community.

“The thoughts and prayers, let me stress, from Christians, are very much with those who are suffering under the terrible burden of fire,” Mr Morrison told reporters in Adelaide on Monday.

“I thought these were appallingly insensitive comments.

“If people don’t have something sensible and helpful to say, can you just keep it to yourself.”

It isn’t the first time Folau has courted controversy with his sermons. In June he attacked gay and transgender children, months after his $4 million contract was terminated by Rugby Australia.

He also told the national conference of the Australian Christian Lobby in October that he knew telling homosexuals they were destined for hell would be “offensive” but would “absolutely” repeat it.

So @ScottMorrisonMP won’t legislate to address climate change or acknowledge its link to natural disasters.

But he will to bring in the 'Religious Freedom' bill to protect ugly discrimination from Israel Folau.#auspol pic.twitter.com/pBqdNvLwdI

He is pursuing a $10 million unfair dismissal claim against Rugby Australia at Fair Work Australia, citing an “unreasonable restraint of trade”.

If the matter is not resolved at mediation in December, it will proceed to trial in February.

Where does one even begin?
And at what point are we free to say the truth: Folau is in the grip of a tragic delusion, and may well need help? https://t.co/JNHRxsNrIB

Are the result of Australian abortion and gay rights laws.

#NSWRFS Building Impact Assessment teams are continuing their inspection of fire affected communities. In the past fortnight, 421 homes have been destroyed. Around 2000 homes have been spared. Already this fire season, six lives have been lost and 530 homes destroyed.#nswfires pic.twitter.com/c4Hlon64DZ

During the 12-and-a-half-minute sermon Folau reads from Isaiah’s Bible verse titled The Lord’s devastation of the Earth: “The earth is defiled by its people; they have disobeyed the laws, violated the statutes and broken the everlasting covenant. Therefore a curse consumes the earth; its people must bear their guilt. Therefore earth’s inhabitants are burned up, and very few are left.”

He goes on to link the passage to the bushfire disaster and the legalising of same-sex marriage and abortion.

“The events that have happened here in Australia, in the last couple of years – God’s word says for a man and a woman to be together … they’ve come and changed this law,” he said.

Folau said the scripture was talking to Australia.

He said the fires and drought were only a “little taste of God’s judgment” with worse to come if nothing changes.