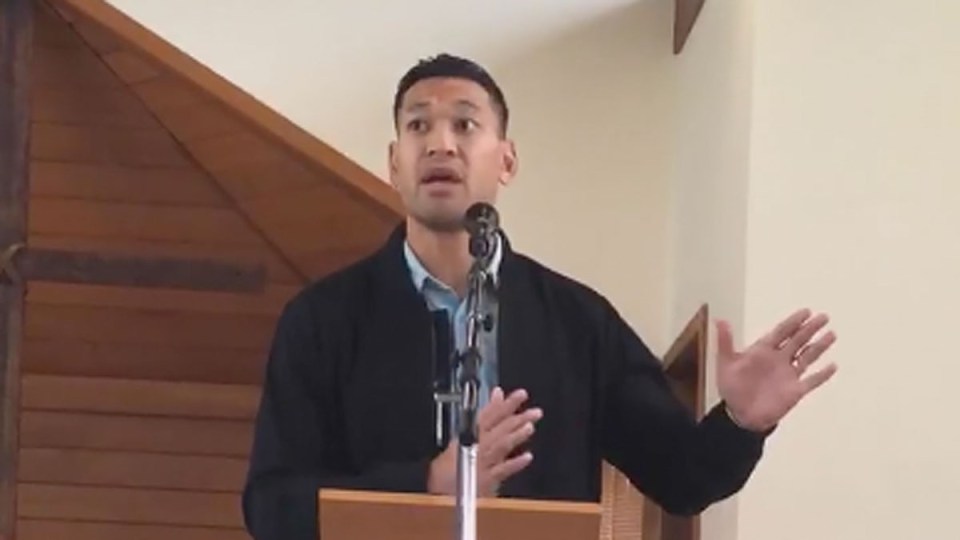 The sacked rugby player has a new home for his divisive fundraising page. Photo: Facebook

Former Australian rugby international Israel Folau has launched another attack on gay people, while also criticising the ability of young people change gender, during a sermon at his Sydney church.

Folau described homosexuality as a sin and claimed the devil was behind primary school children being allowed to decide if they wanted to change gender.

“This is what the devil is trying to do, to instil into the government, into this world, into society, and it is slowly happening,” he said in sermon at The Truth of Jesus Christ Church in Kenthurst on Sunday.

“The sad thing is why a lot of people out there that are non-Christians say bad things about the church, is because a lot of the churches allow those things to happen,” Folau added.

“They say that a man and a man should be able to be married and there is nothing wrong with it. This buys into the theme of pleasing man rather than pleasing God and standing up for the truth.”

The 30-year-old’s rant was posted on the church’s Facebook page.
Folau also criticised modern “westernised” churches and said true believers in Christ “profess him wherever we go”.

“Are we too scared because we might be cast out by our workplace or cast out of somewhere because we’re not liked or loved by those around us and don’t believe the same thing we do?” he asked.

“You might be the only born-again Christian in that workplace, you might feel a bit awkward with your co-workers because they are in the world and you’re not. We should feel blessed … because God has called us.”

The former Wallaby’s $5 million Rugby Australia contract was torn up last month after he refused to take down an Instagram post which quoted bible scripture and said “hell awaits” homosexuals and other sinners.

Folau has launched legal proceedings with the Fair Work Commission against Rugby Australia and is seeking up to $10 million in damages.

On June 9, Folau questioned Rugby Australia’s integrity and demanded to know how and why confidential details of his code of conduct hearing were leaked.

He reportedly sent an email to all 10 RA directors seeking an explanation as to how details of his sworn testimony were published by News Corp.

“This is blatantly unfair. As you know, the tribunal hearing must be closed and private, and Rugby Australia was obliged to keep all information confidential,” Folau wrote to RA chief executive Raelene Castle, chairman Cameron Clyne and eight others.

He also took exception with the way he thought he has been portrayed in the media, accusing the governing body of providing unfair and misleading information.