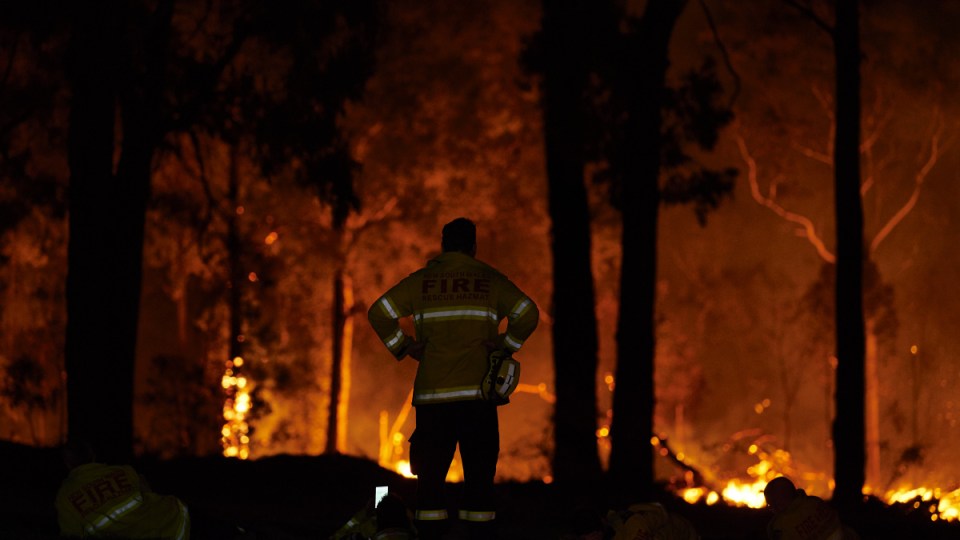 Fire crews are able to take a moments rest as conditions continue to worsen. Photo: Getty

An “unpredictable” bushfire is fast closing in on Queensland’s Scenic Rim, with residents forced to flee the approaching flames.

Meanwhile, NSW firefighters are bracing for another week of severe fire conditions as temperatures into the 40s combined with strong, dry winds would likely prompt widespread severe danger across the state.

To date, close to 500 homes have been destroyed across NSW and six Australians have died since the start of the bushfire season.

There was no ease for residents in the small Queensland town of Tarome where a “large, unpredictable” fire travelling eastward could have a significant impact on the community, authorities warned.

“Conditions are getting worse,” the Queensland Fire and Emergency Services (QFES) said.

People living close to or on Ryan Road, Hinrichsen Road, Simmonds Road, Campsite Road and McGuire Road were at risk and were advised to leave and seek shelter at the Kalbar School of Arts Hall in Kalbar.

Firefighters are hoping cooler conditions may give them a break on Monday as they battle more than 90 bushfires across the state, but severe weather appears set to return midweek.

The most challenging blazes are at Ravensbourne and Esk, near Toowoomba, and the fire at Tarome, where residents were told to evacuate.

Campers were also evacuated late on Sunday from the path of a dangerous fire on Moreton Island, off Brisbane, ahead of an expected wind change.

Weakening winds on Monday should see fire conditions ease from severe to very high, the Bureau of Meteorology says.

Temperatures will also fall, however, the fire danger looks set to remain at very high for most of the week.

It could become severe on the Darling Downs on Wednesday, with Toowoomba forecast to reach 35C.

On Moreton Island, a wind change overnight could challenge firefighters as it shifts from north to south.

“But moving into tomorrow we should see the wind on a decreasing trend throughout the day,” Ms Gardner said.

Severe fire conditions ahead for NSW

More than 1500 firefighters were battling blazes from the outskirts of Sydney right up to the Queensland border on Sunday.

“(They’re) doing their best to try and secure as much as they can ahead of those worsening conditions,” Mr Fitzsimmons said.

On Sunday evening, five fires in NSW were classed as “watch and act” with 35 of 62 fires burning yet to be contained.

The forecast for the week ahead follows revelations the devastation on the NSW mid north coast has been worse than expected, says Emergency Services Minister David Elliott.

“It’s quite clear from the field of operations that we’ve inspected today that the devastation is probably beyond what anybody expected,” Mr Elliott told reporters on a visit to affected areas around Kempsey and Port Macquarie on Sunday.

Fire danger ratings on Monday will be high in the Greater Sydney Region as well as the Illawarra and Greater Hunter, northern slopes, north western, central ranges, southern ranges and New England regions.

Meanwhile a bushfire that threatened parts of Cascade in southern Western Australia’s Shire of Esperance is now under control.

A “watch and act” alert issued for the area on Sunday afternoon has been downgraded.

Emergency services report conditions have eased and there is no threat to lives or homes.

Although no immediate danger exists, Emergency WA has not yet fully contained the fire and is asking residents to be aware and up to date in case the situation changes.

The blaze started near the intersection of River Road and Cascade Road in Cascade and was advancing quickly north-northeast.
There have been 600 hectares burnt so far and the cause of the fire is unknown.