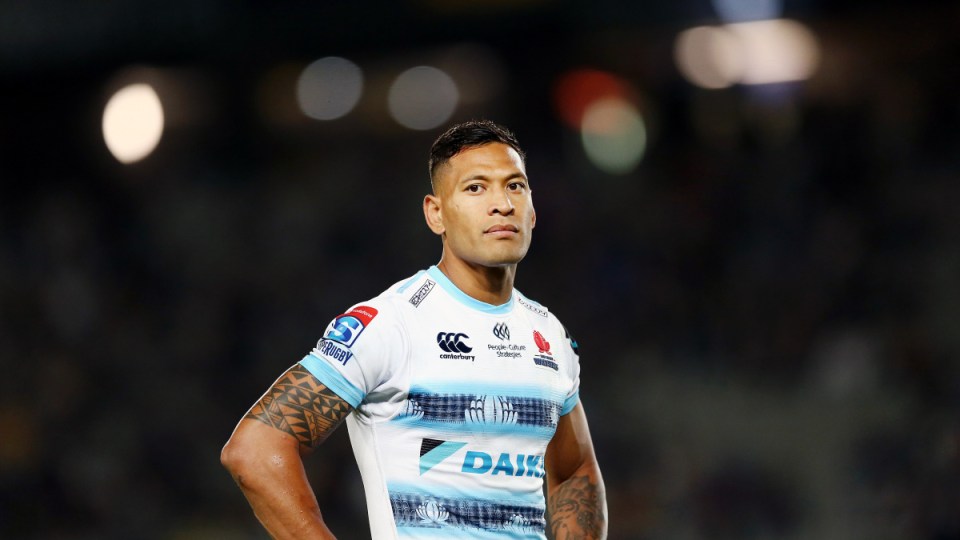 Folau has 72 hours to appeal and force a second code of conduct hearing. Photo: Getty

Israel Folau says he is weighing up his options after having his multi-million-dollar Rugby Australia contract terminated for his divisive social media posts.

Folau has 72 hours to appeal.

Folau issued a statement asserting his constitutional right to freedom of religion had been trampled and he was “considering my options”.

At a press conference in Sydney, RA CEO Raelene Castle said it was a painful situation for the game.

“We are here to announce that Wallabies and Waratahs player Israel Folau has today been issued a sanction directing termination of his playing contract for his breach of the professional players code of
conduct,” she said.

“While Rugby Australia accepts the panel’s decision to terminate his player contract for his breach of the code of conduct, we want to stress that this outcome is a painful situation for the game.

“Rugby Australia did not choose to be in the situation, but Rugby Australia’s position remains that Israel, through his actions, left us with no choice but to pursue the course of action resulting in today’s outcome.

“This has been an extremely challenging period for rugby,” she said.

On May 4, Folau went head-to-head in a two-day code of conduct hearing at Rugby Australia headquarters in Sydney after he posted on Instagram saying hell awaited “drunks, homosexuals, adulterers” and others.

Those that are living in Sin will end up in Hell unless you repent. Jesus Christ loves you and is giving you time to turn away from your sin and come to him. _______________ Now the works of the flesh are manifest, which are these , adultery, fornication, uncleanness, lasciviousness, idolatry, witchcraft, hatred, variance, emulations, wrath, strife, seditions, heresies, envyings, murders, drunkenness, revelings, and such like: of the which I tell you before, as I have also told you in time past, that they which do such things shall not inherit the kingdom of God.
Galatians 5:19‭-‬21 KJV _______________ Then Peter said unto them, Repent, and be baptized every one of you in the name of Jesus Christ for the remission of sins, and ye shall receive the gift of the Holy Ghost.
Acts 2:38 KJV _______________ And the times of this ignorance God winked at; but now commandeth all men every where to repent:
Acts 17:30 KJV _______________

The dual international was being represented by high-profile solicitor Ramy Quatami and barrister Adam Casselden, who recently worked on the coronial inquest into the murder-suicide of Sydney family Maria Lutz and her children Ellie and Martin at the hands of their father Fernando Manrique in 2016.

Folau was fighting to save his career after Ms Castle issued the three-times John Eales Medallist with a “high-level” breach notice last month and threatened to tear up his four-year, $4 million contract following his latest round of inflammatory social media posts.

Folau, 30, was formerly a “respectful and humble” poster boy for the AFL when he was headhunted by Greater Western Sydney from the NRL when they became the game’s 18th franchise.

The million-dollar Folau experiment lasted just 13 games, ending when the code-hopper left the Giants following their inaugural season in 2012.

Ms Castle commended Folau as a “great rugby player” but said representing Australia and all Australians on the rugby field is a privilege.

“We are disappointed and saddened by the fact that he will not see out his four-year commitment to the Wallabies and Waratahs,” she said.

“I’ve communicated directly with the players to make it clear that Rugby Australia fully supports their right to their own beliefs and nothing that has happened changes that.

“When we say rugby is a game for all, we mean it. People need to feel safe and welcomed in our game regardless of their gender, race, background, religion, or sexuality.

“We thank the tribunal panel for their decision and we respect the time, consideration and expertise the panel members brought to this process.

Returning to rugby, the Wallabies’ only three-times player of the year and Super Rugby’s all-time leading try-scorer has 72 hours to appeal and force the governing body into proceeding with a second code of conduct hearing.