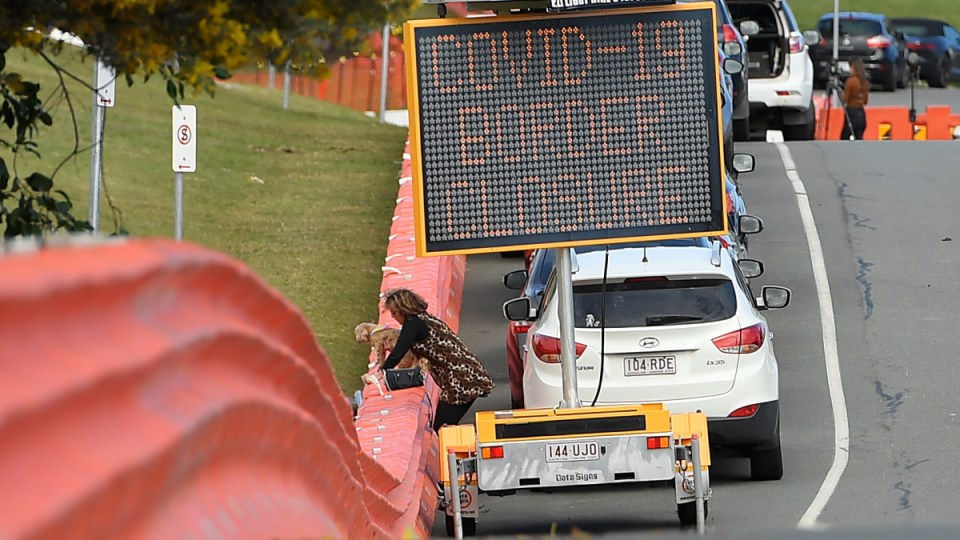 The couple allegedly left Melbourne while it was in lockdown, travelling through NSW to get to Queensland. Photo: AAP

Interstate travel is about to get much easier for millions of NSW residents with two states easing border restrictions.

NSW confirmed just two more coronavirus infections on Tuesday, both in returned travellers who are in hotel quarantine.

It is the first time since July 8 that NSW has had no new cases of community transmission of the coronavirus.

The milestone came as South Australia confirmed it would drop requirements for NSW residents to do a fortnight’s quarantine on entry if the state had no more community transmission infections by midnight Tuesday.

“Subject to no community transmission occurring in NSW between now and midnight tonight we will open the border from midnight tomorrow,” he said.

“That means people from NSW wanting to come into South Australia from Thursday onwards will be able to do that without doing the 14 days of self-isolation.

“This will be a massive, massive relief to people who have been isolated from friends, from family, from business opportunities.”

Premier Annastacia Palaszczuk said the Queensland border zone would be extended into the local government areas of Byron Bay, Ballina, Lismore, Richmond Valley and Glen Innes from 1am on October 1.

From then, residents of those areas will be able to apply for a Queensland border permit and then travel throughout the Sunshine State.

“These areas have a lot in common with Queensland, they do a lot of their business in Queensland so we believe this is the right measure to take,” she said.

Neither state has made any change to its border closures for Victorians, where COVID numbers bounced again on Tuesday.

State health authorities confirmed 28 new COVID cases on Tuesday, up from recent lows of 14 and 11 on Sunday and Monday respectively.

It is the highest number since there were also 28 confirmed infections last Thursday. But it is also the state’s 12th consecutive day with fewer than 50 new virus cases.

And the jump hasn’t stopped Melbourne’s benchmark 14-day case average falling further. Tuesday’s data took it to 32.8 – down from 34.4 on Monday and well below the target of 50 to ease some coronavirus measures from September 28.

There were also three more fatalities. They were all women, aged in their 70s, 90s and older than 100.

The Victorian toll from the pandemic is 766, and the national toll is 854.

Premier Daniel Andrews said Tuesday’s higher number of new infections came from more than 11,000 tests – well up on the 7000 tests reported on Monday.

Mr Andrews was grilled about his plans to reopen Victoria on Tuesday, including whether he had been prepared to wreck the state’s economy to save lives. He said the decision to put health first in the coronavirus pandemic was made at national cabinet.

“The national cabinet has made a decision that instead of allowing this virus to spread throughout the entire Australian community, much like it is in Europe, killing many tens of thousands of people, we would fix the health problem first, and then we would all, in a unified way, set about repairing the economic damage this pandemic has done,” he said.

“You can do very little for livelihoods until you prioritise saving lives and defeating this virus. That’s the path we’re on.”

It came as a poll found nearly two-thirds of voters rated the move to lock down Victoria to quell its deadly outbreak of the virus as “about right”.

The Newspoll survey for The Australian showed 62 per cent of Victorian voters agreed the Premier had managed the virus crisis well, despite the hotel quarantine bungle that unleashed the second wave.