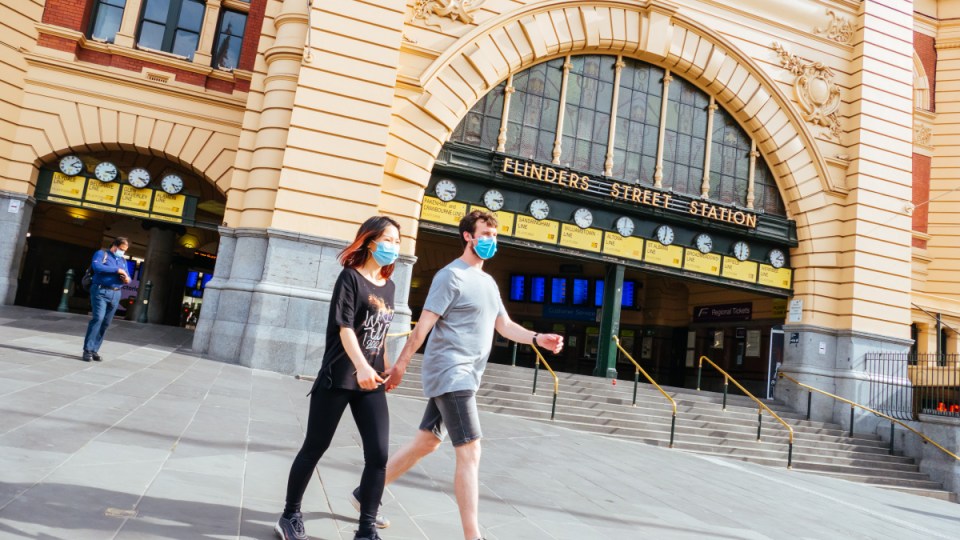 COVID infections in Victoria have bounced up, but not enough to knock Melbourne from its path towards winding back some of its toughest virus restrictions.

State health authorities confirmed 28 new COVID cases on Tuesday, up from recent lows of 14 and 11 on Sunday and Monday respectively.

It is the highest number since there were also 28 confirmed infections last Thursday. But it is also the state’s 12th consecutive day with fewer than 50 new virus cases.

And the jump hasn’t stopped Melbourne’s benchmark 14-day case average falling further. Tuesday’s data took it to 32.8 – down from 34.4 on Monday and well below the target of 50 to ease some coronavirus measures from September 28.

There were also three more fatalities. They were all women, aged in their 70s, 90s and older than 100.

The Victorian toll from the pandemic is 766, and the national toll is 854.

Premier Daniel Andrews said Tuesday’s higher number of new infections came from more than 11,000 tests – well up on the 7000 tests reported on Monday.

Elsewhere, NSW confirmed just two more COVID infections on Tuesday, both in returned travellers in hotel quarantine. Queensland had another day without any new cases.

Meanwhile, Victoria’s recent trend of much lower figures has increased pressure from business groups and political opponents on Mr Andrews to speed up his COVID-19 plan to reopen the state.

After declaring on Monday, “this is not just a good day, this is a great day”, the Premier promised to move on some rules – but not before his declared date.

“I think that we are poised to take some significant steps, albeit they are safe and steady steps, on Sunday,” he said.

“We are in that 30-50 band and it looks like we are going to stay there. That is really very, very important.”

The next step on Melbourne’s path out of virus measures allows a staged return to school for some students and more workplaces to reopen.

“We will have more to say about that process later in the week,” Mr Andrews said.

Opposition Leader Michael O’Brien said Melburnians could not afford to wait until October 26, when more onerous rules such as the 9pm-5am curfew are due to be repealed.

“The epidemiologists back it, the modelling backs it. Daniel Andrews needs to start listening to the experts and stop being a one-man show.”

Mr Andrews has also defended the decision not to issue any fines for those involved in an outbreak in Melbourne’s outer south-east. The so-called Casey cluster, which was sparked by people visiting other households and going further than five kilometres from their own homes – both against Melbourne’s tough restrictions – had 43 cases on Monday.

Such breaches should have meant a $1652 fine, but health officials decided to withhold the penalty to aid contact tracing efforts.

“We need the truth from people – where have you been? Who have you spoken to? Who have you spent time with? By the way, if you answer me honestly, I am going to fine you,” Mr Andrews said on Monday.

“You don’t to be a Rhodes scholar to work out the people will not answer truthfully. Even if they were prepared to pay the fine, they won’t want to get other people into trouble. It is as simple as that.”