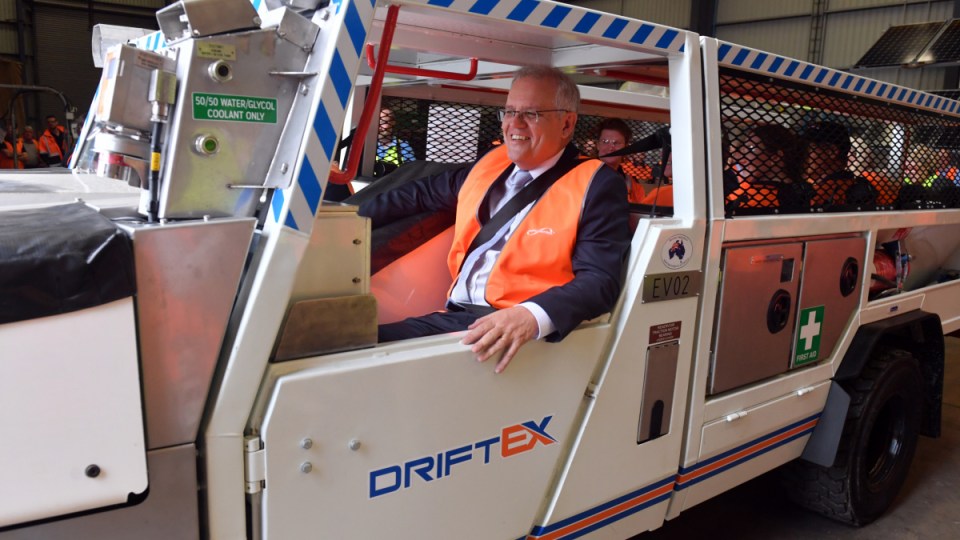 Scott Morrison tries out an electric vehicle at a renewable engineering facility in the Hunter. Photo: AAP

Scott Morrison says his government’s net-zero modelling will be released “soon”, but still refuses to confirm exactly when, despite mounting pressure to explain how the Coalition’s controversial plan works and what it would cost.

The Prime Minister is hoping his plan to criss-cross key battleground seats will spark more positive attention on his government’s climate stance, with his conversations on Tuesday expected to focus on investment in electric vehicle charging.

The road trip also represents an unofficial dry run before next year’s federal election, with Mr Morrison already testing out campaign slogans and attacks on Labor.

“The Labor Party just wants to legislate everything and tell you what to do,” he claimed on Monday, standing in a hard hat and high-vis vest at the Port of Newcastle, flanked by two Liberal candidates.

“They don’t trust Australians to just get on and do it.”

On Tuesday, the PM is set to announce a “future fuels” plan, a $500 million strategy that will include investment in public and household electric vehicle charging.

It’s been nearly three years since Mr Morrison derided Labor’s EV strategy as a war on the Australian weekend. Now his government wants to see private and public investment put up to 1.7 million EVs on roads by 2030.

The prime minister anticipates $250 million in federal funding will be matched by private investment. The funding would be expected to give another 50,000 households and 400 businesses access to charging infrastructure, alongside at least 1000 public charging stations.

“Australians love their family sedan, farmers rely on their trusted ute and our economy counts on trucks and trains to deliver goods from coast to coast,” Mr Morrison said.

“We will not be forcing Australians out of the car they want to drive or penalising those who can least afford it through bans or taxes.

“Instead, the strategy will work to drive down the cost of low and zero emission vehicles, and enhance consumer choice.”

In the  lead up to the 2019 election, Mr Morrison was mocking EVs in some interviews, including claiming Labor’s target of 50 per cent of all new cars being electric by 2030 would “end the weekend”.

“Bill Shorten wants to end the weekend when it comes to his policy on electric vehicles where you’ve got Australians who love being out there in their four-wheel drives,” he said at the time.

Recently returned from the Glasgow climate summit, and keen to put international disappointment and French outrage behind him, Mr Morrison began a week-long roadtrip across federal seats the Coalition hopes to win.

The PM has visited the area at least four times in the past year, a sign of the Coalition’s keenness to pinch the seats from Labor.

On Monday, Mr Morrison announced $1.5 million through the Australian Renewable Energy Agency (ARENA), for a study into a potential hub for clean hydrogen production in Newcastle.

The PM said the Hunter region had “great potential” to be a “key” part of Australia’s plans to produce more hydrogen fuel.

Hydrogen is cleaner than traditional fossil fuels, and the federal government has pointed to the technology as an area Australia could become a world leader.

Both the Coalition and Labor are highlighting how net-zero plans and reducing emissions can be a boon to areas traditionally reliant on mining, like the Hunter, flipping the environmental argument into an economic one.

“If you’re working here in the Hunter, well, you’ve got a bright future,” he said for emphasis.

Boosting investment in technologies like hydrogen is a key part of the government’s net-zero plan, but the government is still resisting growing calls to release the detailed economic and scientific modelling that the plan is built on.

Asked three times on Monday when he would release that modelling, Mr Morrison would only say “soon”.

Two weeks ago, on October 27, the PM said it would be released “in the next few weeks”.

Labor leader Anthony Albanese is facing questions of his own, still resisting calls for the Opposition to detail its 2030 emissions reduction plan.

Labor promised a 45 per cent cut at the last election, while Mr Morrison’s Coalition is only locked in to a 28 per cent reduction, despite government models forecasting up to 35 per cent under current policies.

Labor’s shadow climate minister, Chris Bowen, said on Sunday the opposition wanted to see the government’s net-zero modelling, and wait until after the Glasgow COP26 summit ended, before releasing its 2030 plan.

On Tuesday, Mr Albanese will announce a $200 million plan to improve urban waterways, rivers and catchment areas around parks and playgrounds.

The plan will include funding for community groups to clean up their local areas, as well as revegetation and protecting threatened native species like frogs and birds.

Following Mr Morrison’s visit to Newcastle, Mr Albanese and Labor’s contingent of MPs from the Hunter region released a public statement criticising what they saw as public policy failures in the area.

The Labor statement claimed the Coalition had “forgotten” the Hunter, even accusing the state Liberal government of “stealing our vaccines” – in reference to outrage when COVID-19 jabs meant for Newcastle were diverted to Sydney’s Delta outbreak.

But Mr Morrison had barbs of his own to deliver in the battleground region.

Flanked by Liberal candidates for the seats of Shortland and Paterson, currently held by Labor MPs, he criticised the Opposition during a press conference.

“The Labor Party is always the same way. They want to tell you what to do. They want to legislate everything,” Mr Morrison claimed.

During his trip, the PM also ” [joked] with the locals at Kahibah Sports Club “Where’s my beer?” before stealing a chip at a local cafe while talking to a family eating lunch”, according to his official photographer.

The PM’s net-zero road trip will continue on Tuesday, with his travels over coming days expected to include inner-city Melbourne seats and some more regional areas.

These are also areas the government is looking to retain seats at the coming poll.

Mr Morrison had been under pressure to find a political fix on net zero that would satisfy more socially progressive voters in urban areas as well as those in traditional industries in the bush – a mix of areas he is likely to visit this week.

Some in Labor had theorised Mr Morrison could hold an election this year, with Mr Albanese warning his opposition MPs just weeks ago that the PM could return from Glasgow and call a snap poll for mid-December.

That possibility, however slim it was, seems to have finally been ruled out.

Expect a few more visits to the Hunter before then.