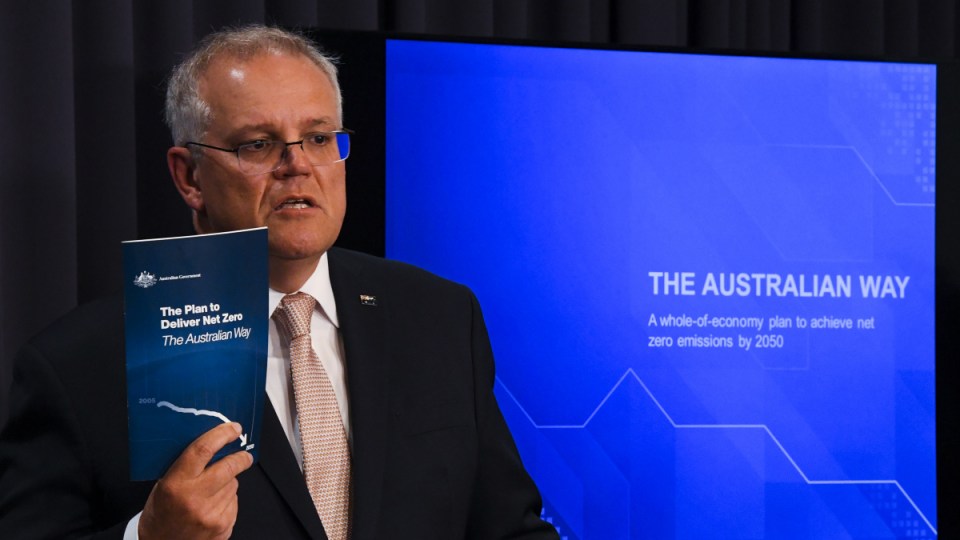 Prime Minister Scott Morrison admits it has been a “difficult time” in the Coalition as the government “wrestled” with agreement on a net-zero emissions target, outlining on Tuesday his long-awaited plan to reach the widely-agreed goal.

But the federal government is yet to share any detailed modelling of the plan, and will rely on significant improvements in green technology to actually reach its emissions goal.

“The world is changing and the world’s response to climate change is changing the world,” Mr Morrison said in a Parliament House press conference.

“This is real … We need to protect against the threats that come from that and we also need to realise the opportunities that help mitigate those threats.”

The PM and Energy Minister Angus Taylor outlined the government’s ‘Long-Term Emissions Reduction Plan’, which sets out the path by which the Coalition forecasts Australia will reach net-zero emissions by 2050.

But government documents state clearly that the plan shows only “how Australia will achieve 85 per cent of the emissions reduction necessary”, and that it is “based on our existing policies”.

That is, no new government policy to reach net zero was announced on Tuesday.

Mr Morrison defended this assumption, saying natural advances in technology were “a given”.

“If we don’t think there’s been a rapid development in technology on hand-held devices in the last 10 years then someone must have been living on a different planet,” he said as an example.

“It is probably one of the safest assumptions that you can make that the rapid introduction of technology will continue to drive these costs down.”

Mr Morrison’s office later suggested tech advances that might form part of the 15 per cent could include hydrogen-fuelled boilers, better coatings for solar panels to improve energy production, more efficient batteries, and feed improvements to reduce methane emissions from livestock.

The government claims its plan will create 100,000 jobs, including 46,000 in mining and heavy industry, as well as double the output of Australia’s heavy industry sector. At the same time, its documents warn that 90 per cent of Australia’s exports – including coal and iron ore – are going to countries with strong net-zero targets, and that world demand for coal is forecast to drop nearly 60 per cent by 2050.

In a breakdown of specific sectors, the government forecasts emissions to drop by up to 97 per cent in electricity by 2050. However, even by then, Mr Taylor said some of Australia’s energy grid would be built on “dispatchable” resources such as coal or gas.

Some Nationals MPs had previously demanded agriculture or resources be excluded from any net-zero target. But Mr Morrison said the strategy was a “whole of economy plan”.

In a Coalition party room meeting on Tuesday morning, he told colleagues it had been a “difficult” time for the Liberal and National parties, as they debated the net-zero commitment. In the press conference, he said the Coalition had “wrestled with it”.

Deputy Prime Minister and Nationals leader Barnaby Joyce is understood to have personally opposed the plan, along with several of his senior ministers. Backbencher Matt Canavan has promised to campaign against the net zero target, setting up a blog titled ‘Not Zero’. Fellow Nationals MP George Christensen, another critic, posted a bizarre video on social media, where Senator Canavan’s face was superimposed on Arnold Schwarzenegger’s character in the Terminator films.

In a slideshow presentation at the press conference, Mr Taylor pointed to graphs showing how technology hits a ‘tipping point’ where it becomes cheap enough to encourage mass uptake, giving examples of less expensive solar panels or transistors leading to sudden sharp increases in use.

A second graph suggested the government believes production of clean hydrogen as a fuel source will hit such a ‘tipping point’ about 2030.

The government is putting more than $20 billion into low-emissions technology by 2030, which it hopes will spark $60 billion-$100 billion in private investment and therefore drive tech advances. Besides hydrogen, Mr Morrison’s plan banks on “ultra-low cost” solar energy, low-emissions steel and aluminium, energy storage, and advances in carbon capture and soil carbon.

The government shared more than 200 pages of information about the net-zero plan and updated emissions projections – but not the detailed modelling underpinning the strategy.

On Monday, Mr Taylor placed a public interest immunity claim on that document, protecting it from release – despite a Senate order for it to be shared – due to it being a cabinet document.

Mr Morrison said the modelling would be released “eventually” and “soon”, but gave no specific timeframe.

Mr Albanese was scathing about the lack of information.

“Today, we learned net zero from the Prime Minister’s press conference. We haven’t seen the modelling and we haven’t had the detail,” he said.

“By their own words, there is nothing new in this plan.”

“I’ve seen more detail in a fortune cookie than in documents released by the government today,” he said.

“It requires leadership and detailed plans. But all we got today was the slides, slogans and not solutions.”

Why the billion-dollar business of movie making in Australia is back on track
View from The Hill: Will Barnaby Joyce be less ‘on board’ with net zero when he’s in the backblocks?
Today's Stories

Net-zero plan ‘right thing to do’, but few details or modelling