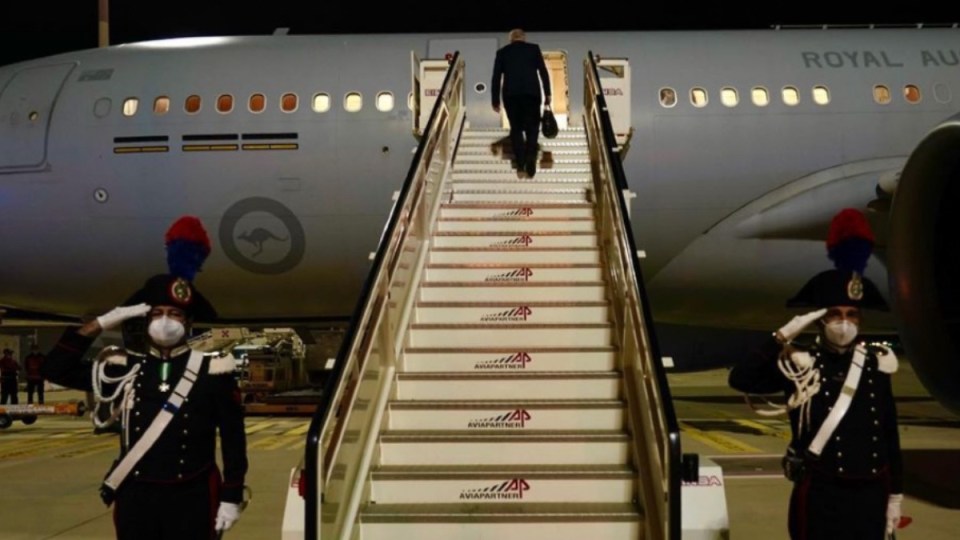 Scott Morrison now faces scrutiny at home and on the world stage over whether he can be "trusted". Photo: Adam Taylor
analysis

Captioning an Instagram photo of Mr Morrison trudging up the stairs to his RAAF jet, “tiring” might be the most apt word to describe the PM’s past few days at Rome’s G20.

Dogged by the spectre of Emmanuel Macron and chased literally across the world by questions about the now-infamous decision to scrap the French submarine contract, Mr Morrison now faces scrutiny at home and on the world stage over whether Australia can be “trusted”.

The extraordinary situation where Mr Macron accused the PM of lies over the subs deal was just the flashpoint after several days of lead-up.

Mr Macron’s first phone call to Mr Morrison, coming after weeks of trying, came just as the PM was about to leave for Europe.

He was literally just about to leave – his RAAF plane reportedly delayed temporarily due to the call.

That timing, whether coincidental or not, set the tone for the week.

Mr Morrison had laughed off and batted away tongue-in-cheek questions from media about whether their G20 meetings would be awkward.

It turned out their first meeting on Saturday may have been a touch frosty: Photos from Mr Morrison’s official photographer Adam Taylor show Mr Macron scowling over the top of his face mask.

The Australian press pack following Mr Morrison didn’t get a look at that brief rendezvous. Only Mr Taylor was there to capture the moment, in a private area of the G20 campus.

Mr Morrison said the French President was “happy to exchange those greetings”, despite what the photo showed.

Mr Taylor later posted photos of Mr Macron and Mr Morrison warmly shaking hands and sharing smiles over a coffee, the follow-up tête-à-tête hinting that perhaps things weren’t as bad as appearances made out.

But mere hours later, Mr Macron dropped a nuclear bomb on the PM, warning the submarines affair was “very bad news for the credibility of Australia”.

Mr Morrison vehemently denied the insinuations, saying he’d been “clear” with Mr Macron on the fate of the French contract.

The story took another dramatic lurch at Mr Morrison’s next press conference hours later, which lay out in great detail his side of the story on his dealings with Paris.

Private texts from Mr Macron to Mr Morrison were conveniently leaked to the press – a spectacular break from norms of such conversations between world leaders being kept private.

The PM refused to answer how the leak could have happened, leaving it up to the imagination.

Instead he went on the attack, claiming criticisms of his dealings were “slurs” and “sledging” the country.

It was a gross simplification, with Mr Macron at pains to point out France’s strong bonds with Australia in war, and his personal fondness for the nation.

Mr Morrison’s invocation of offence on behalf of Australia was an attempt to protect himself from harm, the PM alive to the brewing domestic political storm that threatens to elevate the French submarine issue from a defence procurement problem into a full-blown issue of trust.

Because, as it was blowing up as a G20 sideshow, the escalating international affair was back home being spun as a domestic election issue.

Treasurer Josh Frydenberg put on a smile, claiming the leaders talking was “a positive step” but that there was “clearly a lot of work still to be done”.

Acting PM Barnaby Joyce said he hoped Australia and France could “get over this and move on”, helpfully pointing out Mr Morrison “didn’t deface the Eiffel Tower”.

Mr Morrison is now in Glasgow, where the focus turns to climate change at the COP26 summit.

He will face no lighter scrutiny in Scotland, with Australia copping harsh questions on the world stage around coal, emissions and its net-zero roadmap – including from Mr Macron, who said he used the last-minute phone call in Australia to urge swift action to “cease production and consumption of coal”.

But don’t expect Mr Macron’s weapons-grade subs sledge to fade away any time soon, either.

The G20 blow-up seems destined to end up on a Labor attack ad at the next election, which both sides are already hinting will be fought on the issue of “trust”.

For another, France’s ambassador Jean-Pierre Thebault will address Canberra’s National Press Club on Wednesday, a month after he was recalled to Paris and then sent back to Canberra.

His speech theme? Unclear at this stage, but following his earlier claims of “a serious breach of trust” and warning “we’ll have to revise everything”, it’s probably not hard to imagine what kind of questions Mr Thebault will face.

Mr Taylor wrote that Mr Morrison left Rome “exhausted after spending 27 hours in the air getting here, fighting jet lag” and running “18-19 hour days”. Then he’s in for “another two long days of meetings”, before returning to Australia at the end of the week.

The PM will be happy that he doesn’t face yet another two weeks in quarantine on his return, with NSW scrapping that requirement for returning travellers.

But then it’s two weeks of Parliament, a slate of contentious legislation to pass, and potentially the last sitting fortnight before an election likely early next year.

If being PM is a “thankless tiring job”, it’s unlikely to get any less so over the coming months.