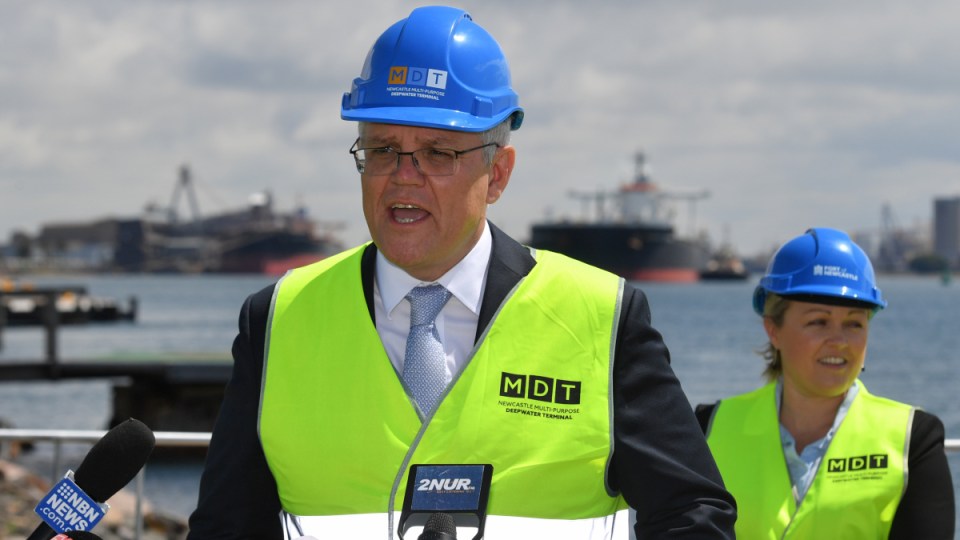 Mr Morrison again reaffirmed his government's commitment to coal, on a visit to Newcastle on Monday. Photo: AAP

Prime Minister Scott Morrison wants to use hydrogen to prolong coal-fired power as Australia is blasted by a key ally as “a great disappointment” on climate change.

The Coalition is spending $1.5 million on a feasibility study for a “clean hydrogen” hub at Newcastle, including to support emissions-intensive industries.

“It is the future fuel, whether it’s how it produces ammonia … which can be used in coal-fired power plants, not just here but all around the rest of the world,” Mr Morrison said in Newcastle on Monday.

“It is the fuel that can charge up our big mining trucks and and get them operating, it can power vehicles to travel over extremely long distances.

“Hydrogen is simply a fuel that can power our traditional industries and our energy generation.”

The government is providing half of the funding for the hydrogen study backed by the Port of Newcastle and the Macquarie Group’s green investment subsidiary.

Mr Morrison’s global climate pitch at the COP26 climate summit in Glasgow, relying on private industry technology advancements, was met with scepticism by many.

Australia refused to sign up to a commitment to cut methane emissions 30 per cent this decade and a separate pledge to phase out coal-fired power.

A top British climate change adviser said it was “a great disappointment to the rest of the world” for a country like Australia to be so behind on climate issues.

“When Scott Morrison tried to explain what he was going to do between now and 2030, it was just a whole series of words,” British Climate Change Committee chair Lord Deben told ABC radio.

“You cannot go forward without signing up to eliminating coal.

“What was so disappointing for us was the way it appeared that your Prime Minister really doesn’t understand the urgency of what we have to do.”

Lord Deben warned other nations would be less willing to trade with Australia unless it committed to more ambitious climate standards.

“Already, the British-Australian trade deal is under huge pressure in this country because we don’t see why we should import things from Australia unless Australia meets the same standards,” he said.

Junior Coalition partner, the Nationals, extracted concessions in exchange for support for a net zero by 2050 target, including returning Resources Minister Keith Pitt to cabinet.

They refused to back a stronger 2030 emissions reduction target, leaving Australia to take to Glasgow updated projections of a cut between 30 and 35 per cent.

Key aspects of the Nationals’ agreement for net zero, including a future fund for regional and rural Australia, are yet to be detailed.

“Patience is a virtue,” Mr Pitt said when pressed for information.

“These are agreements between the two leaders – they’ll work their way through the normal processes.”

“Greenhouse gas emissions do not recognise borders, and to tackle climate change we need a globally collaborative approach and that is what this forum is about,” NSW Treasurer Matt Kean said.

Progress has been made in Glasgow. But Australia is well behind the pack
Today's Stories