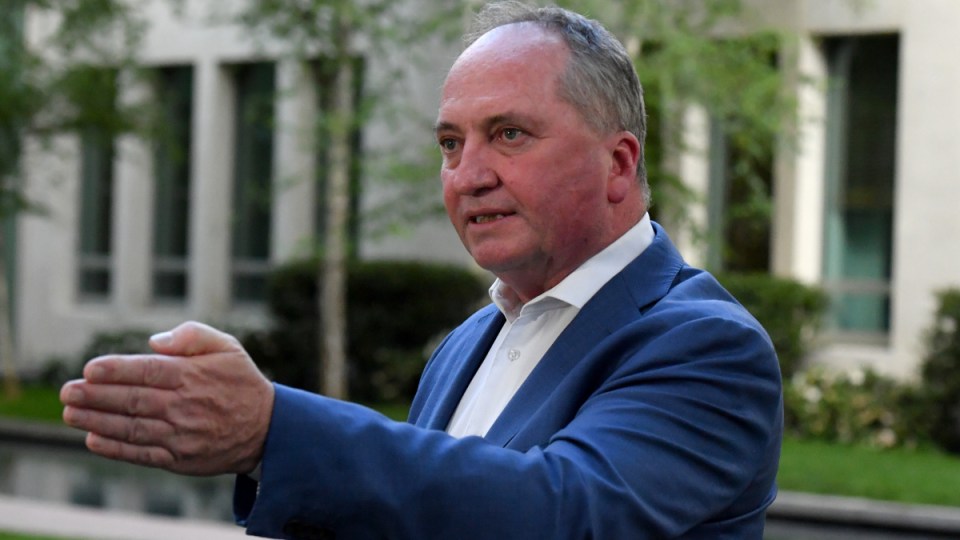 After months of slow progress and a week of ugly public debate, the Nationals have finally agreed to support a net-zero emissions plan, but Barnaby Joyce has refused to say what he demanded or received.

It was a development immediately slammed as “fraudulent” by opponents, with little detail on what changes or money the Nationals extracted for their backing.

“We’ve given a broad outline of our position, in favour of a cabinet submission that reflects the negotiated settlement between myself and the Prime Minister,” Mr Joyce said on Sunday evening.

“The details of that negotiated settlement will remain private.”

Nationals MPs met again on Sunday afternoon, to finally lock in an agreement to the net-zero plan. It followed a list of demands given to the PM on Friday.

Despite a week of veiled (and not-so-veiled) warnings that they were to be taken seriously, the Nationals had shared little publicly in recent days about what they wanted in exchange for supporting net zero.

But a potential sticking point in negotiations was the Nationals’ calls to support nuclear energy.

Pressed repeatedly by journalists in a Sunday evening press conference, Mr Joyce said “I don’t have to” share what the Nationals asked for, or received, for their support.

It is unclear when those details will be made public.

Last week, the government declined a Senate order to publicly release the modelling on which the net-zero plan is based, instead delaying that submission until Friday – the day after Mr Morrison leaves for Glasgow.

“The position regional people are in now are vastly better than they were before we started those negotiations,” Mr Joyce said of the negotiations.

“These are conditions that were never ever there before we started negotiations.”

However, Mr Joyce stressed the Nationals’ support was conditional and would hinge on the substance of their negotiations being included in the final plan that goes before the cabinet this week.

He declined to say whether he personally supported the net-zero plan in the Nationals’ party room, but revealed there was no formal vote on the issue.

It’s understood about a third of the Nationals held serious or implacable concerns about the plan.

Despite few disclosures from Mr Joyce in Sunday’s press conference, deputy leader David Littleproud offered minor hints earlier in the day about what the Nationals had asked for.

Mr Littleproud said the list of demands had included “safeguards and mechanisms within existing policy settings to protect regional and rural Australia”.

News Corp papers reported part of the demands could include the government backing explorations of nuclear power. Mr Littleproud didn’t rule it out on Sunday, but admitted it lacked popular public support.

“Nuclear is something the National Party obviously stands firmly behind as a party room, but we understand you’ve got to educate before you legislate, and the electorate isn’t necessarily there with us at the moment,” he said.

He challenged Nationals MPs who rejected the net-zero plan to quit the ministry.

“I want to see the Prime Minister lead the world when it comes to taking action on climate change because it is in our economic interests to do so.”

The net-zero plan will now go to federal cabinet for discussion and approval.

Mr Morrison will fly to Glasgow later this week, for the COP26 climate summit.

He is expected to formally lock in Australia’s net-zero pledge at the forum, following its expected official confirmation at a cabinet meeting this week.

The federal cabinet has 23 ministers but only four from the Nationals.

The principle of cabinet solidarity means that any minister who refuses to publicly support a cabinet decision is obliged to quit.

Nationals Senate leader Bridget McKenzie, who does sit in cabinet, warned last week of things getting “ugly” if Mr Morrison didn’t give due consideration to the junior Coalition party’s concerns.

On Sunday, Senator McKenzie said she was “proud” the Nationals had “stood up for our people”.

“We’re not trying to blow the show up,” he said.

Mr Joyce didn’t directly answer a question at his press conference about whether ministers should resign, saying every Nationals MP was “allowed to express their views”.

Labor leader Anthony Albanese said it was “surreal” that the Nationals’ list of demands had been kept private.

He also agreed with Mr Kean’s assessment of nuclear power being a “fantasy”.

“It’s as if it has nothing to do with them.”

Nationals back net zero, but offer no details on what they got in exchange