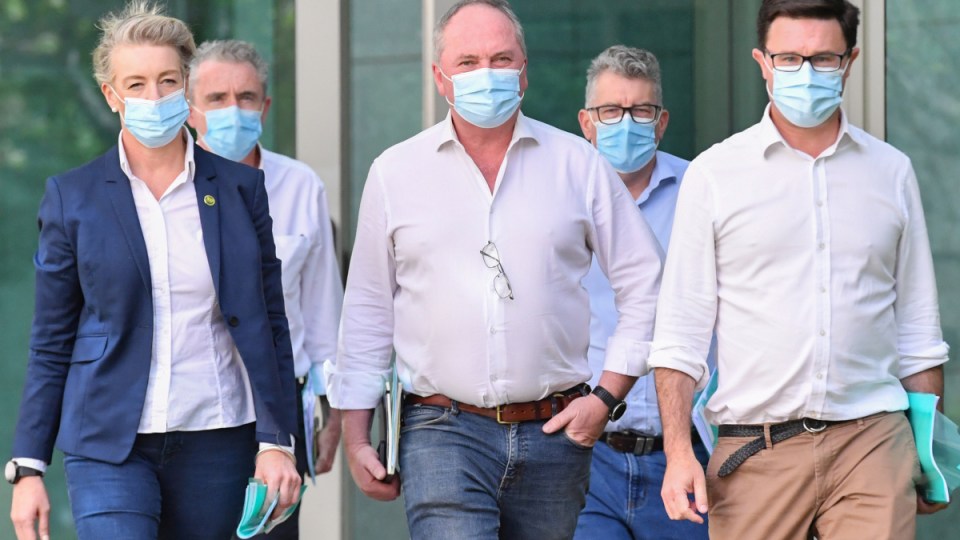 Nationals leader Barnaby Joyce has indicated his party will support the process towards achieving net-zero emissions by 2050.

The in-principle support would depend on the submission to go before federal cabinet, Mr Joyce told a press conference on Sunday afternoon following a two-hour meeting of the junior Coalition party in Parliament House.

“We are in support of a process going forward to net zero,” Mr Joyce told reporters in Canberra after a week-long series of negotiations with Prime Minister Scott Morrison.

It is understood the key to getting the junior Coalition partner over the line was a “socio-economic safety valve” that would include regular reviews of the effect of the emissions target on jobs and industries in rural and regional areas to ensure no one was left behind.

News Corp papers also reported the demands included the prospect of changes to federal legislation that would open the way for nuclear power.

But the announcement was greeted with derision by opponents, who argue the target should be for 2030, not 2050.

Mr Joyce refused to say if he personally supported the net-zero decision, and said “I don’t have to” reveal what Nationals had asked for or were agreed to by the PM.

Asked whether there would be any ministers stepping down from cabinet for disagreeing with the stance, Mr Joyce also refused to answer.

‘‘It’s a vexed issue and people have strong feelings on both sides,’’ he said.

The decision, if approved at Wednesday’s meeting of cabinet, means Mr Morrison can fly to the Glasgow climate talks hours later with a 2050 target.

Green leader Adam Bandt tweeted his disapproval of the announcement.

“Of course Nats and Libs will strike a fraudulent climate deal, based on more coal and gas & 2030 targets that will fry us.

“Australia’s run by an accountant in a cowboy hat and a coal-hugger in a cap, neither of whom really want to take climate action. That’s our main problem.”

Former PM Kevin Rudd agreed, tweeting that ‘‘the political charade rolls on’’ and ‘‘All to distract from the real question of what Morrison will commit to in real and additional carbon reductions by 2030, as the Liberals committed to do this year in the Paris agreement of 2015’’.

Barnaby Joyce: "we are in support of a process going forward to net zero" pic.twitter.com/5BzK8T6aig

Opposition Leader Anthony Albanese earlier said it was extraordinary Mr Morrison isn’t in the room where decisions are being made about Australia’s economic and environmental future.

“This is a government that is frozen in time while the world warms around. This is not really a government, more like a rabble,” he told reporters in Canberra.

Before the meeting Nationals deputy leader David Littleproud declined to disclose what was in the party’s list of demands to secure a deal.

But News Corp newspapers reported that the demands include changes to federal legislation that would open the way to explore nuclear power in Australia, overturning a long-standing ban.

“Nuclear is something the Nationals party obviously stands firmly behind as a party room, but we understand you have got to educate before you legislate,” Mr Littleproud said.

“The electorate isn’t necessarily there with us at the moment. We have to be pragmatic about that. You have still got to win elections.”

Mystery surrounds Prince Harry’s memoir as celebrations ramp up for platinum jubilee
Almost there: Fresh ad campaigns target the 15% who have skipped their jabs
Today's Stories

Nationals agree to support process towards net-zero target by 2050