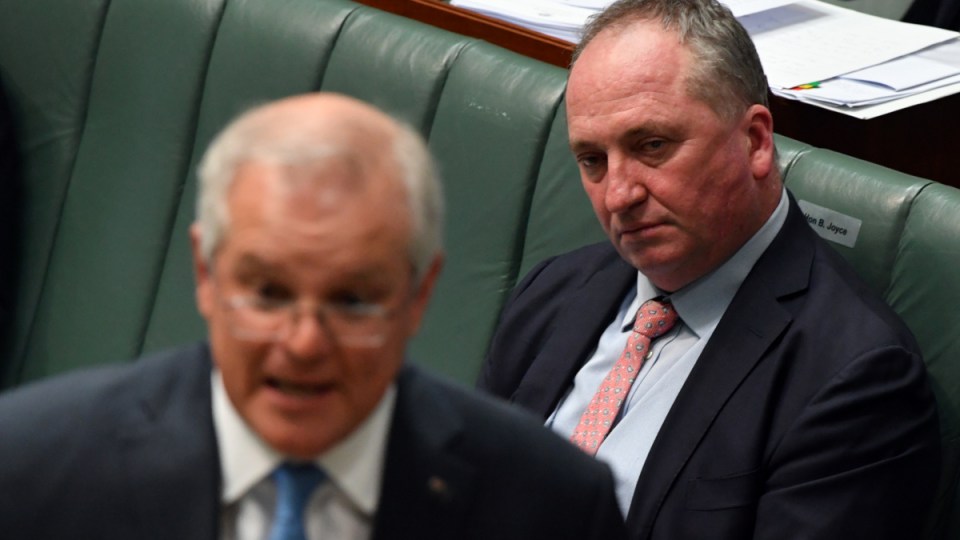 Matt Canavan’s attempt to force the government to release the modelling on its net-zero plan was a transparent attempt to further scorn the emissions cuts he abhors.

The government’s refusal to do so, defying a Senate order, capped off another unedifying week for accountability and openness in government.

The week-long charade of the Nationals’ ham-fisted negotiations over net zero was what dominated headlines, with both Coalition parties extracting what they wanted from the drawn-out drama.

But it was some complicated parliamentary parlour games that eminent barrister and anti-corruption advocate Geoffrey Watson described as having “trashed integrity” and “a new low”.

The government closing ranks around Christian Porter was described by former prime minister Malcolm Turnbull as “gaslighting”; while two further incidents where the government refused Senate orders to produce key public interest documents piled on top of a disappointing week.

By the time this column is published, Barnaby Joyce will likely have handed the Nationals’ list of demands to Scott Morrison.

The timing ensures another whole week of will-they-or-won’t-they drama, preceding more Nationals meetings over the weekend, more party room meetings next week, and the final cabinet sign-off next Wednesday, literally hours before the PM flies to Glasgow.

It means there will almost certainly be no time for the public to substantially examine or discuss the plan before the Prime Minister announces it on the world stage.

A cynic could say, despite the bitter public drama inside the Coalition – including Senator Canavan and Bridget McKenzie warning of “ugly” consequences – both parties come out of it looking good to their constituents.

The Nationals got to stand up to their big brother, to extract some  (still to be determined) safeguards or money for the regions, and show they watered down the emissions deal.

The Liberals get to show they fought hard for a net-zero target, to reach what they’ll describe as a sensible middle between the climate deniers and the tree-hugging greenies.

And Mr Morrison gets to zip off to Scotland, basking in the glow of being the first Prime Minister to stitch up a climate deal without blowing up their government (albeit a deal that climate experts say won’t be enough).

Senator Canavan installed himself as an unlikely star player this week, constantly goading his party over net zero. His tweets became news items as he railed against the plan – in particular, echoing John Howard’s famous line on asylum seekers:

Apparently lost on Senator Canavan was the irony in saying Australians should decide on net zero, while he and just 20 of his Nationals colleagues essentially ground politics to a halt as they roadblocked progress.

Instead of respectfully putting the pistols away and negotiating calmly, and acknowledging the Nationals – with 10 per cent of seats in Parliament – had little mandate to stand in the way of a target that 80 per cent of Australians support, the junior Coalition partner hovered their fingers over the self-destruct button all week.

Instead of respecting the wishes of the 80 per cent of Australians, the Nationals made the whole week solely about their 23 members: A diverse group including a Ken, a Kevin and a Keith; a Mark, a Matt and a Michael; an Anne and an Andrew, and two Davids.

The government’s decision to reject a motion referring Mr Porter’s blind trust to Parliament’s privileges committee, in favour of asking for broader clarification on how members should disclose anonymous donations, left a bad taste in the mouths of many.

Following the government’s stalling tactic, there now may be little further opportunity to formally probe Mr Porter’s trust before the next election.

Mr Watson, a former counsel to NSW’s ICAC, called it a “black day” and claimed the government had “trashed integrity” and were “in the process of trashing Parliamentary procedure”.

But it was another Canavan tweet that set off a quietly revealing episode in the Senate on Thursday.

After claiming the Nationals hadn’t seen modelling on the net-zero target – an assertion Mr Joyce denied – Senator Canavan asked why it should be “secret”.

It led to him co-sponsoring a motion from Rex Patrick, which ordered the government’s modelling to be tabled in the Senate by Thursday morning.

A Labor motion to again compel the tabling of the documents was stymied by government delay tactics. By Thursday afternoon, Labor tried again.

It was up to government minister Zed Seselja to basically say “no”, rejecting the Senate’s request.

Instead, he blamed the “sensitivities” of the modelling being cabinet documents, and the “time frame” given to respond, for the government flat-out refusing to hand over the modelling.

But never fear! As Senator Seselja promised “a more detailed response” would be tabled by next Friday.

Coincidentally (or perhaps not), that’s the day after Mr Morrison leaves for Glasgow, and the day after the Parliament rises for the end of this sitting fortnight; again, giving little chance for public scrutiny of the plan.

Earlier in the day, the government had refused a similar request for documents from Greens senator Janet Rice, who’d asked for the infamous “top 20 marginals” list from the Urban Congestion Fund’s train station car parks program.

“Neither I, nor my office, not the Department of Infrastructure, Regional Development and Communications has seen any document matching the description of the order,” wrote minister Paul Fletcher.

That’s despite the Australian National Audit Office, whose audit report kicked off scrutiny of the car parks program, saying it was aware of the marginals list.

In many ways, this week was about the government running down the clock.

“You know, it’s kind of funny, every day on waking and thinking, ‘oh they’ve hit a new low’. I hope we’ve got close to the bottom.”