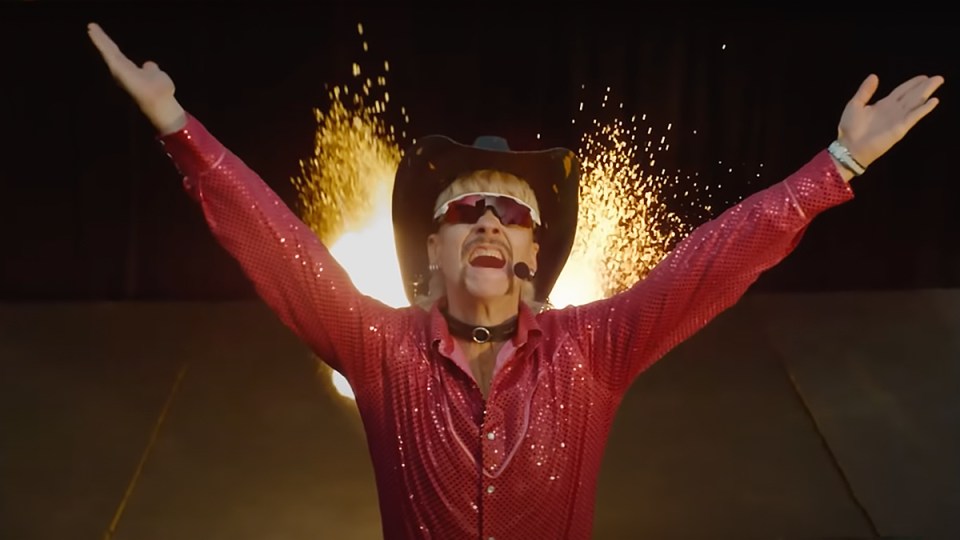 Prepare for another wild ride with a new series about Joe Exotic. Photo: Stan

It’s been a long time coming.

The former zookeeper, who operated a zoo in Wynnewood, Oklahoma,  was sentenced in January 2020 to 22 years in prison after he was convicted of trying to hire two different men to kill animal welfare activist Carole Baskin.

Both starred in the original Netflix series Tiger King: Murder, Mayhem and Madness, and it was a light-bulb moment for producers across the globe.

Hollywood royalty Nicolas Cage was among big names set to play the anti-hero (in another series), but he bowed out citing the scripts had faded into the distance.

Instead, Stan is bringing us US actor and Broadway star John Cameron Mitchell, 58, Kate McKinnon (Ghostbusters and an SNL veteran), a bunch of Aussie actors and big cats in a scripted adaptation of the 2020 podcast Joe Exotic: Tiger King.

Joe vs Carole was filmed across Brisbane and the Gold Coast and will start streaming from March 4.

On securing the coveted role of Joe, Mitchell told Variety he could relate, just “a little bit”, to his life.

“I’m thrilled to take on the role of this modern folk anti-hero.

“Joe and I are the same age and like him, I grew up queer in Texas, Oklahoma and Kansas, so I feel like I know a little bit about this guy and his desperate attempt to conquer an inhospitable world.”

If you’ve had enough of Joe’s real-life saga – he was back in court only last month for re-sentencing, pleading with a US federal judge not to let him die in jail – there are shows galore on all the platforms.

Sit back and enjoy the feast. And be impressed, Aussie actors are starring in a lot of content, a clear sign our film and television industry has stayed afloat.

This Is Going To Hurt: Binge, March 1

Best known as Q in the Bond movies, Ben Whishaw stars in this new seven-part series based on the best-selling memoir by Adam Kay.

Kay, who was an obstetrician and gynaecologist, penned his experiences on the maternity ward, documenting all the high emotion, joy and deep sadness that came with the job.

Whishaw brings that to life, “making his way through the ranks of hospital hierarchy – junior enough to suffer the crippling hours, but senior enough to face a constant barrage of terrifying responsibilities,” says Stan.

He is exposed to HIV the weekend of his high school graduation and has to wait a very long, torturous three months to get tested.

Premiering on streaming service Disney+ after a cinematic release on Boxing Day 2021, the Oscar-winning Steven Spielberg’s West Side Story is a musical masterpiece and can be enjoyed in your own home with surround sound.

Watch it ahead of this year’s Academy Awards. It might just take home Best Picture!

Everybody by now should know Taika Waititi (Jo-Jo Rabbit, Thor).

The ten-episode series is based loosely on the true adventures of Stede Bonnet (Rhys Darby), a pampered aristocrat who abandoned his life of privilege to become a pirate.

This is a three-episode premiere (eight all up) on the story of Elizabeth Holmes, played by Amanda Seyfried, and the company she founded, Theranos, on the strength of her claim that she had the patented tech to revolutionise the healthcare industry.

Unfolding in real-time, Paramount says The Desperate Hour “follows the recently widowed mother Amy Carr (Watts) who is doing her best to restore normalcy to the lives of her young daughter and teenage son in their small town” when a shooting takes place at her son’s school.

The suspense only grows as she tries to race against time to save her boy.

Pieces of Her: Netflix, March 4

Australian actor Toni Collette stars in Pieces of Her, where a woman tries to piece together her mother’s dark past after a violent attack in their small town brings hidden threats and deadly secrets to light.

More Than This: Paramount+, March 4

This is a ground-breaking, six-part Australian original drama series written by teens for teens.

The official synopsis says it’s a “real, authentic and often raw story of five 17-year-old students and their teacher, whose diverse worlds collide when they are thrown together into a Year 12 English class. It breaks down school pressures, bullying, body image, relationships and sexuality.”

Winning Time: The Rise of the Lakers Dynasty: Binge, March 7

Produced by Adam McKay (Succession, Step Brothers), this fast-break series is about the professional and personal lives of the 1980s Los Angeles Lakers, one of sports’ most dominant dynasties.

“They were a team that defined an era, both on and off the court”, says Binge.

We haven’t seen Alicia Silverstone on screen for a while but this storyline could be a blast.

She arrives with boyfriend Kyle, played by James Tupper, at a remote seaside villa in Vietnam for a romantic getaway.

There’s storms, survival on a raft – oh, and a school of great white sharks.

And if the romance and drama from Bridgerton (out March 25) aren’t enough, docu-soap Byron Baes will bring you the best of Australia’s influencers who flock to Byron Bay for its warm, beachy beauty and cool, creative vibe.

Sun, surf, sound-healing and a whole lot of drama, what more can one ask for?

Even viewers who weren’t big on motorsports loved the fly-on-the-wall action and drama of twenty drivers — some veterans, some rookies — competing in another drama-filled and adrenaline-fuelled season of Formula 1 racing.

Historically, the experts say, the CCA is the most accurate predictor of the Academy Awards, so if you’re a true entertainment fan and love a red carpet, watch it all unfold at the Fairmont Century Plaza Hotel.

From Chris Smith, the executive producer of Tiger King and director of Fyre: The Greatest Party that Never Happened, comes Bad Vegan.

It sounds like a wild four-part doco not to be missed.

Netflix says it “explores how Sarma Melngailis, the celebrity restaurateur behind the glittering New York hotspot Pure Food and Wine, went from being the queen of vegan cuisine to being known as the ‘Vegan Fugitive’.

This one, they say, takes viewers on a journey more bizarre than fiction.

Viscount Anthony Bridgerton is deciding who to marry, only to meet his match in his intended bride’s headstrong big sister.

The Girl From Plainville: Stan, March 30

Based on the Esquire article of the same name by Jesse Barron, the limited series explores Carter’s relationship with Conrad Roy III and the events that led to his death and, later, her conviction of involuntary manslaughter.

March streaming guide: From Joe Exotic to F1 – there’s a feast of original entertainment this month