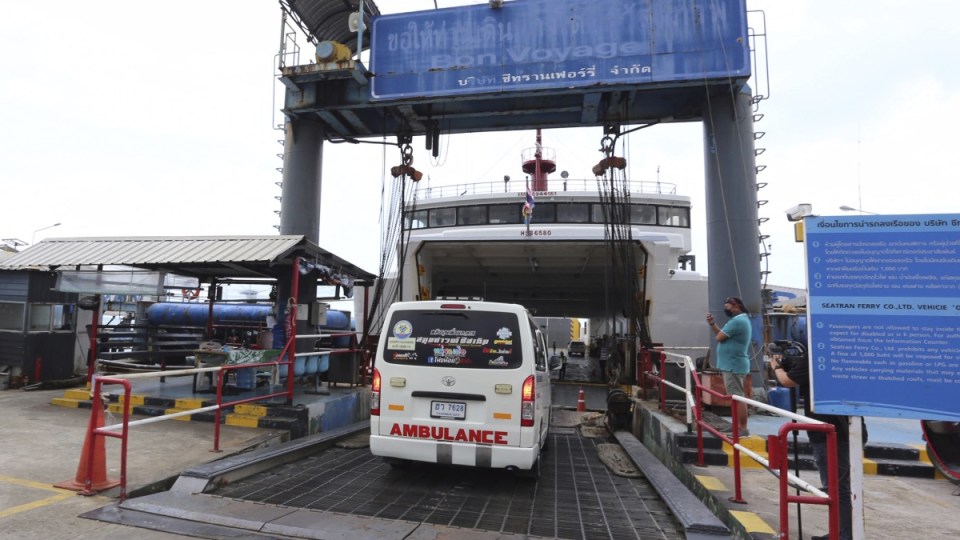 Warne's body was on Sunday taken from Koh Samui island by ferry to the Surat Thani mainland. Photo: AP

Shane Warne’s body has been cleared to return to Australia as Thai authorities ruled the cricket legend’s death was due to natural causes and his family released a statement expressing their heartbreak.

Warne’s body is expected to be flown out of Bangkok on Tuesday.

While the cricketer’s loved ones have thanked Thai authorities, questions have been raised about the level of security provided while the 52-year-old’s body was transported by ferry from Koh Samui.

It’s been revealed a German woman talked her way into the back of the ambulance that held Warne’s body. She was alone with the body for at least 30 seconds.

ABC reports the stranger had a Thai woman with her and that person told an official who stopped them at the ferry dock: “Yeah, yeah she knows him…Thank you very much, she’s a friend.”

Footage showed a blonde woman carrying a bunch of white flowers into the back of the van.

The ABC spoke to the woman, identified as a resident of Koh Samui named “Barbara”.

“I am a big fan of him. It’s very sad that we lost him. I just took the flowers to pay condolences,” she said.

“I am sorry about yesterday but I [did] not mean [any] negative act by that. I am a big fan, he is a great player.”

Thai police have questioned the woman but ruled her actions were not illegal.

The incident reportedly sparked concern among Australian officials in Thailand and Warne’s friends, who said they did not recognise the woman.

Warne was found by friends unresponsive in his bedroom at a luxury villa Friday.

Despite their frantic attempts to revive him, he was pronounced dead at a nearby hospital a short time later of a suspected heart attack.

In a statement Monday night, the Warne family said the night of March 4 was for them the beginning of “a never-ending nightmare”, and the cricket icon’s death was “a tragedy we will never come to terms with”.

“Looking to a future without Shane is inconceivable, hopefully the mountain of happy memories we all have will help us cope with our ongoing grief,” his father and mother Keith and Brigitte said.

Warne’s son Jackson wrote: “To my brother, my best friend, to my dad, I love you so much. I don’t think anything is ever going to fill the void you have left in my heart.”

Warne’s youngest daughter Summer wrote: “Dad, I miss you so much already. I wish I could’ve hugged you tighter in what I didn’t know were my final moments with you. And your final breaths were only moments away.”

Eldest daughter Brooke wrote: “I am lucky and will forever be so proud to call you my dad forever. I love you to infinity and back and I will miss you forever.”

While Thai authorities are confident Warne’s death was due to natural causes, the findings of the autopsy are yet to be released.

His body is being prepared for a flight home to Melbourne, where his family will hold a private service.

A state funeral will likely take place within weeks.

“To find words to adequately express our sadness is an impossible task
… hopefully the mountain of happy memories we all have will help us cope with our ongoing grief.”

More details have been revealed about the Melbourne-born cricket legend’s passing.

One of the paramedics called to the scene on Friday after Warne was found unconscious in his villa has described how his friends desperately tried to revive him by applying CPR.

“They were desperate. I think one was crying. They were really stressed and panicked,” Anuch Han-iam told British tabloid The Sun.

“I could see they were all shocked and I just tried to concentrate and do my best.”

Mr Anuch said the room was clean and there were no signs of partying.

“I did my best for him and gave all my energy. I’m so sorry that I couldn’t help him,” he said.

He also had asthma and had seen a doctor about his heart.

“He did go on these ridiculous sorts of diets, and he was just finished with one,” he told Nine Network on the weekend.

“He obviously smoked most of his life. I don’t know. I think it was just a massive heart attack.”

Warne was only three days into a planned three-month holiday.

His friend Andrew Neophitou, who was among the group, had gone to check on him.

“They were going to have a drink … or go and meet someone to go out and have a drink at 5pm and Neo knocked on his door at 5.15pm because Warnie is always on time,” Mr Erskine said.

Victorian Premier Daniel Andrews confirmed on Sunday Warne’s family had accepted the government’s offer of a state funeral, with more details to come.

“It will be an opportunity for Victorians to pay tribute to his contribution to his sport, to our state and the country,” Mr Andrews said.