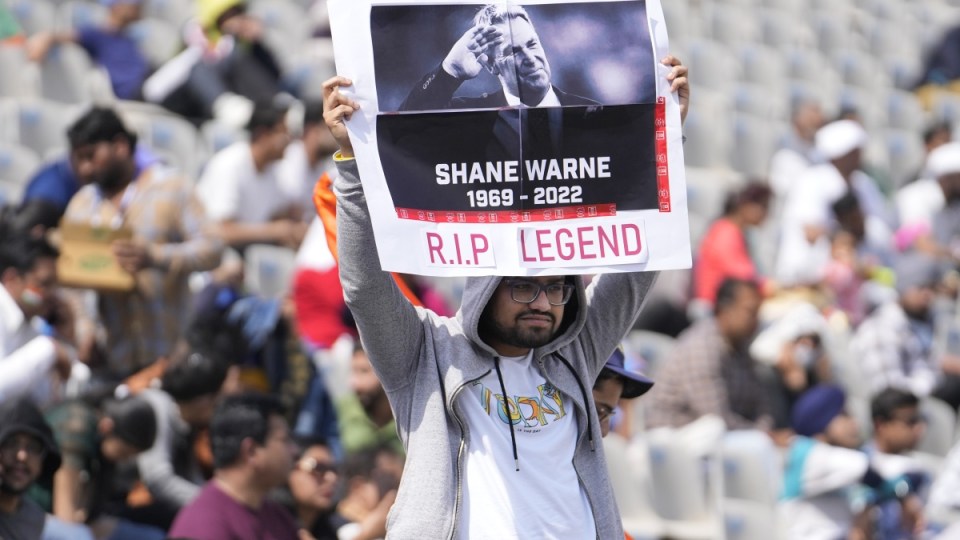 A fan holds tribute to Shane Warne on the third day of the first Test match between India and Sri Lanka in Mohali, India. Photo: AAP

One of the paramedics who tried to save Shane Warne has described how the cricketer’s panicked friends desperately tried to wake him after he suffered a suspected heart attack in Thailand.

Paramedic Anuch Han-iam told British tabloid The Sun there were four or five other men in Warne’s room at the Koh Samui villa when he and a colleague arrived on Friday afternoon local time.

Warne’s friends were trying to revive the 52-year-old before Mr Anuch took over CPR.

“They were desperate. I think one was crying. They were really stressed and panicked,” the paramedic told the newspaper.

“They kept trying to wake him and I heard someone saying, ‘come on, Shane. Come on, Shane’.

“I could see they were all shocked and I just tried to concentrate and do my best.”

Mr Anuch said the room was clean and there were no signs of partying such as beer or cigarettes.

“I did my best for him and gave all my energy. I’m so sorry that I couldn’t help him.”

The revelations came as one of the three friends with Warne on holiday in Thailand shared details of the cricketer’s last hours. Warne was staying in Thailand in a private villa the group, one of whom performed CPR after finding him unresponsive when he did not show up for dinner.

Tom Hall, who met and became friends with Warne at a charity poker tournament about 15 years ago, penned a tribute in Sporting News, of which he is chief executive, late on Sunday.

“Rather than sample some of the local Thai fare, we tuck into a plate of Vegemite on toast. Shane chomping away: ‘Geez, you can’t beat Vegemite with some butter, always great wherever you are in the world’,” he wrote.

“This was to turn out to be his last meal. Ever the caring father, as I was leaving, he headed up to his bedroom to call his kids.”

Mr Hall said none of the group in Thailand knew Warne had recently visited a doctor, although he had told one friend of chest pains and shortness of breath.

“He knew he was a bit overweight and was getting back into training harder,” Mr Hall wrote.

“His travel companions from Australia did everything they could, the local ambulance crews got there fast. There were no unusual circumstances.”

He praised Australian officials in Thailand their support since Warne’s death, and “for helping us get Shane back to his family as fast as we can”. The article finishes with a message to Warne’s father Keith, and to the cricketer’s three children.

“Keith, Brooke, Jacko, Summer, I am so sorry for your loss and will see you soon,” he wrote.

Warne was taken by ambulance to Thai International Hospital and later his body was transferred to Koh Samui Hospital. His death is not being treated as suspicious.

An autopsy was to be performed at the main state hospital in Surat Thani province on Sunday.

He also had asthma and had seen a doctor about his heart.

Warne’s manager said the cricketer had finished a “ridiculous” diet of consuming only fluids days before his death.

“He did go on these ridiculous sort of diets, and he was just finished with one,” James Erskine told Nine’s Weekend Today on Sunday.

“He obviously smoked most of his life. I don’t know. I think it was just a massive heart attack.”

Mr Erskine told Fox Cricket that Warne was only three days into a planned three-month holiday and alone watching cricket when he fell ill.

His friend Andrew Neophitou, who was among the group staying in the same villa, went to check on him.

“They were going to have a drink … or go and meet someone to go out and have a drink at 5pm and Neo knocked on his door at 5.15 pm because Warnie is always on time,” Mr Erskine said.

Victorian Premier Daniel Andrews confirmed on Sunday that Warne’s family had accepted the government’s offer of a state funeral, with more details to be annouced in coming days.

“It will be an opportunity for Victorians to pay tribute to his contribution to his sport, to our state and the country,” Mr Andrews said.