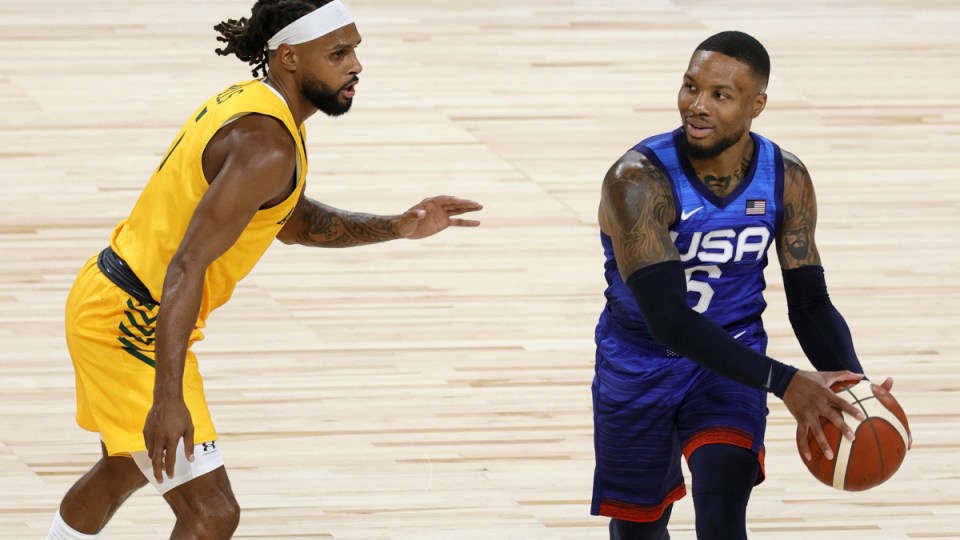 History beckons for the Boomers who need one more win to secure their first Olympic medal. Photo: Getty

In the land of the samurai, the Boomers will attempt to put years of Olympic heartache to the sword on Thursday, after Peter Bol and Ash Moloney’s stunning performances highlighted a dramatic day 12 for the Aussies.

From historic firsts to drought-breaking triumphs, a day of reckoning looms for the green and gold – none more so than for the Kookaburras and Australia’s men’s basketball team, who take on the US in a semi-final knowing victory will secure a first-ever Olympic medal.

The Boomers will have extra incentive to win on Thursday afternoon, having watched their Opal counterparts be dismantled by the US women’s team on Wednesday.

Meanwhile, Peter Bol went within a whisker of an historic medal in the 800m on Wednesday night, in a heart-breaking final 50m which saw Bol – who led the pack for most of the race – run out of legs just before the finish line.

Ash Moloney is sitting in second place with the last five events of the decathlon to be held on Thursday, while national record holder Nicola McDermott and 2014 Commonwealth Games champion Eleanor Patterson are both legitimate medal chances in the women’s high jump heading into the qualifying round.

Olympic semi-finals are a place the Boomers know all too well, having four times finished fourth at the Games, most recently a heart-breaking one-point loss to Spain in the bronze medal game in Rio five years ago.

Their task could not be tougher – the US having won six of the last seven men’s basketball gold medals – and they will be smarting after the Boomers handed them a shock loss in a pre-Olympics warm-up game.

And while the Boomers can still break their medal duck even if they lose to the US, that’s not how they will approach their semi-final.

“I think that’s the worst mindset you can have regardless of the situation or who you’re playing or where it is or whatever. We’re well aware that they’re tough games, but we’re a confident group.”

America won the first of three encounters in 24 hours with Australia in convincing fashion, trouncing the Opals 79-55, in the quarter-final.

Like the Boomers, the Matildas can secure a first Olympic medal when they take on the US in the bronze medal match.

And like basketball, the US is a powerhouse in women’s soccer, having won four golds and a silver the six times the event has been held at the Olympics.

Elsewhere, the Kookaburras aim to inspire the next generation of Australian hockey players by winning gold at the Tokyo Olympics on Thursday.

Australia booked their place in the final by beating Germany 3-1 and will meet world champions Belgium for the sport’s biggest prize.

“Those guys in ’04 inspired a lot of us,” Kookaburras star Eddie Ockenden said.

“I was a teenage kid than watching and I was an aspiring hockey player.

“If we could do that it would be fantastic, but every Olympics it is a different team.”

No one needs to tell Melissa Wu about near misses – she has finished fourth, fifth and sixth in the 10m platform diving at the past three games.

But the 29-year-old has secured her best chance yet for a podium finish, qualifying fourth for Thursday’s semi-final – with the top 12 to progress to the afternoon final.

Australia’s Mariafe Artacho Del Solar and Taliqua Clancy will go into their beach volleyball semi-final against Latvian pair Tina Graudina and Anastasija Kravcenova full of confidence, having beaten the world No.1 combination from Canada in the quarter-finals.

Australia has only medalled once in the sport – Natalie Cook and Kerri Pottharst’s epic effort on the sands of Bondi in 2000 – but one more win by Artacho Del Solar and Clancy can break that drought.

Stewart McSweyn is expected to advance from the 1500m semi-finals, while fellow Australian Oliver Hoare is also in contention to book a place in the medal race on Saturday.

Jessica Hull and Linden Hall produced brilliant semi-final runs on Wednesday night to ensure that Australia will be the only country with two representatives in the Olympic women’s 1500 metres final in Tokyo.

Tokyo Olympics: A day of golden opportunity beckons for Australia