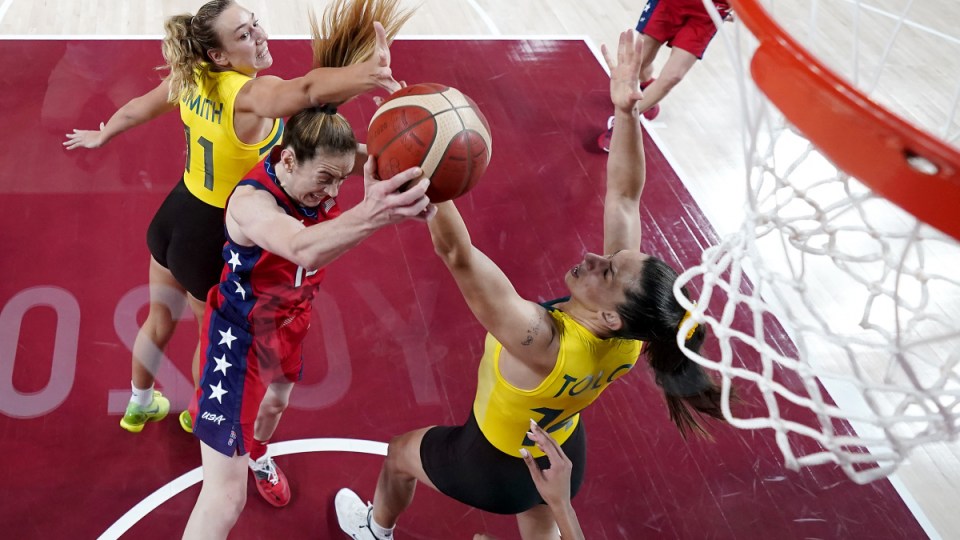 Six-time defending champions US won its quarter-final 79-55 on Wednesday, the writing on the wall after a 19-1 run against the Opals in the first quarter.

For three-time silver medallists Australia, the early exit follows a quarter-final loss to Serbia in Rio five years ago and caps a campaign that was flipped on its head by WNBA All-Star Cambage’s absence due to mental health reasons.

Winless in their first two games, the Opals scraped into the final eight on points differential with a late flurry in a win against Puerto Rico.

FT | Opals knocked out at the quarterfinals at #Tokyo2020. #TokyoTogether #Basketball pic.twitter.com/q0JZPB62gt

They had beaten the United States in an Olympic warm-up game just a day after Cambage’s withdrawal, but on the big stage the centre’s absence was exposed as the US stretched its Games winning streak to 53 matches.

Brondello had tried to downplay Cambage’s absence, but after their limp exit couldn’t keep up the charade.

“It’s been a really interesting few weeks that we’ve had to deal with … losing a big part of our team and trying to find our identity,” she said.

“It was hard as a coach when you have a player in and the last minute taken out, especially with the limited preparation (with two games in 18 months due to COVID-19).

“Lack of preparation (hurt) and maybe a little bit of emotional energy … it wasn’t easy, I was pretty drained to be quite honest.

“Liz, she’s one of the best players in the world.”

The Opals had won medals at five straight Games, three times losing in the gold medal game to the United States.

They were never in with a chance in Tokyo though, despite Leilani Mitchell’s (14 points, six assists) best performance of the tournament and another strong Cayla George (11 points, seven rebounds) showing.

Breanna Stewart was the architect for the United States with 23 points, while Chelsea Gray had eight assists and Brittney Griner (15 points, eight rebounds, two steals, two blocks) did as she pleased.

The United States forced 21 turnovers, their superior height, length and strength too much as Brondello also lamented the Opals’ lack of defensive “fight”.

Brondello’s decision not to select potential offensive sparks Shyla Heal and Sami Whitcomb will also be scrutinised as they look ahead to next year’s World Cup in Sydney.

But she said regardless of who played, they needed to find a way to play more ahead of their next major tournament.

“We’ve got really good players and it’s finding the right chemistry so we can highlight the players capable of putting up big numbers for us,” the coach said.

“We didn’t have our offensive flow – that’s not an excuse, but a reality – we didn’t have any kind of preparation to play a major tournament, like all of the other teams (did).”

The United States will play Serbia, which came from behind to beat China 77-70, in the semi-final.

Japan meets Belgium and Spain plays France in the other quarter-finals.

Opals bundled out of Tokyo Games after USA mismatch