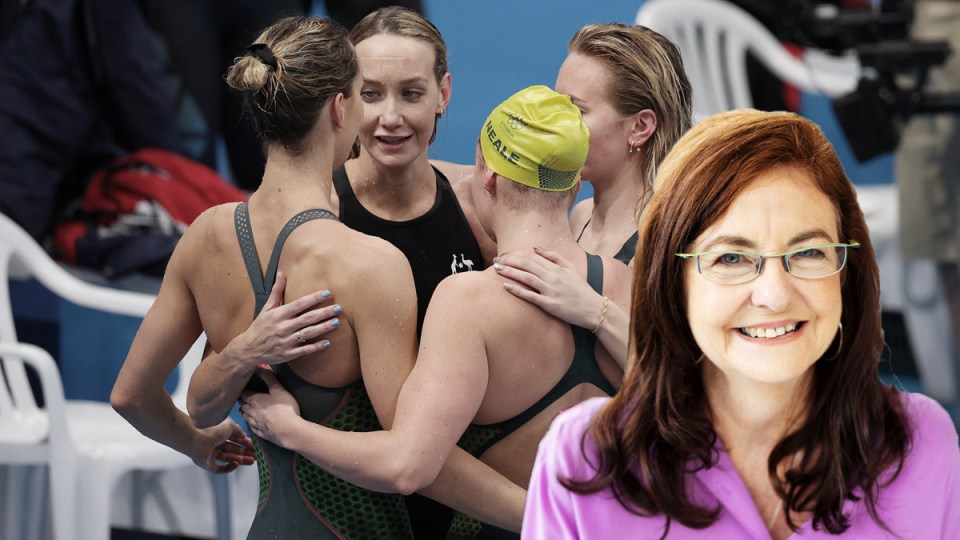 This Olympics, despite COVID trying to kill it off, is showcasing marvellous physical feats.

Olympic records are being broken and world champions made in the pool and on Tokyo Bay and in a dozen other venues across the Japanese capital.

But the real gold, being televised to millions around the world, is the heart and soul of our young Australian swimmers, particularly female.

The good sportsmanship, vulnerability, introspection and friendship is what the Games should be about.

And this swimming team is wearing those attributes as its brand.

It’s a tribute to them, and a multimillion-dollar marketing bonanza to the sort of Games we can host Down Under in 2032.

The friendship of our 4×100 metre women’s relay team.

The vulnerability of a teen girl, who looks to the sky, and thanks her dad for the gold medal she deserved more than anyone.

The hand on the shoulder, the whispered commiseration and hearty congratulations we’ve seen daily is an antidote to the brutish and ignorant thuggery that sometimes colours too much of our sporting story.

Take a chunk of headlines, at any time, about behaviour in sport. Few of them provide a lesson for our children.

From wild parental clashes at schoolboy games to NRL players ignoring the most basic of COVID rules, we are drip fed a diet of bad sportsmanship and even worse behaviour.

Ash Barty’s win at Wimbledon flipped that, showing you don’t have to be bad or brash to take home the big trophy.

But our girls in Tokyo have smashed the record for it.

Imagine swimming in the heats of a world-class event, winning, and then not progressing to the final.

That’s what happened to Mollie O’Callaghan and Madi Wilson, and they’ve worn that decision with smiles, and screamed support for those who replaced them.

We should build a dais, just for them, on their return.

That relay friendship, where they compete and support each other equally, is a tonic for the social media stories that envelop our teen girls. The 4×100 metre relay team might be Olympian champions, but they are also textbook models for how teams should really work.

Or just take Ariarne Titmus, after she stole the show off five-time Olympic champion American Katie Ledecky a couple of times this week.

The couple, whose rivalry has been fanned by American media for weeks, hugged and thanked each other after their first swim. Thanked each other! All class. And a telling illustration of how good sports talk.

Titmus showed it again, after her second gold medal win, and when the talk was dominated by her coach Dean Boxall and his wild provocative celebratory spectator dance.

The gold medal belonged as much to him as it did to her, she explained.

And in a sentence, she did the proverbial stand climb Barty tried in a bid to thank her team at Wimbledon only a few weeks before.

Kaylee McKeown showed the vulnerability of a young woman we’d all want to call our own when she looked to the sky immediately after touching home first.

That gold medal was for her dad, who died less than a year ago. And her vulnerability, on show for the world, won our hearts more than any record time could.

The humility of Emma McKeon. Emily Seebohm, whose first words after being beaten by McKeown, was to tell the world how happy she was for her Australian teammate.

So count the gold. Tally the silver. Record the bronze. But in the pool, already, we’ve won in almost every race.

The challenge is, perhaps, how our teen girl swimmers could coach some of our other sports stars.

For real sporting heroes, look no further than our Olympic girls in the pool