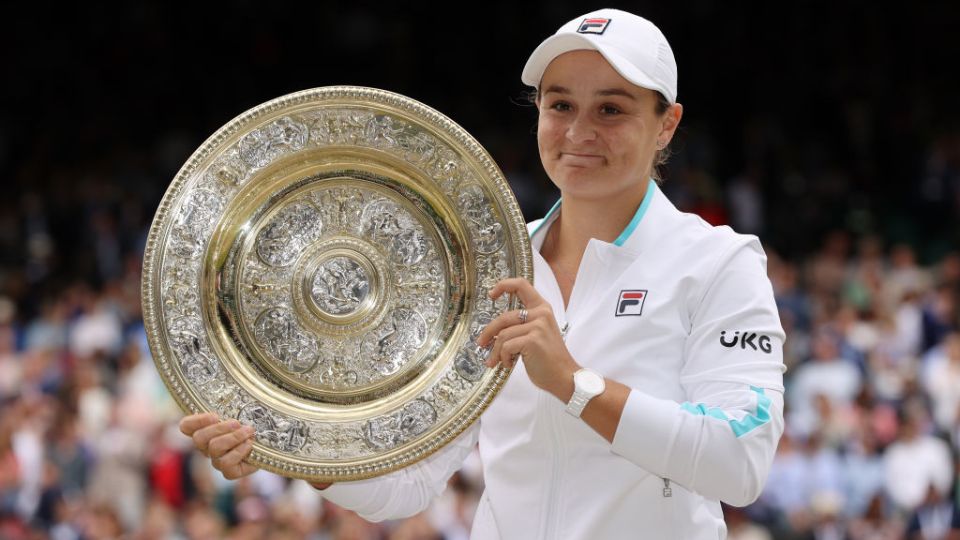 Ash Barty's name will be etched in history on the Venus Rosewater Dish. Photo: Getty

As Ash Barty dropped to her knees in tears, she savoured a triumphant moment that for a long time she had dared not dream could ever happen.

The tenacious comeback queen, who overcame serious injury to claim one of the biggest titles in tennis, defeated Karolina Pliskova 6-3 6-7 6-3 to win the Wimbledon singles final.

Afterwards Barty revealed her success was “nothing short of a miracle” as she described the full extent of the hip injury she feared would derail her hopes.

Barty, who wore a scallop-hem skirt in tribute to her idol Evonne Goolagong Cawley, has become Australia’s first ladies Wimbledon singles champion since Goolagong held the same trophy in 1980.

In a rollercoaster match on Centre Court, Barty repelled a ferocious comeback from Pliskova and imposed her own glorious all-court game in a compelling three-setter.

She told the cheering throng: “You’ve made my dream so special.

“It took me a long to verbalise the fact that I wanted to dare to dream and say I wanted to win this incredible tournament — and being able to live out my dream right now with everyone here has made it better than I could ever imagine.

“I didn’t sleep a lot last night, thinking about all the ‘what ifs’ but when I came out on this court, I felt at home in a way.”

Barty said she’d have to play the match of her life to take the crown and she did just that, breaking the biggest server in the tournament six times after Pliskova’s delivery had previously been breached only four times all event.

And having emulated another Aussie Wimbledon winner Pat Cash by scrambling — inelegantly, she thought — up into her players’ box to embrace coach Craig Tyzzer and her team, Barty shed a tear about Goolagong.

“She does (mean a lot to me),” said Barty, whose dress was a version of that worn by Goolagong when lifting the 1971 title.

“I hope I made Evonne proud.”

Barty effectively had to win the match twice, having served for it at 6-5 in the second set only for the Czech world No.13 to fight back from chronic early nerves, win a net cord-aided tiebreak and take the match into a decider.

That’s when Barty showed why she’s the world No.1, recovering her poise and unleashing that killer slice increasingly to take the final set after one hour and 55 minutes of a final that simply grew in quality as the match unfolded.

There were nerves to be conquered right to the end.

Barty, serving for the match a second time at 5-3 in the third, looked as if she might miss out again when Pliskova eked out a break point but a seventh ace down the T and a tame backhand into the net from the Czech took her to heaven.

It left the 25-year-old champion, barely able to register how she’d just won her second grand slam title after the French Open win of 2019, slumping to her haunches, her hands over her tearful face as it dawned what she’d achieved.

To start with, it seemed she might just run away with one of the most one-sided final wins Wimbledon had ever seen as Pliskova seemed almost paralysed by the occasion, with her stiff movement and unusually feeble serving seeing her lose the match’s first 14 points.

It couldn’t be that easy — and it wasn’t as Pliskova, happily, freed herself from her suffocation to make a match of it.

Ultimately, though, she couldn’t stop what the Aussie reckoned would be a pretty low-key “Barty party” on Saturday.

‘Nothing short of a miracle’

Afterwards Barty revealed her injury was so bad that her team kept the gloomy news from her a month before Wimbledon that it could keep her out until August.

“I think them not telling me that just proved how much we were up against the odds.

“There weren’t too many radiologists in Australia who had seen my injury. In a sense, it was a two-month injury.

“Being able to play here at Wimbledon was nothing short of a miracle.

“I think now to be playing pain-free through this event was incredible.”

Yet Barty never stopped believing in herself and she always had the feeling that there would be a “silver lining” after the trying month where even she recognised that making the first round of Wimbledon would be “touch and go”.

“I’m a firm believer in everything happens for a reason, the good moments and the tough moments,” she said.

Australia’s new Wimbledon champion has taken a journey like no-one else.

A kid who walked away from a glittering tennis future to shine in a collective environment at cricket and then returned 18 months later to start a new solo ascent to the very pinnacle. Unreal.

And winning Wimbledon was, to Barty, the pinnacle. Ten years ago, she came through the gates of the All England Club as a scared, wide-eyed 15-year-old feeling a very long way from home from Queensland and walked away with the coveted girls’ title.

Now, still feeling that same sense of wonder, she’s become only the fourth women’s player in the Open era to complete the junior-senior double after Ann Jones, Martina Hingis and Amelie Mauresmo.

Yet those around Barty, like her coach Craig Tyzzer, smile that nothing she does can surprise them. In so many ways, she seems so ordinary, while being utterly extraordinary.

She’s the perfect team player, yet the most striking of individuals.

"I hope I made Evonne proud"

It’s been a delight for tennis connoisseurs, with Marina Navratilova among those who’ve been drooling this past fortnight about not just the lovely variety in her game but the evident pleasure she’s taking as she goes for her shots.

“Since she’s come back, she’s loved every single second of being on the court and it comes through in how she plays,” says Navratilova.

This Wimbledon triumph has seen the full flowering of someone who’s made a conscious effort to enjoy every single moment of her grand global tour after choosing to step aside last year.

“It’s about understanding that you don’t get to play tennis for ever, you don’t get these opportunities every single day and genuinely having that childlike, carefree kind of playfulness is really important,” said Barty.

“And even though I’m extremely professional and serious and driven and impassioned about my career, it’s also important to back off sometimes and just enjoy it and try to smell the roses on the way and take it all in.”

‘Nothing short of a miracle’: Teary Ash Barty triumphs at Wimbledon in rollercoaster match