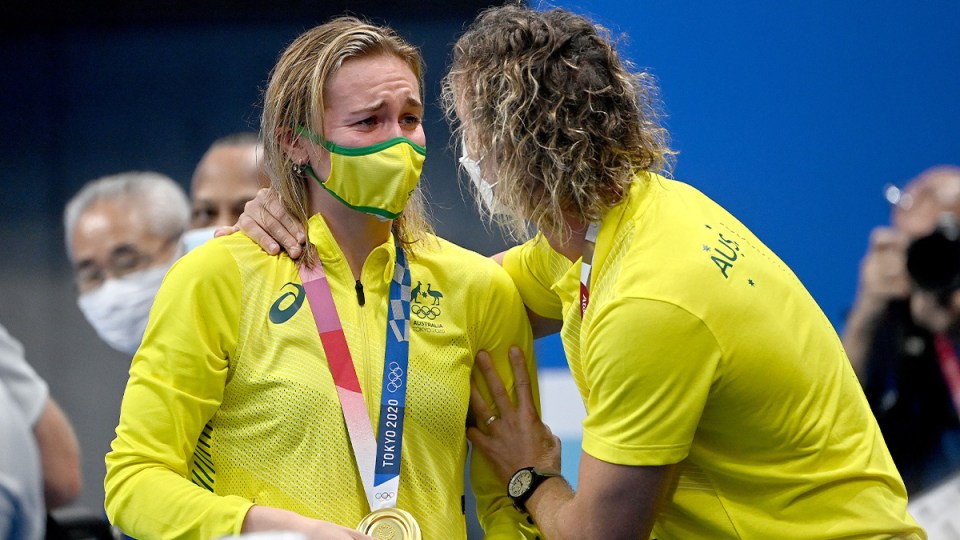 Struck by emotion, the 20-year-old Olympian from Launceston shared a touching moment with her coach Dean Boxall as she collected her second gold medal of the Games.

But the dual-gold-medallist has has her sights set on even more victories, as she swims towards Australian Olympic immortality.

Ariarne Titmus could join the elite

Titmus could join Australian swimming’s elite half-dozen to win three golds at a single Games, with the 800m freestyle and 4x200m freestyle relay still to come.

“I’m not going to let it settle down too much, I’m only halfway through my program,” Titmus said after the win.

“I’m thinking about the relay and the 800-metre now and I don’t want to ruin the rest of my meet by celebrating too hard.

“But I’m very proud of what I’ve achieved.”

“I’m just from a small town in Tasmania and it just goes to show if you believe you can do something, you can 100 per cent do it if you work for it.”

Titmus’ 200-metre final was billed as the next chapter in her rivalry with Katie Ledecky, a five-time Olympic champion from the United States.

The pair’s dual over 400-metre instantly entered Olympic folklore but Titmus’ challenge in the shorter distance on Wednesday came from elsewhere.

The Aussie was forced to dig deep as China’s Hong Kong-based swimmer Siobhan Bernadette Haughey led until the last 10 metres, when Titmus found another gear and reeled her in with a trademark finishing flurry.

Ledecky was consigned to fifth place, but got her own gold medal later on Wednesday in the 1500-metre freestyle.

After the win, Titmus told Channel 7 she knew her opponents were nipping at her heels as she neared the finish.

“I could see I was trying to move Siobhan (Haughey, Hong Kong) down on the third 50,” she said.

“I had no idea where she was on the last lap. I knew I had Katie covered but Siobhan was the person that was there.”

Titmus powered through the pool and onto the podium almost an hour after Australia’s first and second gold medals of the day.

Earlier, the Australian men’s fours crew made it a golden rowing double after the women topped the podium in the same event in the previous race.

Lucy Stephan, Rosie Popa, Jessica Morrison and Annabelle McIntyre started the spree when they narrowly held off the Netherlands in a thrilling women’s coxless fours victory in Tokyo.

Next up it was Jack Hargreaves, Alex Purnell, Alex Hill and Spencer Turrin who followed in the Oarsome Foursome’s footsteps to win back the men’s coxless fours title in another chaotic finish.

Australia won gold in the men’s fours in 1992 and 1996 to earn the Oarsome Foursome tag, but Great Britain had won the event at every Olympics since.

Trailing by a boat length at the halfway point, the Brits pushed so hard their boat veered into the path of the Italians, who held their line to finish third as Romania clinched silver.

It is the fifth time Australia has won three gold medals on a single Olympic day, with the hat-trick taking Australia to fifth on the gold medal tally.

More medals from Aussies in the pool

After Graham touched in seventh, Chalmers powered into third at the halfway stage.

Incerti then held ground in a pack trailing well behind the Brits, with Australia fourth when Neill entered for the last leg.

The 19-year-old then produced a class swim under pressure.

Neill clocked the fast split of all the Australians to not only hold off the United States for the bronze medal, but almost pinch silver from the Russians.

Australia was fourth when Neill entered for the last leg and the 19-year-old produced the nation’s fastest split of the final.

Earlier, Chalmers, the only Australian individual trying to defend an Olympic title in Tokyo, advanced into the 100-metre freestyle final.

And Australia’s Brianna Throssel booked a berth in the 200-metre butterfly final, logging the sixth-fastest time through Wednesday’s semi-finals.

Meanwhile, Aussie cyclists Richie Porte and Rohan Dennis will peddle for gold at the Fuji International Speedway on Wednesday afternoon.