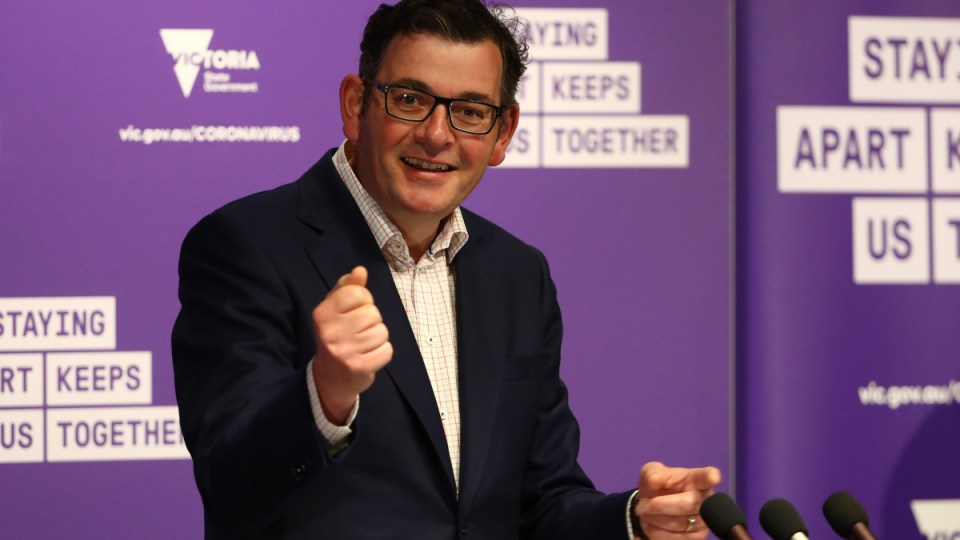 Premier Daniel Andrews has briefed the media for 120 days on end during his state's coronavirus battle. Photo: Getty

Victoria’s new virus cases have tumbled back into single figures, with just seven confirmed on Friday.

The daily tally – the first under 10 since Monday – has taken Melbourne’s 14-day average of new infections down to 12.8.

In regional Victoria, where there have been no new cases for several days, it is just 0.2.

There were also two more COVID fatalities on Friday, taking the Victorian toll from the pandemic to 802. The national toll is 890.

Premier Daniel Andrews will give more details at a briefing later on Friday.

But the slump in new cases came amid concerns about an expanding cluster linked to Melbourne’s biggest shopping centre.

Of Thursday’s 15 reported cases, four were linked to the Chadstone shopping centre outbreak that has grown to eight and includes a family in Frankston.

A household of up to nine people linked to the cluster is among those in isolation as authorities try to keep a lid on the virus’ spread.

Victorian acting deputy chief health officer Allen Cheng described the outbreak as “a bit of a situation” but said Chadstone had been deep-cleaned and relevant staff contact traced.

“It is perfectly safe to go back into Chadstone at this time,” he said.

Anyone who visited the shopping centre, particularly the fresh food precinct, the Butcher Club and Coles last week, has been urged to be on alert for any COVID-19 symptoms.

A testing site was due to open at the shopping centre on Thursday.

Staff from Spotless were replaced by police mid-shift on Wednesday at the Novotel in Southbank, after a healthcare worker told The Age she feared their practices would lead to further COVID-19 outbreaks.

Victoria’s hotel quarantine program was overhauled in June after private security guards caught the virus from returned travellers and spread it into the community, sparking the state’s devastating second wave.

Mr Andrews said the government had learned from mistakes made in the first iteration of the program.

He said the workers were taken off shift as part of a “transition to a new set of arrangements that is unfolding”.

Nine hotel quarantine workers have tested positive to the coronavirus since the overhaul, including five Spotless employees.

The Victorian government maintains they didn’t contract the virus at work, with the inquiry investigating the infections.