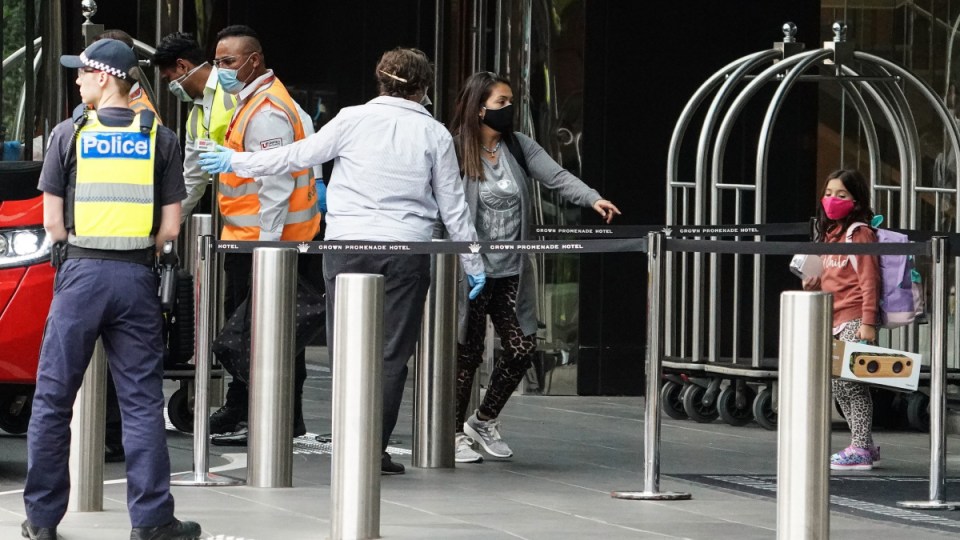 The number of Australian citizens and permanent residents returning home will be halved. Photo: AAP

Staff assigned to two Melbourne quarantine hotels have tested positive to the coronavirus, despite an overhaul of the program after outbreaks among security guards sparked Victoria’s second wave.

A spokeswoman from the Department of Justice and Community Safety on Tuesday confirmed nine people working at the Brady Hotel and Grand Chancellor Hotel in the Melbourne CBD had contracted the virus since July 27.

The hotels have been providing accommodation to Victorians who cannot safely isolate at home.

“There are no active cases, with the last positive case in late August,” the spokeswoman said.

Of the nine, one worked for the Department of Health and Human Services while another was a Victoria Police member.

“Neither has been assessed as having acquired COVID-19 at a health hotel,” the spokeswoman said.

Another two staff members who contracted the virus were from Alfred Health, while the remaining five worked for catering and cleaning company Spotless.

The spokeswoman said the Alfred Health and Spotless cases were most likely due to community transmission “outside of the health hotels”.

“There have been no positive COVID-19 cases of DJCS staff during this time,” she said.

The hotel quarantine program has been overhauled and an inquiry set up after outbreaks among security staff at the Rydges on Swanston and Stamford Plaza hotels in mid-May and June.

Lawyers assisting the inquiry on Monday said the two outbreaks were to blame for the state’s second wave of coronavirus, which has infected 18,000 people and claimed more than 750 lives.

“One only needs to pause and to reflect on those figures to appreciate the full scope of devastation and despair occasioned as a result of the outbreaks,” Ben Ihle said.

Health Minister Jenny Mikakos resigned on Saturday after she was named by Premier Daniel Andrews as the minister responsible for the program.

The DHHS handed over responsibility for the program to the Department of Justice in July.

The inquiry, headed by retired judge Jennifer Coate, will hand down its final report on November 6.

International flights will remain diverted from Victoria until the report is made public.