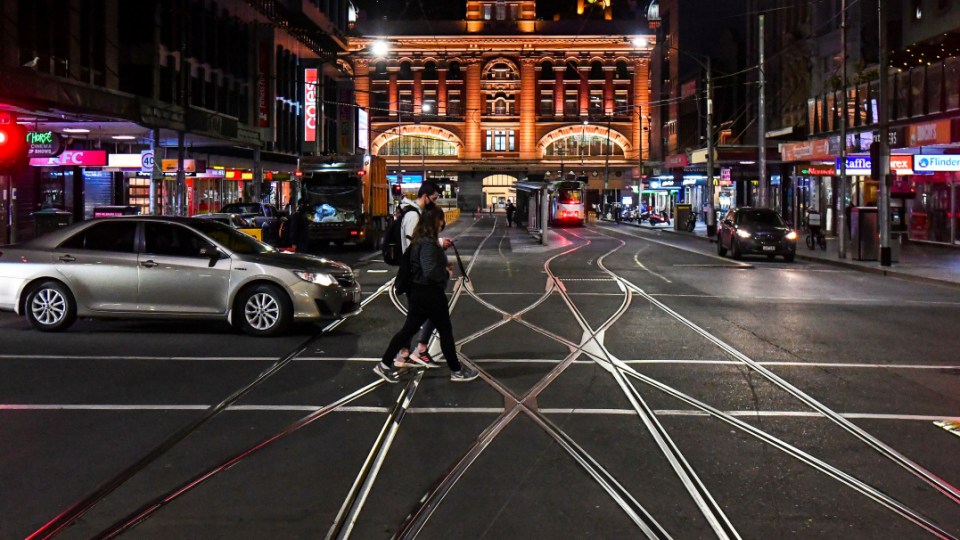 Melburnians enjoy their first night out in the city after the daily curfew was abandoned. Photo: Getty

Coronavirus infections in Victoria have returned to double figures, with 10 new cases confirmed on Tuesday.

It has dipped below 20 for the first time in months, to sit at 18.2. The figure for country Victoria remains at 0.6.

“The strategy is delivering us the lower numbers and I think an increased sense of confidence that we are going to be able to continue to take those safe and steady steps,” Premier Daniel Andrews said.

Their deaths take Victoria’s COVID toll to 794 and the Australian toll to 882.

Tuesday’s lift in new cases comes after the state’s daily tally sank to a 15-week low of five on Monday. But that figure also came off a plunge in test numbers to just 6800.

“That number continues to fall, just as so many numbers right across  this pandemic and its response continue to come down in a steady and really very, very pleasing fashion,” he said.

On Monday, however, Mr Andrews gave a terse response to a claim from former Victorian health minister Jenny Mikakos that the state was closing in on eradicating COVID-19.

Ms Mikakos, who resigned as a minister in the fallout from the inquiry into Victoria’s botched hotel quarantine program and will also quit parliament, raised the ire of her former boss by writing on Monday: “We are well on the way to eradication.”

But, asked about it at his regular briefing on Monday, Mr Andrews was blunt.

“I have answered this question many, many times. That is not the strategy. The strategy is to suppress this virus and that’s the national cabinet decision,” he said.

Mr Andrews also revealed he was yet to speak to the former minister following her resignation on Saturday.

Ms Mikakos, who quit after the Premier told the hotel quarantine inquiry that her department was ultimately responsible for the botched program, blamed Mr Andrews’ statement for her resignation in a scathing letter posted on Twitter.

Closing submissions were heard at the inquiry on Monday ahead of its report, due on November 6.

The inquiry was told that the disastrous quarantine program was responsible for 768 coronavirus deaths and more than 18,000 infections.

But amid the bitter fallout from Victoria’s second wave, there is good news.

On Sunday, Mr Andrews announced several Melbourne restrictions were being eased and the city’s curfew was dumped.

Rather than stick to a strict roadmap schedule, Victorian authorities will be guided by case numbers as they look to further ease restrictions.

But they will wait at least three weeks – the earliest date for the next phase to be announced is October 19.