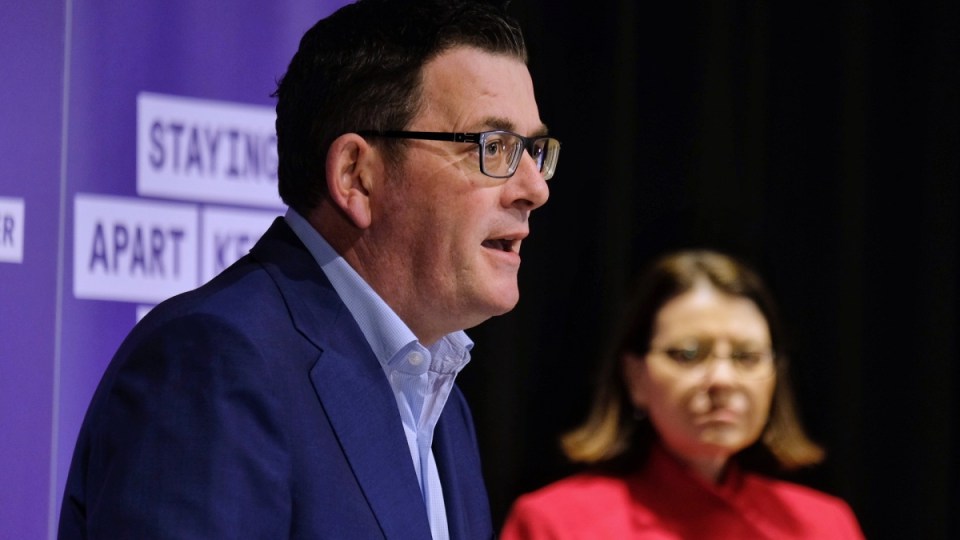 Daniel Andrews said it was the right decision for Jenny Mikakos to resign. Photo: AAP

Victorian Premier Daniel Andrews said he doesn’t want to talk about Jenny Mikakos’ resignation “ever again”, but was forced to fact-check a tweet from the former health minister on Victoria’s COVID strategy.

Ms Mikakos suddenly quit her ministerial position and left politics altogether on Saturday, after the Premier said responsibility for the state’s hotel quarantine program fell squarely at her feet.

On Monday, the inquiry into that program heard “a multitude of decisions, actions and inactions” led to its deadly failings.

On Saturday, Ms Mikakos tweeted she “cannot continue to serve in [Mr Andrews’] cabinet”, adding that she would “not be making any further public statements” – but several further tweets since have made headline news.

As Victoria logged just five new coronavirus cases on Monday, its lowest total since June, she tweeted “we are well on the way to eradication” – which prompted the Premier to clarify this was not the virus strategy of his state, nor the national cabinet’s agreed plan.

I am saddened to see more lives lost, my sympathy to their families. But I’m so pleased to see how low the numbers are. I’m so proud of Victorians and so grateful for the sacrifices made to get us to this point. We are well on the way to eradication. ❤️ https://t.co/wThKTZgRTd

“Eradication” is a technical term used by public health experts to mean zero new cases of the virus, with the disease totally wiped out except in research settings.

It stands in contrast to “elimination”, meaning no sustained community transmission, and “suppression”, referring to a plan for a very low number of cases over a long period of time.

The exact strategy for addressing the spread of COVID has been a bone of contention for epidemiologists, public health experts and politicians nationwide and globally.

The publicly-stated strategy of the national cabinet is “aggressive suppression”, but Australia’s relative success in dealing with the virus has led some to theorise that the country could try for eradication or elimination.

However, Mr Andrews said his state would not be going for that. Asked about Ms Mikakos’ tweet, which she posted just before the Premier’s daily press conference in Melbourne, he clarified her word of choice.

When asked if Victoria’s strategy was to shoot for eradication, Mr Andrews was blunt: “No, it’s not.”

“I have answered this question many, many times. That is not the strategy,” he said.

“The strategy is to suppress this virus and that’s the national cabinet decision.”

Eradication of COVID is a controversial topic for epidemiologists. Gavi, the Vaccine Alliance, said achieving it would “be very challenging and may not be technically feasible”.

UNSW public health experts Associate Professor Anita Heywood and Professor Raina MacIntyre argued in a recent article that “the prospect of eradicating COVID-19 is likely no longer feasible, even with a vaccine”.

“Future sustained outbreaks, like the current Victorian outbreak, will remain possible until we can vaccinate the population – even under an elimination strategy,” the pair wrote in July.

They also argue that the national cabinet’s strategy, “suppression”, “isn’t a known technical term” in epidemiology, and that it’s unclear exactly what it refers to in terms of virus numbers.

“You need a technical definition so that people know what they’re working towards,” Professor MacIntyre said earlier in September.

“You also need specific goals and ways to measure those goals.”

“We need an agreed definition – either a specified time period or a number of generations of transmission.”

Also on Monday, Ms Mikakos called out media outlets for camping outside her house. She asked that journalists “respect my privacy and safety”, and claimed her home address had been distributed widely.

Dear media, I won’t be doing interviews at my home. Please respect my privacy and safety. When I want to speak to you I’ll call you. As for the people who have distributed my home address widely I have no words.

Mr Andrews, asked for a third day in a row about the circumstances of her departure, appeared frustrated at what he claimed were questions he had already answered.

“I have gone to these matters in some detail. I don’t particularly
want to be labouring the point,” he said.

“Yesterday I made comments. I will make them again. Jenny was a very hard-working member of the team. I wish her well. I don’t propose to be trawling over this every day or three times a week or ever again. I don’t think it necessarily serves any purpose.”