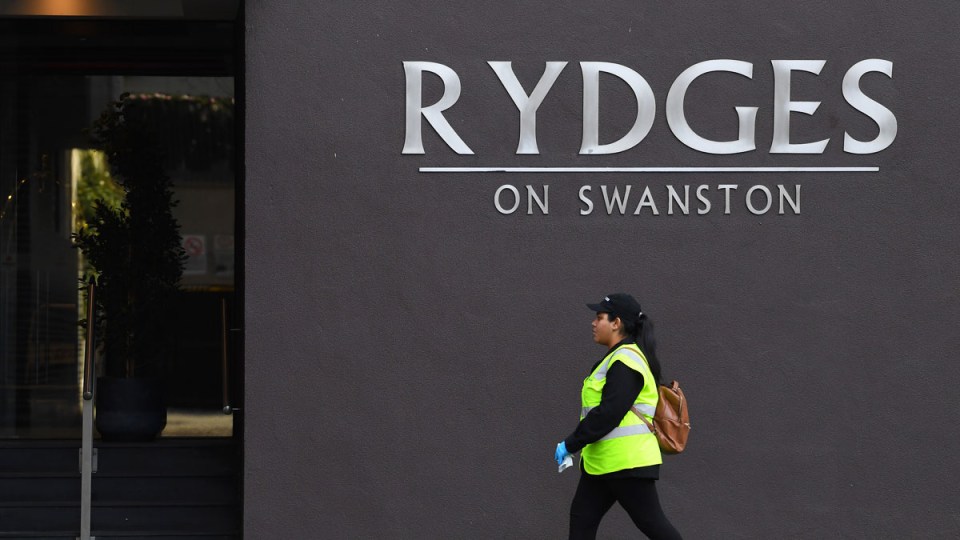 Victoria's hotel quarantine program failed due to a ‘multitude of decisions, actions and inactions’. Photo: AAP

Victoria’s hotel quarantine program is responsible for 768 deaths and more than 18,000 infections, the inquiry into the scheme has heard.

Delivering his final submissions, inquiry lawyer Ben Ihle said the program had failed to meet its primary objective, which was to keep the community safe from the virus.

“The program that was intended to contain the disease, was instead a seeding ground for the spread of COVID-19 into the community,” Mr Ihle said.

“The failure by the hotel quarantine program to contain this virus is, as at today’s date, responsible for the deaths of 768 people and the infection of some 18,418 others.

“One only needs to pause and to reflect on those figures to appreciate the full scope of devastation and despair occasioned as a result of the outbreaks.”

The inquiry has previously heard that 90 per cent of the infections in the state’s second wave could be traced back to a family of four who served their quarantine period at the Rydges on Swanston hotel.

Earlier on Monday, the inquiry heard Victoria Police’s preference for private security to be used in the program contributed to a “creeping assumption” among authorities that the decision had been made.

Counsel assisting the inquiry, Rachel Ellyard, said on Monday morning it was “astonishing” that not one senior member of the Victorian government could determine where the decision originated.

Ms Ellyard said a meeting at the State Control Centre at 4.30pm on March 27 was a major factor in the final determination to use private security.

“It is a conclusion that was arrived at by way of a creeping assumption, that took hold over a period perhaps of a couple of hours, and that wasn’t questioned by anyone,” Ms Ellyard told the inquiry.

The decision to use private security has been widely blamed for the virus escaping quarantine, causing Victoria’s devastating second wave.

Ms Ellyard said evidence showing Victoria Police Assistant Commissioner Mick Grainger’s preference that private security be used was at odds with evidence given by former Chief Commissioner Graham Ashton, who said he was not involved in the decision.

“Mr Ashton’s certainty the decision had been made and communicated with him is at odds with the understandings of everyone else at that State Control Centre meeting,” she said.

“And so, it may well be that Mr Ashton is misremembering the sequence of events. But in our submission the Board should not take the view that a final decision had been made either at any time prior to the State Control Centre meeting,” Ms Ellyard told the inquiry.

Ms Ellyard stated that the position established by police would have been a significant factor in the ultimate move to engage contractors which she said was not a decision but a “creeping assumption”.

“It wasn’t Victoria Police’s decision … but Victoria Police’s clear position expressed in that meeting, that private security would be, in its view or its preference, the appropriate first line of enforcement, has to be understood as a substantial contributing factor to that creeping consensus,” Ms Ellyard said.

Ms Ellyard also told the inquiry the Department of Health and Human Services was in charge of the botched program.

She said the department’s focus on logistics was too great and the health response was “underdone”.

“It did become an example of a poorly managed emergency and the primary reason for that seems to be that DHHS did not sufficiently bring to its management of this public health emergency the health expertise which had been the basis of it being allocated as the control agency.”

In earlier submissions on Monday,counsel assisting the inquiry Tony Neal QC said no single decision or person caused the failure of the scheme.

Mr Neal said politicians and bureaucrats faced a complex and “unenviable” task when they were given the job of setting up the program in less than two days in late March.

“There was simply not the time to translate a policy into a plan and then realising that plan,” Mr Neal told the inquiry.

“An enormous, immediate, unenviable burden was placed on those in public service to establish not one but a succession of infection control facilities in buildings clearly not designed for quarantine purposes,” Mr Neal said.

Mr Neal told the head of the inquiry, Jennifer Coate, that 29 hotels were selected by the Department of Jobs, Precincts and Regions as quarantine facilities but only 20 hotels were ultimately used.

He said the Department of Health and Human Services later determined which hotels would be used, adding that the program “failed disastrously in two of those hotels”.

“There’ll be no suggestion from those assisting that those engaged in setting up this program worked other than with the best of intent or to the best of their ability,” he told the inquiry.

“Bad faith or corruption is not what the evidence shows.”

“It will be not be suggested that a single decision or a single actor caused the hotel quarantine program to fail in its objective to prevent the spread of COVID-19 in the community,” Mr Neal said.

The $3 million inquiry has heard from more than 50 witnesses, including Premier Daniel Andrews, Cabinet ministers and senior public servants.

On Friday, Mr Andrews told the inquiry that he believed his Health Minister, Jenny Mikakos, was responsible for the program.

She resigned the next day.

Ms Coate has told the inquiry that evidence on “lines of accountability” has been “varied”.

She is due to deliver her final report to the Governor of Victoria, Linda Dessau QC, by November 6.