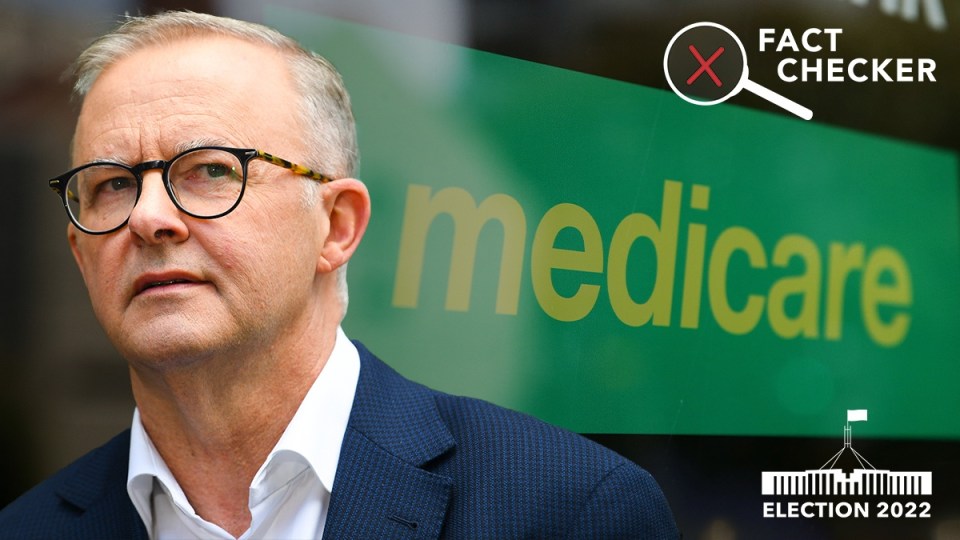 Labor has made a series of claims about Medicare that don't stand up to scrutiny. Photo: TND

The above claim, tweeted by the Australian Labor Party last week, is the cornerstone of the opposition’s strategy to scare voters about the Coalition’s health policies during the election campaign.

But many of the claims Labor has made about Medicare are false or misleading.

Labor’s latest attacks on Coalition health policy echo its approach during the 2016 and 2019 campaigns, when it had success with voters scared about cuts to Medicare.

The broad claim is still that, if re-elected, the Coalition will cut spending on Medicare services.

But there are new elements this time around, including attacking Health Minister in waiting Senator Anne Ruston over comments she made in 2015 arguing Medicare was “not sustainable” and must be changed.

Labor leader Anthony Albanese said Senator Ruston’s appointment showed that if the Coalition is re-elected then Australia will “see more cuts to Medicare over the next three years”.

Senator Ruston’s remarks were made under the Abbott government when it was pursuing substantial cuts, including GP co-payments – but these policies have long since been dumped.

More recently, Senator Ruston ruled out Medicare cuts if the Coalition is returned to government.

“Our government has been absolutely clear that we are not cutting Medicare,” she said.

According to 2022-23 federal budget papers, the government expects spending on medical services and benefits – the sub category that includes Medicare and Private Health Insurance rebates – to rise from $38.9 billion in 2021-22 to $43.9 billion in 2025-26.

“Growth in Medicare expenses is the major driver of growth in this sub-function,” the budget said.

So in that sense, Labor’s claim that Medicare spending will be cut is false.

But as Labor points out, the Coalition has made this promise before and broken it.

In 2013, Tony Abbott said he would not cut health spending if elected, but then tried cutting it when handed the keys to the Lodge.

“They [the Coalition] attempted to destroy Medicare in many ways, including compulsory co-payments,” Dr Duckett said.

“It is the very same government [the Coalition] that has this track record.”

So, Labor is on solid ground casting doubts over Coalition promises about future Medicare spending, based on their record.

But less concrete are their subsequent claims about the Coalition’s Medicare policies. And some are baseless.

For example, on April 14 Labor campaign spokesperson Jason Clare claimed that “at four elections in a row, the Liberal Party has promised to scrap Medicare”.

This is false: The Coalition has not proposed abolishing Medicare during the past four election campaigns.

TND asked the Labor Party for evidence to back up this claim, but it offered nothing.

More broadly, Mr Clare, Mr Albanese and shadow treasurer Jim Chalmers have all argued that the Coalition wants to “undermine” Medicare and will “weaken” it if they’re re-elected in May.

But do these claims stack up? TND broke down two key points in Labor’s Medicare attack.

Firstly, Labor argues it has become more expensive to see a doctor under the Coalition since 2014.

Secondly, it has attacked changes to more than 900 Medicare Benefits Schedule (MBS) items in 2021, suggesting these reforms were healthcare cuts.

But has it become more expensive to see a doctor? Well, yes and no.

Yes, because out-of-pocket fees for Medicare services that aren’t bulk billed have risen under the Coalition, partly because rebate indexation was frozen for the majority of its time in power.

No, because fewer people are paying out-out-pocket fees under Medicare.

In other words, although it has become more expensive for people to see a doctor, there are fewer services for which Medicare users are charged out-of-pocket fees.

Labor brought in the rebate indexation freeze in 2013, but the Coalition then opted to extend it, meaning rebates “fell behind in real terms”, Dr Duckett said.

The freeze ended progressively between 2017 and mid-2020, though many doctors argue it has left a legacy of higher out-of-pocket fees.

Average annual patient contributions under Medicare were $73.40 in 2021, according to Department of Health figures.

That’s higher than the $58.10 (inflation-adjusted) figure from 2014 – though this also reflects changing types of care.

The proportion of Medicare services that are bulk billed has increased from 77.2 per cent to 81 per cent since 2014.

The rise is even greater for GP services, for which bulk billing has risen from 83.4 per cent to 88.8 per cent.

On the whole, there’s more to the story than Labor suggests.

The second ALP attack focuses on the government’s changes to more than 900 MBS items.

These reforms changed which medical services were subsidised by the taxpayer from July 2021, including orthopaedics, general surgery, GPs and primary care services.

The ALP argued these changes amounted to cuts to Medicare, but Dr Duckett thinks this attack is unfair.

He said the MBS changes – recommended by an expert review – largely targeted redundant procedures, duplication and other Medicare “rorts”.

“They’re things that any government would do,” he said.

Patient advocates even said out-of-pocket expenses would fall for some procedures under the changes, though the government was criticised for how quickly it implemented the shake-up.

“By and large, the changes are technocratic,” Dr Duckett said.

“I don’t believe it’s a fair criticism of the Coalition.”

Labor did not respond to TND when asked whether it would repeal the MBS changes if elected.

On the whole, Labor’s various attacks on the Coalition’s Medicare policies are misleading.

Its bid to characterise the election as a choice between Mr Morrison and Medicare ignores Coalition promises not to cut healthcare spending if it is re-elected.

That said, the core of Labor’s claims rest on mistrust after the Coalition’s broken promises in the 2013 election, which have been substantiated.

Voters must ultimately decide if they can trust the government to keep its promises.