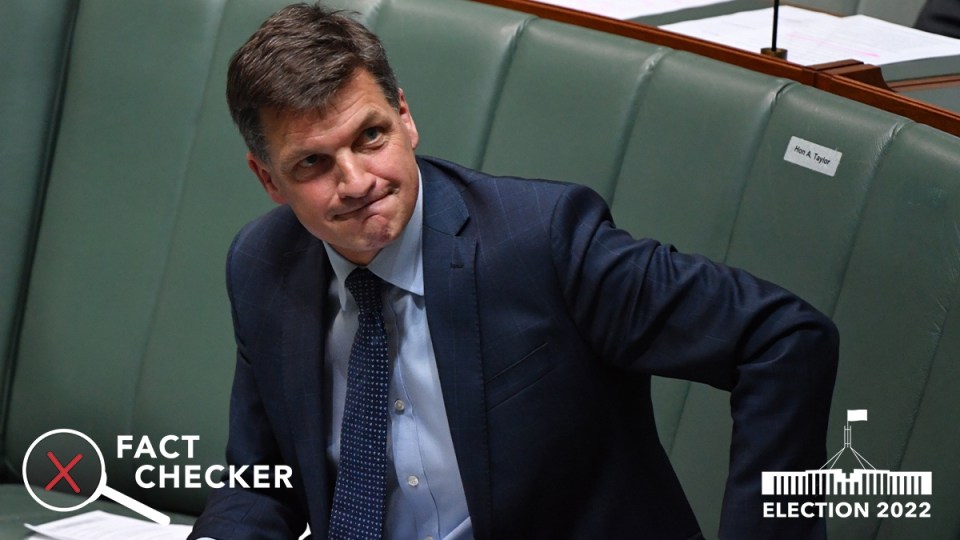 Energy Minister Angus Taylor has been caught in a ham-fisted attempt to scare voters about Labor’s climate policies after it emerged that a story he placed in the media this week was based on false assumptions.

Mr Taylor’s office provided secret modelling to a front-page Herald Sun story on Tuesday that claimed Labor’s Rewiring the Nation plan would increase electricity prices by $560 per year in the next decade.

But it has since emerged that the data was based on false assumptions.

Although Mr Taylor has refused to publish his evidence, The New Daily has confirmed that Labor’s policy would only invest up to $20 billion in new transmission projects – 75 per cent less than Mr Taylor claimed.

Such an investment broadly aligns with the Australian Energy Market Operator (AEMO)’s latest draft integrated systems plan (ISP), which outlines up to $18.6 billion in new network costs as Australia transitions away from fossil fuels and towards more renewable energy sources.

AEMO said this could deliver up to $70.2 billion in benefits for consumers – a far cry from the higher electricity prices Mr Taylor claimed would flow from Labor’s plan.

Labor’s climate modelling predicts annual average retail power bills could fall by about $378 under its pledge to cut Australia’s carbon emissions by 43 per cent below 2005 levels by 2030.

When pressed on the $78 billion claim on Tuesday, Mr Taylor said it was Labor’s figure and suggested journalists ask them about the data instead.

And so The New Daily did.

The source of this number is found in the economic modelling Labor commissioned for its 2030 plan, conducted by RepuTex.

On page 12, the Rewiring the Nation proposal includes two investment figures Labor has proposed to achieve its promised emission targets.

The first is a $20 billion public investment in Australia’s electricity grid (the poles and wires) – designed to modernise the network.

The second figure is an assumed $58 billion pool of private investment, which RepuTex believes will be unlocked by Labor’s $20 billion pledge.

Mr Taylor added these two figures together to reach his $78 billion claim.

He claimed investing so much money in the value of the electricity grid would force regulators to approve higher prices for retailers, which would then be passed on to consumers.

But TND confirmed the $58 billion in unlocked private investment would extend across renewable energy generation and distribution projects – and not just be invested in the electricity grid.

TND understands that RepuTex’s assumptions about unlocked funding flow from the idea that investment in the electricity grid would create new opportunities for private companies to invest in renewable energy zones and storage projects – improving Australia’s supply of electricity.

All else equal, higher energy supply pushes down prices, according to energy experts.

“Anyone who thinks they can make accurate projections of what prices will be in two years’ time, let alone 10 years’ time, is having a bit of a lend of themselves,” Mr Wood said.

Mr Taylor’s spokesperson claimed “many independent energy experts” have “lined up to point out the flaws in Labor’s transmission plan”.

The Minister quoted Mr Wood and two other electricity market experts in his Tuesday morning press release, grabbing a handful of old quotes in an attempt to trash Labor’s climate policies.

The New Daily spoke to all three experts – including Victoria University’s Bruce Mountain and Frontier Economics’ Matt Harris – who confirmed Mr Taylor didn’t contact them about the claims before publishing them.

If Mr Taylor had, the experts would have warned him that the $78 billion figure on which his analysis relied was unlikely to be earmarked purely for investment in the electricity grid as the minister suggested.

Mr Wood and Mr Harris were both sceptical that the $58 billion in private investment expected to be unlocked would only go into transmission.

This would supplement existing protections that require regulators to do rigorous cost-benefit analysis before approving transmission projects.

It’s not the first time Mr Taylor’s office has been accused of attempting to hurt his political opponents by dropping dodgy news stories to the press.

It cited data in the council’s annual report, which was provided to the Telegraph.

But on closer scrutiny it emerged the document was not authentic and had, in fact, been doctored.

Mr Taylor later faced calls to explain the document’s source after it sparked a police investigation, which was later dropped, with federal police saying they did not reach a conclusion about whether the document had been altered or who had altered it.