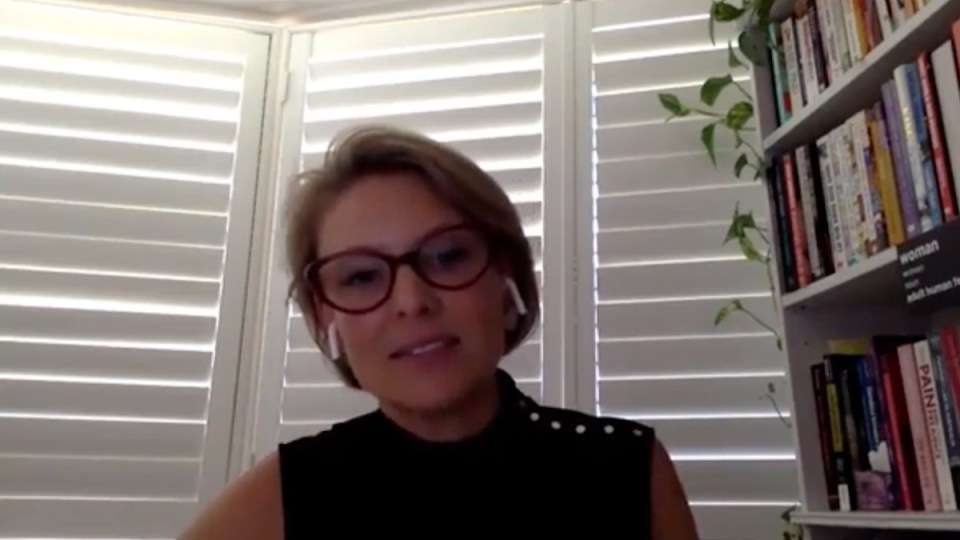 Scott Morrison’s hand-picked Warringah candidate threatens to split the Liberals again as her previously unreported attacks on the trans community can be revealed to include condemnation of party MPs who voted to safeguard trans schoolchildren against discrimination.

Katherine Deves, a lawyer and women’s sports activist, was one of nine Liberal candidates installed by the Prime Minister after his recent takeover of the New South Wales party bypassed democratic preselections.

After she was revealed to have called trans children “mutilated”, Mr Morrison resisted calls to dump her, including from the NSW Treasurer and leader of the state’s powerful moderate faction, Matt Kean, who called the comments “horrendous”.

On Sunday, the disquiet seemed to have reached cabinet. Foreign Minister Marise Payne, a moderate stalwart, would not tell the ABC’s Insiders if she thought Ms Deves should be dumped, insisting: “It’s a matter for the organisation in New South Wales”.

Further anger might yet move the faction to exercise its power over the party to test the Prime Minister.

Ms Deves would frequently offer public comment on transgender issues including draft laws before parliaments. She argued against granting legal rights to transgender people or policies promoting their inclusion because they would, she claimed, give rise to sexual assault or violence.

Discussing a Victorian bill stopping people from changing or hiding others’ gender identity, Ms Deves implied that trans partners could be unusually violent and did not need extra legal rights in the home.

“What the trans widows have come forward with are the most egregious examples of coercive control and violence that I’ve ever seen,” she said in an interview with University of Melbourne academic Holly Lawford-Smith.

(‘Trans widow’ is a term, considered offensive by many, to describe a woman whose male partner has come out as a trans woman.)

In another online video Ms Deves said it would not be until a child “martyr” became severely injured or died that her campaigns against allowing transgender children in sports would be taken seriously.

“We’re standing here ringing the bell … [but] until people, mums and dads, see the men coming into the toilets, or the boys dominating their daughter’s teams or a young girl who’s going to be our martyr as a poster child in a wheelchair on ventilation or dead and even then […they won’t realise…],” she said.

Ms Deves again invoked the spectre of violence when offering her view to a New Zealand  parliamentary committee on a bill that would let people change the gender listed on their government records (it soon passed into law unanimously).

“It enables abuse and harm by men,” she said of the bill.

“The New Zealand legislature cannot say they were not warned […] the  blood of these women will be on their hands.”

“Predatory men, in every institution, in every organisation, they will pursue a career; they will be volunteers; they will put themselves forward as being very charming and likeable to get access to your kids,” she said.

Last month, as moves were in train to officially deliver her preselection, Ms Deves gave a speech attacking Liberal MPs who had just crossed the floor to amend the government’s signature religious discrimination bill to include protections for trans school kids.

MPs splitting with their party included Trent Zimmerman (joint leader, with Mr Kean, of the NSW moderates) and others aligned to the same group: Dave Sharma, Fiona Martin and campaigning from the Senate, Andrew Bragg.

“Endorsed candidates for the Liberal Party campaigned expressly or implicitly for the [Religious Discrimination Act] that was part of the party’s campaign platform, yet five Liberal Party members crossed the floor,” Ms Deves said.

“They believed [the government’s bill] was discriminating against trans kids. Kids we recognise as confused and misled by identity politics; traumatised girls abandoning womanhood, kids […] convinced they were born in the wrong sex and have the wrong body.

“How does it serve these kids to push them down a medicalised path? Or play the game of wilful pretend that they are the opposite sex?”

Ms Deves suggested the MPs were part of a “trojan horse” movement for “gender identity” which expanding sex-based discrimination laws to provide for those who had a sex development “disorder”.

Using it to steer change would, she said, lead to the “insidious and stealth erosion of safeguards for women and children” and the “systematic destruction of women’s human rights”.

“Do we really want this to be the end for women and girls?” Ms Deves asked.

“History tells us that this foreshadows the end of civilisation.”

Mr Zimmerman and Mr Sharma are facing challenges from progressive independents in inner-Sydney seats where Ms Deves is expected to now pose a deterrent to many voters.

Mr Morrison has only just tamped down Liberal infighting that crowded out much of the pre-campaign period.

Most of this came from the party’s conservative wing.

The Liberal moderates are by contrast the dominant grouping in NSW with the most control over the party executive that can disendorse candidates.

A veteran Liberal campaigner from Sydney said Ms Deves’ preselection was inflaming tensions across the Liberals not just moderates.

“Many are simply offended by misplaced comparisons to Nazis,” the source said.

“It’s an extraordinary mess of the Prime Minister’s making.”

Jacqui Munro: Out with the old, in with the new political script
Michael Pascoe: The federal election campaign is silent on the issues that count
Today's Stories